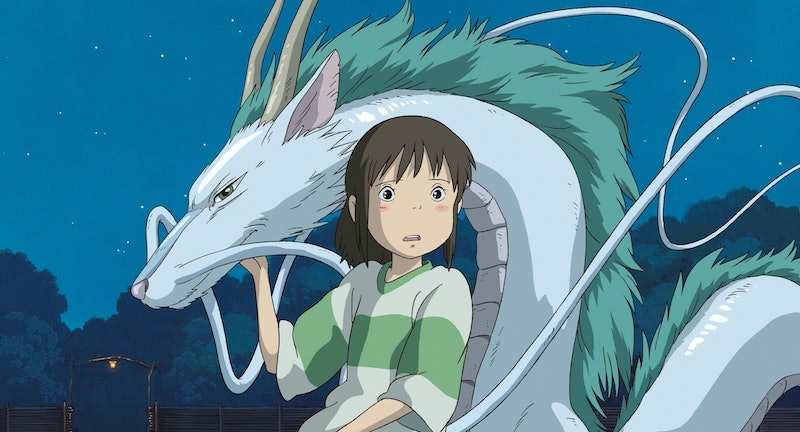 I was afraid of things as a child. I use things advisedly — loose, indistinct, vague — because there was no theme tying these fears together. I was not — still am not — a risk-taker. On the swing set, I was paralyzed by the fear that the swing would swing in a full 360, carrying me with it, just as I'd seen it do on TV. My collective fears ranged from the mundane (heights, spiders, roller coasters) to the borderline-ontological (loneliness, deaths of pets and family members). Alone, none were particularly phobic, and most of them were typical childhood fears, but taken as a group, they felt debilitating. If I had been born in the Victorian era, they would have called me "sensitive" and hooked me up with Freud to decipher my dreams. But I wasn't, so in lieu of psychoanalysis I had a few favorite movies I came back to time after time. And among those, Hayao Miyazaki's Spirited Away still stands out as one I will watch again and again.

A small, timid girl with dark hair and bangs, Spirited Away heroine Chihiro felt like my own cinematic stand-in. At the outset, she and her family are en route to a new town. Chihiro sulks in the back seat, resentful of being uprooted from her childhood home to a new school and new friends. The family gets lost on a precarious dirt road and find their way to an abandoned (and truly menacing) former fairground where the smell of barbecuing food still lingers in the air. But there's also a curse on the grounds, and Chihiro's parents are transformed into pigs — a nod to the gluttonous spread of barbecue they consume — forcing the young girl to strike out on her own, navigating a perilous bathhouse, an evil witch, and a mysterious dragon-stranger to rescue her pig-parents from the slaughter.

Spirited Away is a serious, scary movie, and it's the film that wised me up to Miyazaki. It's at once gorgeous and gripping and wrenching, and it features one of the best young female protagonists from a director already known for his strong female protagonists (Kiki of Kiki's Delivery Service, Satsuki and Mei of My Neighbor Totoro, the wolf princess San of Princess Mononoke). Spirited Away depicted a young woman overcoming the very uncertainties and fears that I saw all around me — and that initial parallel was just a bridge into totally identifying with this meek, yet ultimately triumphant heroine.

1. Chihiro Might Be A Whiny Brat, But That Doesn't Mean She's An Invaluable Character

In 2013, Publisher's Weekly interviewed writer Claire Messud, author of the then-recently released The Woman Upstairs. Messud was asked, "I wouldn't want to be friends with Nora, would you?" referring to the novel's thoroughly unlikable yet thoroughly real main character. "For heaven's sake, what kind of question is that?" Messud responded. "If you're reading to find friends, you're in deep trouble. We read to find life, in all its possibilities."

Chihiro might not be an anti-hero in the vein of Humbert Humbert or Raskolnikov, both of whom Messud references in her response, but she's far from the precious, sympathetic child adults often write. She whines, she sulks, and she ignores her parents. Yet even Messud's response seems a bit too absolute for the nuances of Chihiro's character — she's not someone you'd immediately hope to befriend, but she became one of my closest movie friends as I watched Spirited Away time after time.

2. Her Parents' Transformations Take Place In One Of The Scariest Scenes In Anime

Miyazaki's films run the gamut from all-ages-welcome, like My Neighbor Totoro, to the gruesome and mature, like Princess Mononoke. So the sickening scene at the beginning of the movie when Chihiro's parents eat themselves ill, catalyzing their transformation into literal pigs, is perhaps not too much of a stretch. Still, it pushed the boundaries of what I'd seen in film, and what American audiences expect from animated movies. Even after many viewings, I still feel a visceral cringe in my stomach when I know the parents are about to look up from their food, still wearing human clothes but their bodies transformed into pigs.

3. I Will Never Not Get A Kick Out Of Holding My Breath When Chihiro Crosses The Spirit Bridge

In order to cross the spirit bridge without being caught, and escorted by the mysterious Haku, Chihiro must hold her breath along its entire length. I made myself dizzy holding my breath with Chihiro to test whether it were realistic or not — because, of course, realism is the most integral element of a movie entitled Spirited Away.

4. The Witch Yubaba Is Both Mother And Evil Overlord

The proprietor of the bathhouse where Chihiro eventually finds work, Yubaba rules her kingdom with sorcery and rage. Not only does Spirited Away have a female heroine, but its primary villain is also a woman. And not just that, but Yubaba is a woman who is both at the top of the hierarchy and a mother. A woman's maternal function does not define her, and it's heartening to see a female antagonist who pretty much has it all.

5. Under Yubaba's Spell, Chihiro Starts To Lose Herself, Too

Just as her parents lose themselves to their basic instincts, Chihiro starts to lose herself too. Yubaba physically extracts her name, Chihiro ("Such a pretty name," she says), and replaces it with the plebeian Sen. Without her name to anchor her, Sen starts to forget why she came to the spirit world in the first place, and must keep reminding herself of her duty to rescue her parents and overthrow Yubaba. The process felt like it reflected my own amorphous childhood fears of losing my family, for who are you without family and name?

6. Beneath The Fantasy Exterior, Sen Is A Young Woman With The Same Fears And Anxieties As Any Other

"She's so fearless" is a common praise for daring young female characters — but Sen's value is deeper than that. She has fears (plenty of them), yet she manages to conquer them to achieve her ends. Even when these fears are of the most superficial variety, like a hair-raising distaste for high heights.

7. But Then, The Dust Motes Are Adorable

Even the most terrifying scenarios must have its moments of levity, and the tiny carbon-based motes provide that in droves.

8. Even No-Face Is Not What He Initially Appears

Amid the disperse threats that the spirit world holds for humans (from pig curses to evil witches), there's No-Face, the monster who even threatens the spirits he encounters. He consumes everything in his path, wreaking havoc in the bathhouse. He's the kind of monster a young person might picture under her bed, ready to grab her ankles and pull her under if she doesn't pay sufficient attention.

But No-Face is also under a curse. No character in Spirited Away is what he or she initially appears — Yubaba is also doting mother; Haku is both faithful servant to Yubaba and Sen's spirit guide; No-Face is both rabid monster and timid sidekick. I began this piece by noting that Sen and Chihiro's brazen confrontation of her fears helped me understand my own. But beyond that, the constant reversals and developments serve as evidence that even those fears are not what they seem at first blush. Even the nastiest monster might just need a friend and a hot bath.

10. It Perfectly Captures The Feeling Of Being Alone

Every young person feels alone at various points. Spirited Away captures that sense of being misunderstood and isolated, and then goes on to prove that all the while, there is a crew of otherworldly beings at your back.

11. And In The End, Chihiro Saves The Day

Sen's final challenge before she earns freedom for her parents and is reunited with her name is to determine which pigs among a pen full of transformed beings are actually her parents. It turns out, none of the options are her parents — and she realizes it.

I'm reluctant to moralize too much about one of my favorite movies, because in the end, much of its appeal is an ineffable cinematic magic rather than any specific reason. Yet Spirited Away offers young audiences a movie that doesn't pander, doesn't shy away from the grotesque and the horrific, and features a female character who might not be classically "strong," yet still saves her family and the spirit world in the process. She's strong on her own terms. The movie is scary and sometimes nauseating, but its greatest strength is the constant conviction that nothing is as it seems — and a character's strength is based in her ability to recognize that.