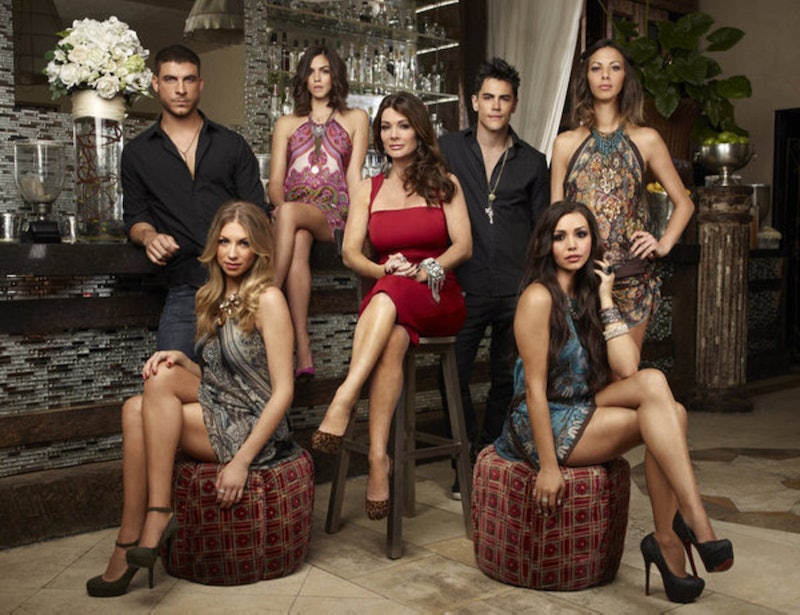 Looks like everyone and their moms really did tune in for Vanderpump Rules (and that epic slap) this past week: According to Wetpaint, the most recent episode of Vanderpump Rules did impressively well in the ratings, managing to pull in a total of 1.9 million viewers — 22% higher than last week's episode. While these numbers may seem slightly low compared to a network show, for cable, these are pretty great stats — especially considering the season two premiere pulled in 1.19 million viewers total. Also good for comparison: The much bigger show it spun off from, The Real Housewives of Beverly Hills, only pulled in about 1.15 million viewers. Not bad, and definitely higher than the previous week, but still, Vanderpump Rules wins the night.

This is great news when you consider it along with the fact that all of the drama between cast members seems to be legitimately real — it means that the show has a great chance of being renewed many times in the future (according to cast member Jax, Season 3 is already official), as long as it remains inexpensive for Bravo to produce and engaging for the audience. In other words: As long as the cast members keep fighting, we'll keep getting to watch it all.

And now, for the infamous slap...

More like this
This 'Emily In Paris' X 'The Hills' Crossover Is Très Chic
By Marenah Dobin
'Bachelor' Star Cassie Randolph’s Sister Is In The 'Yellowstone' Spinoff '1923'
By Grace Wehniainen
We Finally Have Some Answers To How Heather Gay Got A Black Eye On 'RHOSLC'
By Samantha Rollins
Paris Hilton & Carter Reum’s Relationship Timeline Includes A Surprise Baby Boy
By Bustle Editors
Get Even More From Bustle — Sign Up For The Newsletter
From hair trends to relationship advice, our daily newsletter has everything you need to sound like a person who’s on TikTok, even if you aren’t.