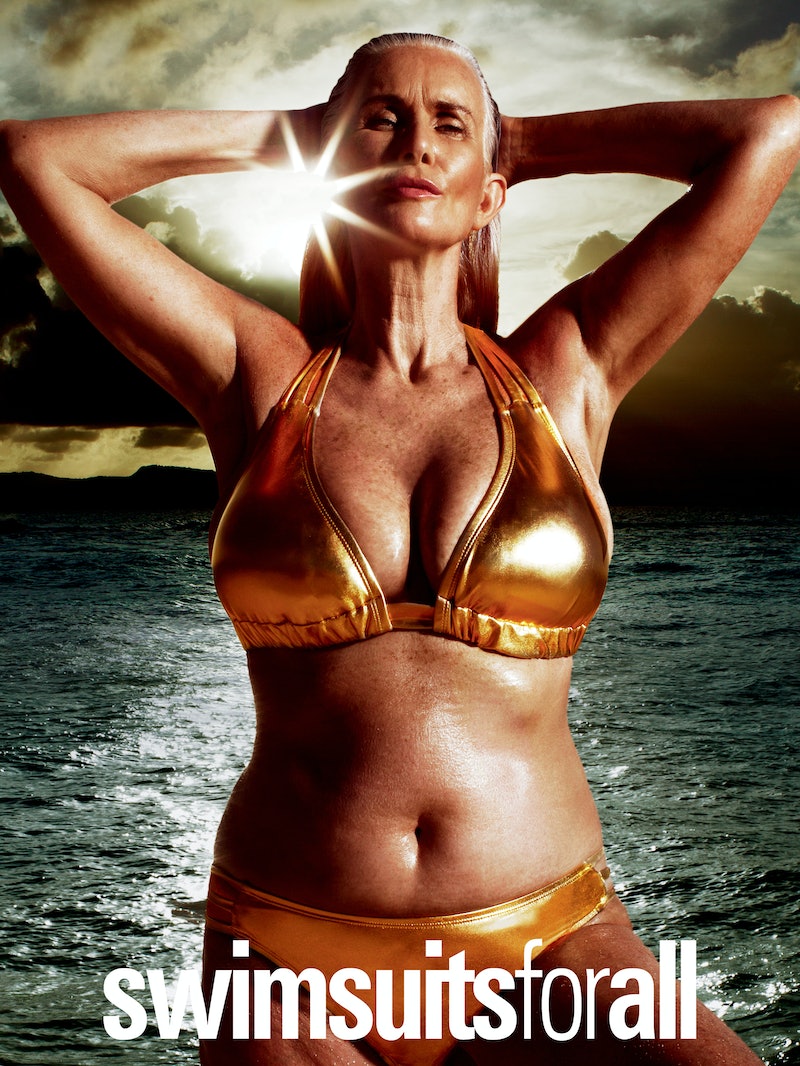 There was a time when the swimsuitsforall #SwimSexy campaign wouldn't have made headlines. In fact, a decade ago, a campaign like this most likely wouldn't have been created at all. And it certainly wouldn't have been in the pages of the iconic Sports Illustrated Swimsuit Issue — pages previously reserved for thin, conventionally beautiful models shown serving their best bikini bodies and subconsciously reminding everyone that, when it comes to the mainstream, only one type of body could ever be beautiful.

But thankfully, things are changing. In fact, they've been changing for a while now. Body positivity has found its way to the mainstream as a movement with radical origins that's morphed into something palatable for the masses. While society-wide acceptance of every body, regardless of age, race, gender, size, and ability is still farther off than many of us would like to admit, there are steps being made in the right direction. Swimsuitsforall is a brand that's trying to take those steps.

As a swimwear leader for a wide range of sizes, the brand's identity is focused on subverting traditional narratives of sexiness. In 2015, the brand created a viral frenzy with the #CurvesInBikinis campaign, starring plus model Ashley Graham, which was featured in the Sports Illustrated Swimsuit Issue.

For 2016, swimsuitsforall is taking things a step further.

The new #SwimSexy campaign features three models: Nicola Griffin, a 56-year-old model who will be the oldest woman to grace the pages of the Swimsuit Issue ever, British Ghanaian model Philomena Kwao, and Ashley Graham.

"I never thought that I would be in Sports Illustrated, especially not in a bikini," Griffin tells me in an email. "I am so delighted and thankful to have had this opportunity to open peoples’ eyes to different types of sexy. Women are beautiful in their own skin, regardless of age, size, and stretch marks — whatever! I am proud that as a 56-year-old woman, my daughters can see different representatives in the media — we should see people we relate to in advertisements and editorial features."

The demand for more relatable imagery from advertisements and in media is one that's been growing for some time. The call for diversity in mainstream media has manifested itself in clothing lines, social media campaigns, and advertising. Swimsuitforall's #SwimSexy Campaign might simply be the latest manifestation of those demands, but something about its presence in Sports Illustrated's Swimsuit Issue feels like a bigger attempt at moving larger conversations about self-acceptance into the public consciousness.

Together with Griffin, this trio's presence in this type of publication will likely appeal to audiences that were completely ignored in the past. In other words, this single campaign is starting conversations about size, race, and age in an industry that previously only had room for one type of each.

"#SwimSexy is a huge step, because we are shaking up what society considers to be beautiful," Graham tells me in an email. "Especially since the campaign is within the Sports Illustrated Swim Issue, it really makes readers pause, think about themselves and how they fit into the limitations of what society thinks is beautiful."

"As a woman of color and curve model, I have been very fortunate and blessed by the opportunities I’ve had so far in my career," Kwao writes in an email. "The industry is getting better, though there is still a lot of work that needs to be done. It is positive to see more brands like swimsuitsforall that are addressing the issue of color diversity and including models of different races in their campaigns."

The Sports Illustrated 2016 Swimsuit Issue will hit newsstands on Feb. 16, and Graham, Kwao, and Griffin's presence will undoubtedly make an impact, perhaps on more levels than it ever has before. And for its history-making star, it's perhaps most pertinent to mature women who have never been able to pick up a magazine and see themselves represented like this before.

"I think that society needs to work to make older women feel included and accepted," Griffin tells me. "#SwimSexy is a step in the right direction, and I hope that the public will view women as a whole sexy in their natural curves and age. This is an incredibly exciting time!"

Griffin is right: When it comes to body positivity finding its way into the mainstream, it is an exciting time, one that feels like finding beauty in all bodies is possible — even if we aren't quite there yet. In some ways, it seems like campaigns like this one are doing two jobs: In one respect, they're making waves by giving platforms to groups that were previously pushed to the side — like plus size women, women of color, and women over 40. Here, in the pages of a magazine that once only featured a certain type of model, their unapologetic presence feels powerful.

But another important, yet far less obvious, effect of campaigns like these is the fact that they spark further conversation about how society, brands, and the media at large can still do better in the future. Campaigns like #SwimSexy have the power to inspire consumers by presenting them with what it looks like to buck convention. But instead of saying "this is what beauty looks like," it begs a far more important question: Where can beauty go from here?"

More like this
Instagram & Facebook May Finally Lift Their Notorious Nudity Ban
By Allie Fasanella
Selena Gomez Dismissed Trolls' Comments About Her Body After The Golden Globes
By Stephanie Topacio Long
Phoebe Dynevor Serves ‘Bridgerton’ Underboob In Stunning Floral Gown
By El Hunt
Here’s Your Daily Horoscope For January 27, 2023
By Mecca Woods
Get Even More From Bustle — Sign Up For The Newsletter
From hair trends to relationship advice, our daily newsletter has everything you need to sound like a person who’s on TikTok, even if you aren’t.