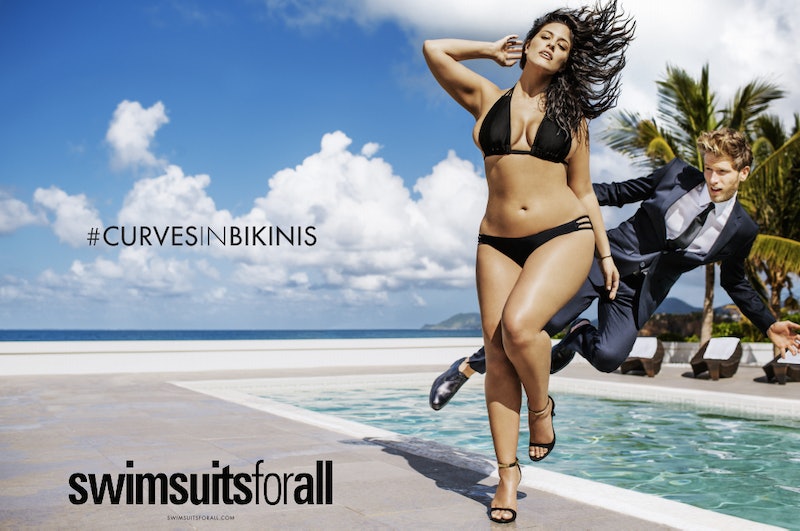 "One standard of beauty has dominated our world for so long, but the change is definitely happening. The fact that you can now see an extremely curvy girl on the pages of Sports Illustrated speaks for itself," — so says Ashley Graham (plus-size model, lingerie designer and vocal spokesperson for the beauty in curves) in an exclusive interview with Bustle. Referencing the newly released 2015 Swimsuit Issue — or in other words, that annual issue that some of us love, some of us hate, and some of us — mostly bros — even fawn over.

For most of my life, I've fallen somewhere in the aforementioned "hate" category. Bored by the homogeneity of like-bodied models, I've steered clear. There's usually nothing in there for me — nothing to relate to. No bikinis to fit my mountainous bottom. Don't get me wrong, since its inception in 1964, the swimsuit issue has produced some stunning work (Christie Brinkley's 1981 bedazzled cover suit still making me see glitter and gold), but for over 50 years, Sports Illustrated cover girls — not to mention the models gracing the magazine's pages — have fallen short in the body diversity pool. Until now. Yesterday, on February 9th, the 2015 Swimsuit Edition hit newsstands, and in case you haven't been paying attention, this release features both an editorial of plus-size model Robyn Lawley and an advertisement of Ashley Graham herself. So let me translate: For the first time ever, the issue will be featuring not one, but two, plus-size models within its pages. Personally, I'm particularly excited when it comes to Ashley's ad.

"It is in our power to change the convention, and once women learn to accept and embrace their curves, the world will follow," says Ashley, after appearing in an advertisement for Swimsuitsforall (a.k.a. the amazing plus-focused swimsuit retailer that has launched three swimsuit collections with Gabi Gregg), where she's wearing an itty-bitty string bikini (a.k.a. the sexiest thing). Funnily enough, S4A remade 2014's swimsuit edition cover for fun (you know, the 50th anniversary issue that featured models Chrissy Teigen, Nina Agdal and Lily Aldridge with bare backs and thonged bikini bottoms). Their rendition featured voluptuous beauties Gabi, Robyn Lawley, Shareefa J, and Jada Sezer. It could be a coincidence, but I hope that the folks at Sports Illustrated saw the S4A photo, and jumped at the chance to work with such a unique, innovative and body-positive brand: A brand that has brought plus-size women some of the sexiest, most beautiful and high-quality swimsuits ever available on the market and that is now bringing us the #CurvesInBikinis campaign.

"I have always loved my curves and it feels good to show them off as part of the #CurvesInBikinis campaign for Swimsuitsforall," adds the confidently curvaceous beauty. "This campaign really makes the statement that women should feel comfortable flaunting their curves — especially when wearing a swimsuit — and shows that men think curves are sexy, too."

Whilst some people have criticized the necessity for the prototypically sexy dude in this advertisement, I sort of understand where Ashley is coming from. Because a more voluptuous figure isn't widely celebrated in our society, it becomes easy to fall into thinking that a fuller figure will equate to a lack of romantic interest. But that's just not the case. And whilst appealing to men should never necessarily be a woman's top priority, the reality is that we all — at some point or another — want to feel seen and desired.

According to Swimsuitsforall CEO and President Moshe Laniado, we're entering a kind of "Curvy Girl Era," or, at the very least, paving the road there. As of late, we've been seeing a lot of progressive moves within the fashion and modeling industries when it comes to size inclusivity. Just three weeks ago, size 22 plus-size model Tess Holliday (formerly known as Tess Munster) was signed to Milk Management. Lingerie headliner Victoria's Secret is being repeatedly petitioned to incorporate plus-sizes into their range. And celebrities like singer Mary Lambert are opening up more than ever before about the struggle to be a fuller-figured woman in today's society. "There is a lot of momentum around seeing curves as sexy," says Moshe. "We want to help fill that gap so more curvy women can feel sexy and confident when they wear a swimsuit."

What I personally love about Ashley's S4A ad is that the bikini she is wearing is low-rise. Even within the "fatkini" movement, plus-size women in low-rise bikinis just isn't something we see very often. Depending on what side of the fat acceptance movement you live on, for a fuller-figured woman to wear a low-rise bikini is either "brave" or "wrong." Now, I know: Ashley Graham is technically more in-betweeny than a more obviously plus-size woman. Some will argue she's not much larger than Sports Illustrated's usual models, and therefore her new ad isn't something to celebrate. But the reality is that Ashley is a plus-size model. To fault her for "not being big enough" is to be anti-body-positive. It belittles her career, and all the work she does for size inclusivity in fashion. And I don't know, but maybe seeing more "average"-bodied women like Graham will inspire women of all sizes to strip down this summer and go for the itty-bitty bikini if that's what they so choose.

With the decision to feature such a low-rise swimsuit, I was curious about S4A's thoughts on fatkinis in general, and whether or not the brand hopes to incorporate some more suits on that itty bitty side of the coverage spectrum. "Our customer loves our high-waisted bottoms, but she does not shy away from our low rise," Moshe told me. "In our bikini assortment, we worked hard to give her a large assortment of bottom heights to choose from. We are loving the low-rise bottoms on Ashley and we hope to add more low-rise bottoms in the future."

"Finally, the industry is recognizing what many of us have always known: Curves are sexy," adds Ashley — in full awareness of the beauty in the big. "I hope this sparks more momentum for women to flaunt their curves, whether it's at the pool or while on vacation or as part of a major ad campaign. The world is ready to see more curves in bikinis."

It'll take time (a lot of it) before the world truly embraces figures like Ashley Graham's without questions or concerns — let alone a woman more like Tess Munster. But in the meantime, we can enjoy this sultry and wonderful teaser of Ashley's campaign with S4A.

Yep. The world is definitely ready "to see more curves in bikinis." Let's just hope no more of her ads are banned from TV for being "too racy," whatever the hell that means.