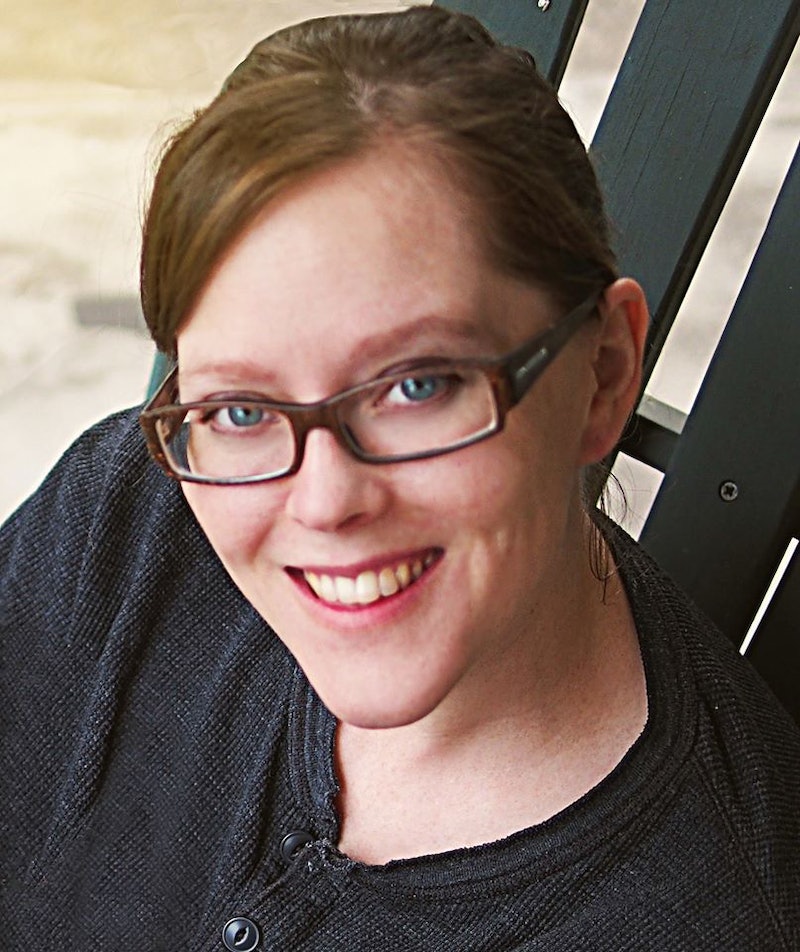 Children's book author Brie Spangler is set to make her YA debut with Beast: a retelling of you-know-which classic fairytale, but with a unique new spin. I've teamed up with Alfred A. Knopf for an exclusive look at the cover and a chapter excerpt, book and fairy tale nerds, so read on!

Spangler's newest tale centers on Dylan, a burly, hairy loner whose only friend seems like more of a user and abuser than a best buddy. After his school bans hats — his disguise of choice — Dylan falls off a roof and breaks his leg in what appears to be a suicide attempt. He wakes up enrolled in a self-harm prevention class, where he meets Jamie.

Jamie is gorgeous. She challenges him, fascinates him, and — best of all — she isn't afraid of him. But Jamie has a secret that Dylan missed out on hearing. She's trans. It shouldn't matter to anyone, least of all Dylan, and it shouldn't change his opinion of her, but Jamie worries that it might.

Beast is a departure from Spangler's previous books. Both Peg Leg Peke and The Grumpy Dump Truck are picture books. Even though Spangler's tackling a new and different audience with Beast, it reads like an offering from an old pro. Publisher's copy likens the novel to titles from YA titans Rainbow Rowell and David Levithan, and they aren't wrong. And just look at the stunning cover:

Check out an exclusive excerpt from Beast below.

Today didn’t start off as the worst day ever. When I ate a small breakfast of six pancakes, four pieces of toast, and quick fistful of bacon, I thought maybe Mom was onto something when she said, “This is your year, Dylan, I can feel it!” Because, I don’t know, perhaps after this epic crapstorm of foot-long growth spurts and shaving since the sixth grade, sophomore year would be my year. It’d be a nice change. I even saw a good-luck penny lying heads up on the sidewalk on my way to the bus stop. A sign from my dad he was thinking about me. But that false hope of One Good Year shattered when St. Lawrence had to go and ban hats and long hair on guys. The whole entire school turned around and gawked at me.

Every day my hair is the same. Part it down the middle, comb it down so covers as much of my face as possible, put the hat on. Mom hates my hair. It hangs in my face, she says. Hides my eyes. My hair is my thing.

Correction: was my thing.

Madison blurted out, “Oh my god, now we’re going to have to see the Beast’s face every day.” She really did say that. Right in the middle of the school assembly. I sat one row behind her. Of course JP laughed. When Fern Chapman rolled her eyes at Madison and told her to shut up, my chest bounced off the floor like a rubber ball.

Thank you, Fern Chapman. This is why I’m so stupid in love with you.

She’s so pretty, it’s hard to be in the same room as her. The air tightens.

“Take Madison back to your cave first, Beast.” JP elbowed me from his chair and waited for me to laugh. I gave in because, screw it, that’s what you do when the principal is standing on the stage announcing to the world that St. Lawrence Prep is hell-bent on exposing you for the genetic wasteland you are.

Sitting next to my best friend JP only proved my theorem. Not in some crazy quadratic reciprocity way. No, more like: one of JP’s freckles > my entire physical everything. Squared. If we’re going on looks, JP is the gleaming hero in shining armor mounted on an all-white horse, who unleashes his broadsword from its gilded hilt and slays me dead while the townsfolk cheer. Which is pretty much the truth. His motto is “Nunquam ad ianuamSimul adorator,” which if you plugged that into Google Translate, it’d humble-brag: “He is worshiped.” Watching how he gathers up girls like a butterfly collector kills me every time he pins one through the heart.

But in a weird way I love JP because he’s not afraid of me. Making friends was never easy. Mom was always like, “Talk to the other children. Show them your beautiful smile!” (Mom . . .) But when I tried, they ran the other way. Or even worse, pretended I wasn’t there. When I had thirty pounds on every other first grader in town, JP was the only kid who asked, “Wanna play?” Of course my answer was yes. And if he asked me to rough up the occasional somebody here and there, I did it because he wanted me to be his friend. It wasn’t too bad. Usually standing over the kid and staring down did the trick. Besides, hanging out with JP is a badge of honor at St. Lawrence. I’m not about to sacrifice my seat by his side at the lunch table.

He’s the best, except sometimes I hate him. Like right now. If it weren’t for JP, maybe I wouldn’t have gone onto the roof and maybe I’d still have hair. It was JP’s idea to go to the barbershop after school. He said he’d pay and I was like, awesome, because he’s stinking rich and I’m poor as hell. JP must know I’m really down, I thought as I sat in the chair. Nice thing for him to do. So I told the guy I wanted it cut like JP’s, just like JP’s. He tosses it to the side and it always looks perfect. Girls run their fingers through it whenever they get the chance. I want that. I’m telling the barber this and the dude goes and buzzes a strip right down the center of my head. What the hell? I jumped out of the chair, stupid plastic cape and all, and towered over the guy. He cowered, like they always do, and pointed at JP. Told me JP slipped him an extra twenty bucks to buzz it. And right on cue, JP starts laughing. I laughed too, but that’s different. I had to.

So now I have a buzzed skull. I don’t like it. Reminds me too much of chemo. I wonder what my dad thinks about my new haircut? He’d be the expert on this particular hairstyle. If he still does think, that is.

I tried to block out hating my new chemo head, but that only lasted until I got home, took my hat off, and saw my reflection in the hallway mirror. If anyone asks, yeah, the busted glass and dribbled bloody trail leading up to the roof was me. Big deal. I needed some fresh air. I picked up the long-lost football, took a deep breath, slipped, and we both came tumbling down. Perfect end to a perfect day.

If you can bear to wait for more, pick up Beast at your favorite bookstore on October 11.

Images: Courtesy of Alfred A. Knopf

More like this
16 Novels That Paint A Realistic Portrait Of Abortion
By K.W. Colyard
10 Must-Read New Books Out This Week
By K.W. Colyard
Lauren Rae Is Bringing Back The Sex And The City Vibes In Her New Memoir
By Shahed Ezaydi
Kimberly J. Brown & Daniel Kountz Looked Back On Their ‘Halloweentown’ Romance
By Stephanie Topacio Long
Get Even More From Bustle — Sign Up For The Newsletter