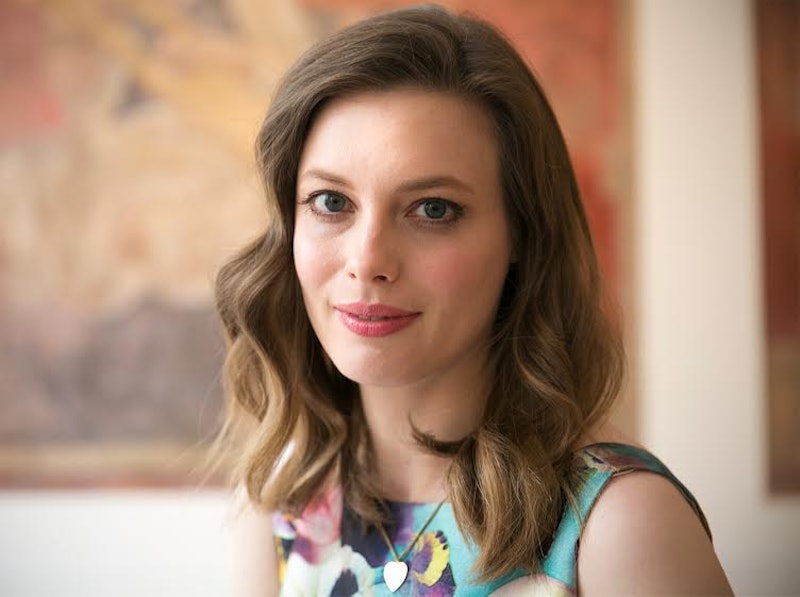 It's 2 p.m. in New York, and Gillian Jacobs and I are sitting at a table in the cafeteria of The Metropolitan Museum of Art, on the second stop of our "first date" tour of the city. We've already gone to Maysville in New York's NoMad neighborhood for late morning coffee, and then we toured the Met, and soon, we'll be standing on the museum's famous steps, looking out onto Fifth Avenue. It's a (platonic) and picturesque East Coast counterpart to the dating scenes of Los Angeles, where Jacobs' new show, Love , gets its title and spends much of its time — but if you listen only to what its lead actor is telling me about the series, the romance and idealism of today's adventures couldn't seem farther away from the reality of Love.

In other words, all in a day's work on a Judd Apatow-created series, even if it's relatively new territory for Jacobs. An actor best known for playing the vain, pretentious Britta on Community and the intimidatingly perfect Mimi-Rose on Girls, Jacobs has had plenty of supporting parts and indie movie roles over the years, but never her own TV show; Love, a 10-episode dramedy premiering Feb. 19, is her first real foray into leading actor territory. And she's the first one to tell you how terrifying that jump is.

"I’m trying not to always let on how nervous I am, to appear more confident than I actually feel," she says. "Because I feel like at earlier points in my life, I would’ve just gone, 'too hard, too scary, people are gonna realize I’m a fraud.'"

Jacobs certainly wouldn't have been alone in feeling that way; Imposter Syndrome is far too common, especially for women. But she's managed to find a way out — instead of seeing fear as a deterrent, Jacobs says, that she's now "at a point that I kind of want to scare myself."

Love, a sure-to-be-hit series that's already been picked up for two seasons, is just the challenge. About Mickey (Jacobs), a flighty, hard-partying woman who unexpectedly begins a relationship with awkward "nice guy" Gus (Paul Rust, who created the show alongside his wife, Lesley Arfin, and Apatow), the series is something of an endurance test: 10 episodes examining the intricacies of a friendship-turned-romance, filled with enough cringe-heavy moments (see: cat and vibrator, above) to make even the bravest viewer reach for the pause button. Both Mickey and Gus engage in plenty of questionable behavior, but it's Jacobs' character who truly tests the limits; she drinks too much, makes scenes in public, is the type of person who "forgets" her wallet and disappears at parties. Basically, she's a bit of the mess, albeit one who's trying, if not very successfully, to improve.

For Jacobs, who's all too familiar with playing "cool girls" who are anything but, Mickey's hypocrisies are more endearing than irritating. Speaking about her character, Jacobs takes on a protective, almost maternal tone; discussing the chance to play someone so flawed, she laughs as she says that "as an actor, I’m glad. But if she were my friend, I’d be pulling my hair out." Mickey makes bad choice after bad choice, but Jacobs has no doubt that eventually, she'll find her way.

"I think Britta and Mickey and myself, it’s like this constant journey to be a better version of yourself," she says. "And that doesn’t mean you’re always gonna do it right. You’re still gonna make a lot of mistakes along the way. But I feel that desire to do better."

Jacobs relates Mickey back to herself frequently throughout our interview; although she insists that she's always cast in roles "incredibly different from who I am," she openly mentions her own life in comparison to Mickey's several times. Talking about Mickey's immaturity, Jacobs recalls how she herself once "was the friend that my friends worried about... their lives and careers all seemed to be moving forward, and I felt kind of stuck." Another time, she mentions how she empathizes with Mickey's "frustrating" decisions due to the fact that "10, 15 years ago, I was in a place in my life where I was making not as extreme, but similar choices." It's not that the actor is a "cool girl" herself; she's far too honest and good-natured to put on such a facade. But she understands how the desire to do more, to be better, can be compounded by one's own insecurities and the fear of making a change.

Jacobs readily admits that she's constantly working on self-improvement — she recently wrote an essay for Lena Dunham's Lenny newsletter about self-confidence that she says had a "revelatory" effect on how she views herself — but her characters are better off staying the messed-up people they are, for more than just viewers' enjoyment. The flawed feminism and all-too-relatable faults of Britta and Mimi-Rose and Mickey have hit nerves and started conversations about issues that matter: the limits of empathy, the value of self-worth, the autonomy a woman has over her actions and body.

"I don’t know what it is people see in me that they feel like I can handle this, but I'm flattered as an actress," Jacobs says. "But you just never really know what’s gonna resonate with people... hopefully, people love to hate you."

It's interesting to hear that sentiment coming from Jacobs, whose Lenny essay and anecdotes shared during our talk reference what she jokingly calls a need for "more of an eff-you attitude" when it comes to being liked. But over the last several years, she's begun to test herself, picking projects that challenge and "intimidate" her — or, as she quotes, "in the words of Shonda Rhimes, saying 'yes.'" She took on Love while she was "trying not to panic" at Community 's end; she wrote the essay for Lenny, despite being "scared" when Dunham first asked her to do it; and, biggest of all, she directed a documentary, a short film on the legendary computer scientist Grace Hopper that debuted in January without possessing an ounce of directing experience. The way Jacobs talks about her doc, Queen of Code, and the state of women in technology, it's hard to imagine anyone else having directed the film, but she reveals she had to give herself "a pep talk" on the first day of shooting, constantly reminding herself, "you can do it, you can do it, you can do it."

Her fear back then is understandable — it was her directorial debut, on the first-ever film about the groundbreaking Hopper — but letting it control her choices would've meant backing away from an "incredible" opportunity. Says Jacobs, "Even though I have the voice in my head that tells me I can’t do it, I’m just gonna try... I keep wanting to try and use different parts of my brain, challenge myself in different ways, and feel like I’m taking on new roles in my own life."

She pauses, then laughs. "That’s so cliche."

Perhaps it is, but it's clearly working. Love is getting strong reviews from critics, Jacobs' IMDB is filled with intriguing projects in the works, and the well-received Queen of Code has opened her up to the possibility of devoting more of her time to behind-the-scenes work. Noting the "real hunger out there" for more female-led documentaries, Jacobs says that while her career focus "really depends on the day of the week," she's become inspired to place more energy in her non-acting ventures. She's also considering mentoring; during a recent trip to the White House for an event promoting women in technology, she recalls her thrill over seeing so many young girls in attendance. Says Jacobs, "I was like, 'email me, whatever! I don’t know anything about computers, but if you feel like if you need anything, I’m happy to help.'"

Earlier in our conversation, the actor described Mickey as "a person who’s come to a point in her life where she wants more" — but it seems the same can be said for Jacobs, an actor for whom finding success seems to be just the beginning.

More like this
Who Is Allison Williams Dating After Her Divorce? She’s Engaged With A Child
By Jake Viswanath
Erika Jayne's Estranged Husband Tom Girardi Has Been Indicted On Fraud Charges
By Jake Viswanath
Keyla Monterroso Mejia Is Finally The Star Of The Show
By Gabrielle Bondi
This 'One Tree Hill' Wardrobe Error Is Going Viral On TikTok
By Brad Witter
Get Even More From Bustle — Sign Up For The Newsletter
From hair trends to relationship advice, our daily newsletter has everything you need to sound like a person who’s on TikTok, even if you aren’t.