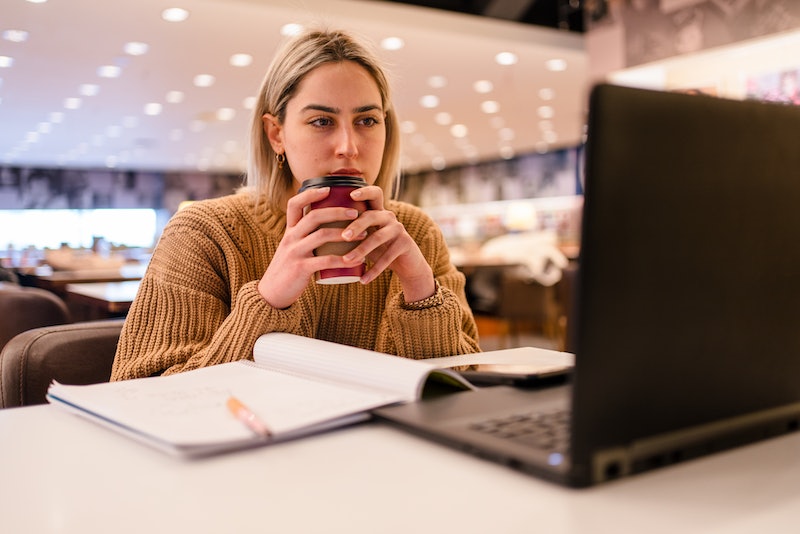 If you're a writer, then you already know that writing involves a great deal of lying. Lying on the page, lying to yourself, lying to your loved ones, lying face down on the floor until you can think of a way to end your third chapter — these are all invaluable parts of the writing process. And if you've chosen to be a writer, you've signed yourself up for a lifetime of lies.

I mean, look, everybody lies on occasion. And lying can be a very valuable skill for a writer, like when you're coming up with characters, or when you have to tell that girl in your workshop group that her manuscript is "thought provoking." Lying, like drinking coffee and uncontrollable weeping, is just another tool in the aspiring author's toolbox. But once the lying starts, it can be hard to turn it off.

Whether you're a published author, or a part-time fan-fiction creator, or a recent Creative Writing grad (with a heart of stone after four solid years of vicious workshop critique), you've definitely told a lie or two. And that's OK. That's what it takes to go from an idea to a first draft to a bestseller (or possibly an unfinished novel that you will never allow anyone to read).

So let's all admit that we've all told at least one of the following lies:

See, this is why you should never tell people what you're writing. Because if you EVER dare to mention to a friend or a parent or a boyfriend that you're writing something, they will inevitably ask you how it's going. Because they "care" about your "work." And then you are going to have to look them in the eye and say, "Oh, that book that I started writing three years ago? I'm almost finished!" Which is not totally a lie, because halfway finished is basically almost finished, and you're halfway to halfway finished, so... you're kind of almost finished, right?

The hardest part about writing is actually sitting down and putting words on a page. This is partly because writing is impossible and all writers hate to do it, and partly because there is never any time. So we write "work on screenplay!" at the top of our to-do lists everyday and hope that maybe, maybe we will have time to actually write between jobs, social obligations, eating, second jobs, and taking the occasional shower.

....and then when you DO have five minutes of free time, you tell yourself that you're going to ACTUALLY write TOMORROW. But for now... well, you can't write while you're tired, can you? Of course not. You'd better stare blankly at Facebook and then watch 30 Rock reruns so that you'll be well-rested for tomorrow, when you will actually, totally start writing.

The beautiful thing about writing is that it makes for a great excuse: "Sorry, I can't come see your boyfriend's ska band — I have to write!" That way, everyone thinks you're artsy and dedicated to your craft! Little do they know you're sitting at home staring at the wall, waiting for the ideas to come! Telling people that you have to write, and that you're trying to find time to write, is also a wonderful way to avoid doing any actual writing for as long as possible.

But sometimes the star align (or you have a stay-at-home writing job), and you find yourself at home all day with nothing to do but write! Hooray! This means that you can tell yourself a whole new pack of lies! Like, "I'm going to put on pants today," or "I'm going to go outside before the sun sets," or "There's no way that I'll still be in my pajamas at 5 p.m.!"

Now this lie is just being unfair to yourself. I mean, look, we all know that it's hard to make money in the arts. But some of us already graduated with a degree in Creative Writing and we're hungry, so we have to find a way to make money through the arts somehow! Well, you shouldn't listen to the haters: there are a lot of jobs out there for writers. Even if you don't start churning out bestsellers right away, you can find someone who wants to read your words (and maybe even pay you for them).

7. I Just Need to Wait for Inspiration

Say it with me now: "You can't wait for inspiration. You have to go after it with a club." (Jack London). We tell ourselves that we just have to wait for inspiration to strike... but unfortunately, great plots and character backstories don't always drop fully formed from the sky. It takes a lot of pacing, writing, coffee, and re-writing to come up with an "inspired" piece of writing.

8. Thinking About Writing Is Basically the Same as Writing

Well, maybe you don't have time to actually write today, but you're going to think about your writing on the train. And at your friend's art opening, you're going to spend your mental energy thinking about what your next chapter is going to look like. So that you'll have it all in your head before you write it down. Because thinking about writing is basically the same as writing, right? Right??

9. I’m Not Jealous of That Other Person's Book Deal

Jealous? You? You're definitely not jealous of that friend of a friend's book deal. Even though you've read some of her stuff, and it's terrible. And her Instagram is tacky. And she's younger than you. But you're not jealous! You don't get jealous. You're above it all. You're absolutely not going to buy her book to hate read it and then feel even worse when you kind of like it. Nope.

I'm not saying that you're not the best. Maybe you are! But we've all had those glorious moments when our writing felt so on point that we scoffed at the idea of needing an editor or a writing MFA or a second draft. Obviously, this first draft is going to be the next To Kill a Mockingbird, so the world might as well hand over the Pulitzer right now. Who needs rewrites?

And then, in the cold gray light of morning, you read over your first draft and realize that it stinks. Because we've all had moments when our writing felt garbage. If someone asks you what you're writing, for instance, you might say, "Ugh, it's this stupid short story and it's terrible, and no one will ever read it, nor should they." But thinking that you're the WORST is a completely unfair lie. You're not the worst! Your writing is probably much better than you realize. And even if it's not... hey, that's what rewrites are for. Writing, like any skill, takes a lot of practice (and a tightly woven web of lies) to perfect.

More like this
16 Novels That Paint A Realistic Portrait Of Abortion
By K.W. Colyard
The Most Anticipated Books Of July 2022
By K.W. Colyard
Lauren Rae Is Bringing Back The Sex And The City Vibes In Her New Memoir
By Shahed Ezaydi
Annie Lord’s Memoir Will Make You Believe In Love Again
By Shahed Ezaydi
Get Even More From Bustle — Sign Up For The Newsletter