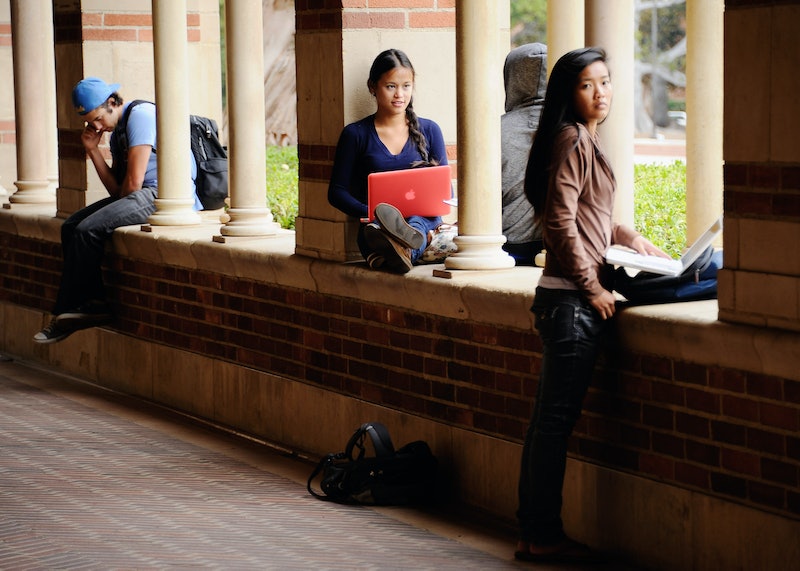 I have a confession to make. Sometimes when I'm asked what I majored in during college, I occasionally fib and say English or English literature instead of what's written on my diploma: creative writing. It's not that I'm ashamed or embarrassed by my degree (I worked really hard for it!), but sometimes it's easier to avoid the looks of condolence and skip ahead to a subject most people can understand. (Besides, who wants to constantly explain how they are or aren't using their creative writing degree in the real world? Nobody, that's who.)

Creative writing majors are definitely more misunderstood than the typical English major, but creative writing classes can be truly amazing. They force you to really sit down and write, push you to dish out and take constructive criticism, and examine all the elements you think make a great story or poem. At some point, you'll also have to read your work aloud at a public reading, and you'll definitely have to pull some all-night writing sessions. Being a creative writing major is not for the weak.

What I'm getting at is that there's no shame in majoring in creative writing. In fact, it's pretty awesome, because your homework is making up stories and poems — the thing you've probably been doing for fun since you were a kid. Here are a few more things you can expect once you learn to stop worrying and embrace being a creative writing major.

You Have the Best Poker Face of Anyone You Know

While everyone else in class is picking apart the short story you spent days writing and rewriting, you calmly take notes and refuse to buckle under the pressure to defend your work. Harsh criticism just bounces off of you like bullets off of Wonder Woman's cuffs.

The People In the Printing Queue Hate You

You totally get it. You'd hate you, too. But class starts in 15 minutes, and you need to bring 13 copies of a 20-page short story you finished writing late last night. That's only like, 260 pages. The person behind you just has to deal.

At first, the idea of sitting in a small room, critiquing other people's work and having your own picked apart seemed like torture. But now whenever you have a conflict with someone, you just want to sit them down and methodically talk about everything they're doing wrong and how they can fix it.

At this point, you're totally putting the cart before the horse, but you can't help it. One day you imagine yourself applying to grad school, the next looking for an entry-level job at a publishing company. The worst part is that whatever you decide, you know a small part of you will regret not taking the other path.

There's a special moment when you see a fellow creative writing major at the on-campus coffee shop. She looks up from her laptop (where she's been working on her villanelle) and you give each other the nod that says: you get me. The struggle is real.

There's Always That One Person in Class

Someone being better at writing than you is one thing. You can respect that. But someone who can't write well or critique someone else's work in a way that's at all helpful (but who thinks they can) is another monster entirely and you do not have time for this unwashed riffraff.

You feel really guilty about this one, because you know you're contributing to the stereotype of lazy creative writing major, but hey, you're not going to complain. (Especially after your professor compliments you on your use of metaphor in front of the entire class.)

When Snooty Science People Pick a Fight With You, It's On

Creative writing majors already have to face well-meaning family members and friends who want to know: "What exactly do you plan to do with your degree?" So when random hard-science majors come out of the woodwork to trash talk the humanities, things can get intense. (They're just upset that while they're breeding fruit flies, you're writing the opening chapter of your novel.)

Free things are the siren song for college students, especially free food and booze. Lucky for you both those things are in ample supply at readings. You're willing to suffer through a lot of poems about softly falling snow if it means you get to knock back a few plastic cups of cheap Merlot.

You Know That At the End of the Day, You're Following Your Dream

It's tough to listen to your heart and pick an artsy major instead of one that will definitely get you an actual, well-paying job right out of school, but you know life isn't about playing it safe. You're willing to bet everything on how much you love to tell a good story and you wouldn't trade being a creative writing major for anything.

More like this
10 Must-Read New Books Out This Week
By K.W. Colyard
Josh Peck Shows Love To Jennette McCurdy After Her Shocking 'iCarly' Revelations
By Radhika Menon
Emma Mackey *Is* Emily Brontë In The First Trailer Of The Biopic
By L'Oréal Blackett and Sam Ramsden
We’ve All Had Bad Sex. Nona Willis Aronowitz Is Talking About It.
By Sophia Benoit
Get Even More From Bustle — Sign Up For The Newsletter