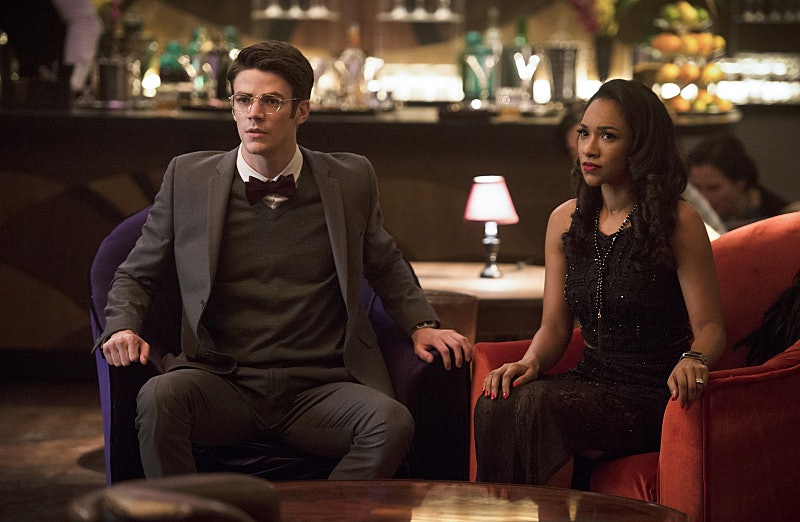 If one thing is for sure, it's that Earth-2 knows how to produce a power couple... or two. I mean, Barry and Iris? Caitlin and Ronnie? Well, I guess to be technical, Killer Frost and Deathstorm. Still, no matter good or bad, these alter ego duos where were it was at in this week's episode, because The Flash writers weren't holding anything back. Not only were they together, but Barry and Iris were married on Earth-2. Married. As in, took vows. As in, live together. As in, Iris throwing Earth-1 Barry disguised as Earth-2 Barry up against a wall and making out with him at her workplace. As in Barry's Earth-2 mom urging them to have a kid together. Yeah, about that...

Earth-2 Nora Allen is alive and Barry, posing as his Earth-2 doppelganger, gets a chance to speak to her, even though it's only on the phone. While that sentimental moment is special and revealing when it comes to Barry and Iris' relationship, it's perhaps even more intriguing when we meet Earth-2 Joe West, who goes by Joseph and also happens to hate Barry. The thing is, instead of the animosity driving a rift between Iris and Barry who are usually united by Joe on Earth-1, here it seems to have strengthened them.

Through a low-key tirade at Jitterbugs (even coffee shops get Earth-2 doppelgangers!), Joseph reveals that Iris gave up her journalism dream to become a cop in order to pay for Barry's tuition to get his CSI degree. Upon hearing this, there's a look of both guilt and realization on Barry's face. The guilt is for stifling the career Iris so loves on Earth-1, but the realization is that on Earth-2, the WestAllen love runs deep. Real deep. On Earth-2, Iris loves him back.

Of course, this visit to Earth-2 is not just a case of Barry living out some suppressed dreams by playing house with Iris' double. Killer Frost and Deathstorm gravely injure Joseph, who ends up dying in the hospital — but not before telling Barry to take care of Iris. And, though this is merely an Earth-2 occurrence, it looks like Barry takes that plea to heart, he even says as much. When Harrison Wells tells Barry to separate Earth-2 from his reality, he says that no matter what universe they're from, Iris and the others are still family to him. The real question is, how will things go back to normal for a seemingly smitten Barry if he ever gets the chance to return to Earth-1, where he and Iris are very much not together?