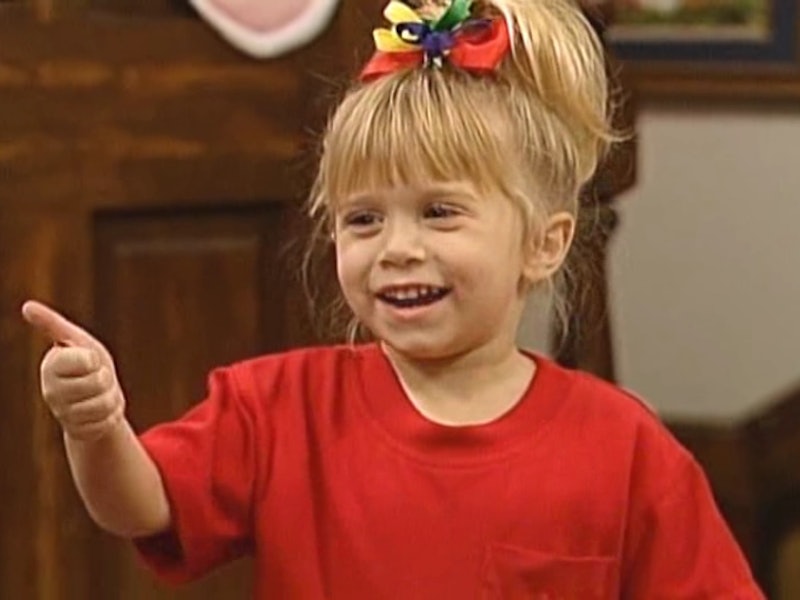 As excited as every '90s kid and Full House fan was to hear that the series would be returning to Netflix with a spinoff featuring DJ, Steph, and Kimmy titled Fuller House, it was still a bit of a bummer to find out that Mary-Kate Olsen and/or Ashley Olsen would not be making a cameo as Michelle Tanner in the series. Don't get me wrong, I'm overjoyed at the prospect of a reunion with the rest of the Tanner family (plus Kimmy) — but seeing Michelle again, all grown up, would be great too. Like, where is Michelle if not on Fuller House ? What is she doing with her life? Luckily, it seems that despite her physical absence, Michelle's presence will still be felt on Fuller House — in the first extended trailer for Fuller House released Tuesday, Michelle's whereabouts were revealed, and it sounds like she's doing super well for herself.

It's revealed in a cute scene right at the end of the trailer: DJ, Steph, and Kimmy are huddled around a phone, while Steph suggests they call Michelle. DJ protests that "it's five in the morning in New York," but Steph goes ahead anyway — only to get Michelle's voicemail. Adorably, the trio yells "you got it, dude!" into the phone, referencing Michelle's adorable catchphrase from the original series.

It's basically the ideal way to handle the absence of such an iconic character. Michelle is clearly off doing her own thing and having an epic life in NYC (is she, perhaps, a fashion designer alongside another girl who looks strangely similar to her? Just a suggestion), and the clip indicates that she's still close enough with her sisters that a 5 a.m. phone call is totally the norm. As a Full House fan, I couldn't have asked for any more.