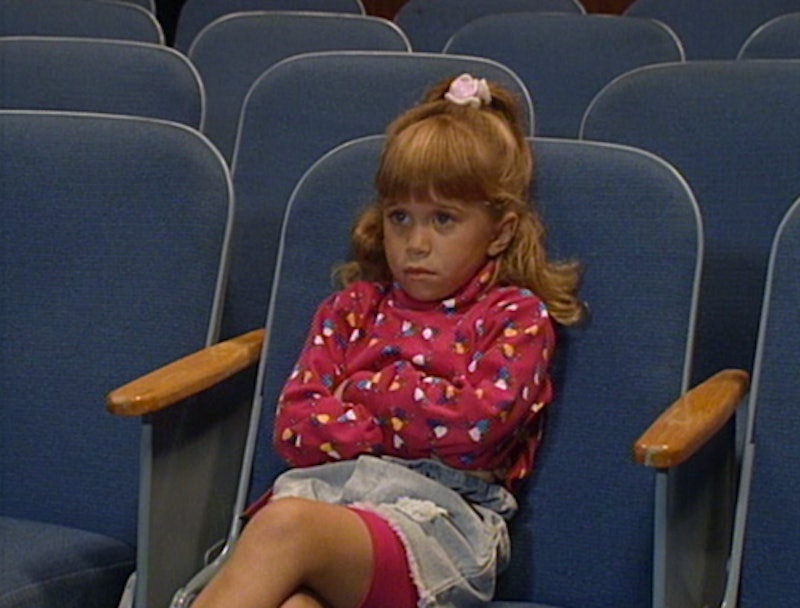 Whatever happened to predictability? The milkman, the paperboy, evening TV... OK, sorry! Excuse the '90s nostalgia, but like any fellow Full House fan, I couldn't be more excited about the upcoming Netflix reboot. When news broke that Mary-Kate Olsen reportedly married Olivier Sarkozy over the weekend, it really hit me: The Olsen twins are all grown up. Along with that mind-blowing realization, I found out some disappointing news about the famous sisters. In a recent interview with Huffington Post, Lori Loughlin (aka Aunt Becky) confirmed the Olsen twins won't appear in Fuller House . The actress said, "No, I don’t think they’re going to make a cameo. They didn’t this season."

While it's been long-suspected that they weren't part of the show, I can't be the only one who had been clinging to any bit of hope that Michelle Tanner would return. After all, Netflix's Chief Content Officer Ted Sarandos previously said the Olsen twins were "teetering" on joining the show. Unfortunately, I guess they decided against it. Fans probably should've taken Uncle Jesse's word for it. Back in May, John Stamos tweeted, "I understand they're in a different place and I wish them the best. I promise you will not be dissapointed [sic] with our reunion and spin off!!"

It's unfortunate, since Michelle Tanner was easily the show's best character. (Before you utter a "How rude," remember that every fan is entitled to an opinion.) In the spirit of Full House, here's how Michelle Tanner would react to this disappointing news.

No, she does not "got it, dude." This situation calls for a "no way, Jose!" because it just simply cannot be true.

This can't be true, can it? Michelle would let out her trademark gasp.

Michelle would pick up the phone and share the heartbreaking news with everyone she knows.

A big bowl of spaghetti, coming right up!

It's OK to cry. Michelle would be sadder than that time Uncle Jesse contemplated moving out.

Forget Politeness Week. This situation calls for some angry words.

Because you can never have too many chips.

8. Try & Save Up Money To Bribe The Olsens

She'd scour her piggy bank and see if she saved up enough to pay the Olsens to make an appearance.

9. Channel Her Feelings Into Sports

This technique worked for Regina George in Mean Girls. Instead of being mad at the Olsens, little Michelle will take out her rage on a golf ball.

10. Comfort Herself With Dessert

Cookies, ice cream, you name it — Michelle will eat it. I think I'll follow her lead and go grab a bowl of ice cream myself.

11. Reflect On The Good Times

While the world could use more Michelle Tanner, I guess fans will have to be happy with the memories they've got. What better excuse to go back and rewatch all of the original Full House episodes?