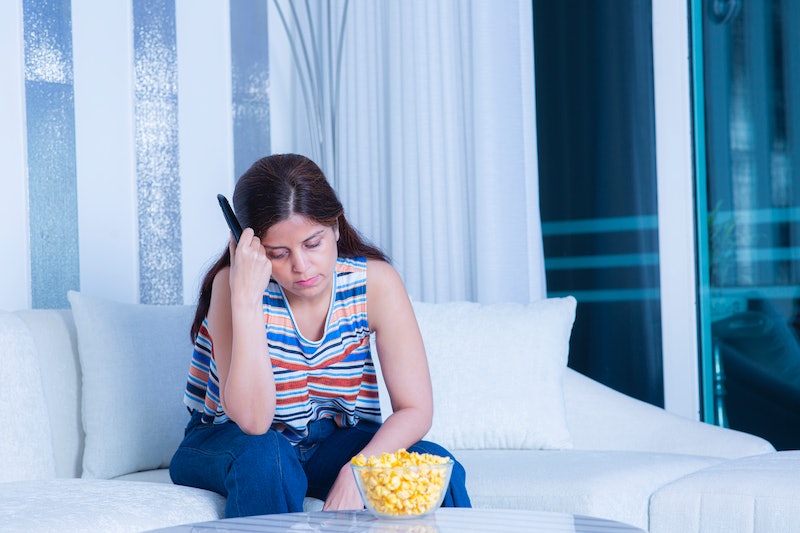 Almost all of us have had at least one sleepless night in our lives, whether it's from illness, a jetlag-inducing plane flight, anxiety about the next day, or just having a deep need to watch the entire box set of Friends. (No judgement.) But before you become cavalier about regularly pulling all-nighters, there are things you should know about sleep deprivation. Not sleeping has serious consequences for your body and brain — and even though they get worse as you lose more sleep, they definitely start to kick in after just one up-all-night experience.

There's a standard in science when discussing sleep deprivation: performance declines by 25 percent for every 24 hours you go without sleep. But that figure hides a lot of variation and some very interesting stuff happening in the brain and the body. We're gradually understanding that it's not just a matter of the entire brain feeling the weight of hours without sleep; a University of Wisconin-Madison study conducted on rats found that various parts of sleep-deprived mammal brains might actually just "go to sleep" on their own, even if the animal itself is acting as if it's fully awake. If that's what happens in humans, it means that regions of your sleep-deprived brain are simply checking out for stretches of time even while you're still up and about, which can lead to all kinds of havoc.

So next time you feel like it wouldn't be such a bad idea to dance until dawn and then go to work as if nothing has happened, remember: you're not going to have a good day afterward.

After 24 Hours: You May Have Trouble Focusing

There have been a lot of studies conducted examining the cognitive effects of being deprived of sleep for less than 48 hours — so many, in fact, that scientists have done what's called "meta-analysis" of them, bringing all the studies together and seeing what the full picture on sleep deprivation is. And it seems that even a day without sleep starts to mess with our minds pretty intensely.

The biggest thing that happens when you're sleepless for 24 hours (or more) is that your ability to focus and pay attention slips, according to a 2010 analysis of studies published in Psychology Bulletin. The scientists behind that report looked at 147 different cognitive tests performed on people who had gone between 24 and 48 hours without sleep. They found that the big thing to suffer was "simple vigilance", or your ability to pay attention to one kind of stimuli at a time (a person talking, for example, or a piece of music). Another study found that the impact of a night without sleep on your brain's ability to focus was the same as having a 0.10 percent blood alcohol content.

At this point in sleep deprivation, your working memory is still functioning reasonably well, as is your complex attention, which does stuff like putting things in numerical order or arranging lists of names. But your hand-eye coordination will worsen, and some complicated mental processes are already breaking down: according to a 2011 study, 24 hours of sleep deprivation make you less effective at making certain kinds of decisions. Simple ones become hard, though more complex ones are less affected, but there's a catch: If the complex stuff you're being asked to decide involves things you haven't encountered before, the need to revise old plans, or being forced to deal with big distractions, your performance will not be at its best. So it's best to get a good night's sleep before the big strategizing meeting at work.

The brain also finds it a lot more difficult to filter out relevant information from everything it picks up. A study from the Journal of Neuroscience found that, after one night without sleep, people were much less able to filter out irrelevant stimuli, leading to confusion from taking in too much information. And your body is less capable of reacting quickly: a study of college athletes found that after one night of sleep deprivation,they were still able to perform athletically, but their reaction times were pretty shoddy.

36 Hours: You May Struggle To Remember Things

It's clear that the longer you go without sleep, the worse the situation in your body and brain gets. One study showed that, while even a little bit of sleep deprivation has a negative effect on the cardiovascular system, after 39 hours without sleep, the pressure on the subjects' hearts had increased, with a higher heart rate and bigger variations in blood pressure.

At this point of sleep deprivation, your cognitive performance is deteriorating, too. You won't be able to recall faces properly, and your ability to remember words will be significantly impaired. One study found that things like suppressing inappropriate responses, making verbs out of nouns and using visual memory — all pretty complex skills — basically go completely haywire after 36 hours of sleep deprivation in young people.

48 Hours: You May Get Sick More Easily

After 48 hours without sleep, the body really starts to be under stress. The immune system in people deprived of two days of sleep is pretty drastically different from the body of someone who has gotten enough rest; levels of NK cells, or "natural killer" white blood cells, which are a key part of the body's immune response, fell dramatically in people deprived of sleep for 48 hours in one study (don't worry — they went back to normal after they were allowed to sleep again).

A study of healthy young dudes who had been deprived of sleep for 48 hours found high levels of nitrogen in their urine, which is a sign that your body is dealing with incredible levels of stress. That means your system is less capable of responding well to infections or recovering from illness.

And your reaction time is, by this point, seriously impaired. When scientists from Columbia University checked out cognitive impairment in subjects who hadn't slept in 48 hours, they found that their ability to react swiftly was thoroughly shot — which has serious implications for your ability to keep yourself out of danger.

The interesting thing about serious sleep deprivation is that it doesn't make you feel uniformly hopeless. Instead, it makes your psychological and motor responses incredibly unstable. A study of people deprived of sleep for three to four days found that, when it came tasks where they had to pay attention, their performance was as erratic as hell: their ability to focus fluctuated madly and tried hard to compensate, but couldn't maintain a constant for more than a few seconds. The scientists thought that, by this point, they weren't either fully awake or asleep.

After 72 hours of wakefulness, your motivation plummets, and you may start to have some weird experiences. You may see visual illusions or hallucinate, but you won't actually enter psychosis; that's generally thought by scientists to be a myth about sleep deprivation. One thing that will likely start to happen, though, is you will experience "microsleeps." These occur when the brain goes to sleep for a very brief time, usually a matter of seconds, and then "jerks" awake again. I shouldn't need to note that experiencing this is ridiculously dangerous, particularly if you're driving. For everybody's sake, if you're sleep-deprived, stay somewhere safe until you can get some Zs and don't try to do anything complex or life-changing; the longer you go without rest, the less capable you'll be of doing, well, anything.