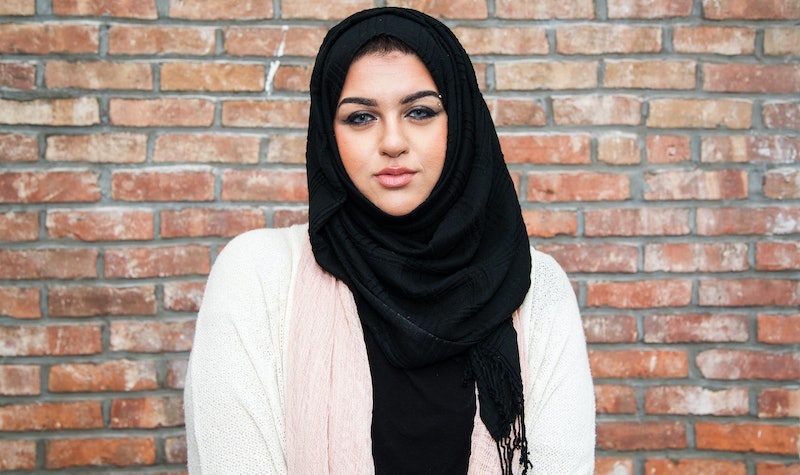 Take a look at American media — print magazines, online fashion blogs, television series — and count how many times you see a Muslim woman, let alone a veiled woman, as the focus of the camera. Not often. As a result, the general population can cling even more tightly to the stereotypes perpetuated about these women. A society that is unwilling to see beyond that which is familiar often perceives Muslim women as oppressed, extremely reserved, and more or less silent. With her revolutionary blog Muslimgirl.net, Amani Al-Khatahtbeh is out to disrupt that narrative and give the world a much needed wake-up call.

And it's this: Muslim women have a big voice. They can be feminists. They can be world leaders. And they, too, can rock fashion trends like no one's business. Most importantly they are us, and they need to be recognized as individuals who, like everyone else in this country, are a fusion of American and whatever else.

Like many millennials, Al-Khatahtbeh grew up in a post-9/11 society plagued by a penchant for misjudging Muslims as dangerous. "I was kind of indoctrinated into this really negative media culture surrounding Islam and Muslims," she says. "Going through that during my formative years, it really made me feel alienated from society and from my own identity, and I felt like my voice wasn’t being represented in the media."

The atrocity — which includes 9/11 and the wave of discrimination that followed — necessitated change, and Al-Khatahtbeh was the girl for the job. At 17 years old in 2009, she published MuslimGirl.net, a site where she and other young Muslim girls could safely express their opinions on politics, fashion trends, and Islam as both a religion and culture. Visiting the site, you'll witness everything from a "lookbook" article on the "Perfect Pink Pout for Valentine's Day, Bae Optional" to a more politically minded "A Muslim Woman's Breakdown of the State of the Union."

Now, according to Al-Khatahtbeh, the blog has grown from an after-class high school project to a full-blown blog with 40 writers and 10 editors from all around the world. Today, she's extended her mission to Forbes, where she records her journey toward developing a "a media powerhouse for Muslim women," and she also heads a column that describes what it's like to be a Muslim American entrepreneur in the digital space. "I think that it’s representing a shift in the people’s consciousness that there’s hope for us to connect with each other and understand each other better and it’s a really beautiful thing," she says.

Though the site is dedicated to giving Muslim women a voice, it also began to fulfill another purpose by becoming a safe space for non-Muslims to gain a more accurate understanding of what being Muslim American really means. After reading what contributors had to say, Al-Khatahtbeh realized that even she had some learning to do, suggesting that every individual — Muslim or not — should constantly be seeking out new avenues of knowledge and understanding. "Hearing stories in people’s own voices makes you realize that we’re all human beings and it makes you see things in a different light," she explains.

In fact, Al-Khatahtbeh, who lives in New Jersey, didn't visit the Middle East until she was 13, at which point she says she realized how skewed America's portrayal of the religion was. As she described her visit to the region, she focused on personal accounts from the individuals she came across, hitting an important point — that we, as a society, need to prioritize the individual before categorizing them as a member of any given group.

"Just being able to meet Muslims and talk to them and hear their own stories, it just makes you realize like wow, the way that they’re mischaracterized is so politicized and it just really opened my eyes to a different reality," Al-Khatahtbeh says. It's all about the individual story — the very thing that combats generalization — and that's what MuslimGirl.net sets out to reveal.

And her statement is correct down to the core. The mischaracterization of Islam is politicized to the point that Republicans attack President Obama for not invoking Islamism while speaking about terrorist attacks. Even worse, some political candidates are running on platforms that actually boast a discriminatory attitude towards Muslims and other minorities. For that reason, Al-Khatahtbeh's mission to provide an outlet where Muslim girls can speak for themselves has become increasingly relevant over the past several years. Her platform, which embraces controversial, yet respectful, discussion and encourages women to ask questions, acts as a weapon against that politicization.

Take, for example, the hijab. According to The New York Times' Suzanne Daley and Alissa J. Rubin, mainstream French politicians, among others, have been attempting to deny jobs and other services to veiled Muslim women. Although the country celebrates Christian holidays in public school, there is a zero tolerance policy for veils or head scarves in the classroom. For politicians, the head scarf — not much unlike a crucifix around someone's neck — has become a symbol of oppression and suspicion because unlike the crucifix necklace, it's a sign of Islam.

In response to the worldwide controversy, Al-Khatahtbeh has dedicated an entire section of her blog, titled "The Hijabi Chronicles," to the garment. To her, the head scarf is a personal decision that has proven liberating. "I feel like, in the media and in western culture specifically, we take covering up and modesty as a sign of oppression," she explains. "Policing how covered up a woman can be in public is just the same as policing how little she can wear in public — it’s one in the same."

You know, it's just important to be a good ally. There's nothing friendlier towards injustice than silence.

Al-Khatahtbeh continues to point out the isolating way in which women's liberation is manifested as an outward expression of sexuality. And that's where the feminist movement needs to become more inclusive of Muslim women as well as other minorities, she says. So far, thanks to women like Al-Khatahtbeh, it's making some major progress.

The MuslimGirl.net founder was featured in a Teen Vogue cover story that profiled her as one of the "new faces of feminism." According to MuslimGirl.net, the piece was the first full-feature print story in the publication's history to feature a veiled Muslim woman. "I think it’s really incredible that feminism is becoming more inclusive of women of color now," Al-Khatahtbeh says. "That lends itself to all of the really ambitious and new ways that women of color are trying to elevate their narratives and get their voices out there from all different races and all different religions."

In the face of anti-Islamic sentiment, Al-Khatahtbeh stresses that everyone is responsible for standing together and creating bridges of understanding. "You know, it’s just important to be a good ally," she says. "There’s nothing friendlier towards injustice than silence." For her, it's about disassembling the norm surrounding what it means to be a "proper" female Muslim and loudly recreating the narrative, so that it may better reflect that greater truth that applies to us all: We each have a story that deserves to be recognized, that deserves to be exempt from false preconceptions.

Through its intermingling of American pop culture, politics, world news, and Islam, among other talking points, Muslimgirl.net — and Al-Khatahtbeh — shows that the Muslim identity is multi-faceted, not singular. Muslim women have more than just one face.