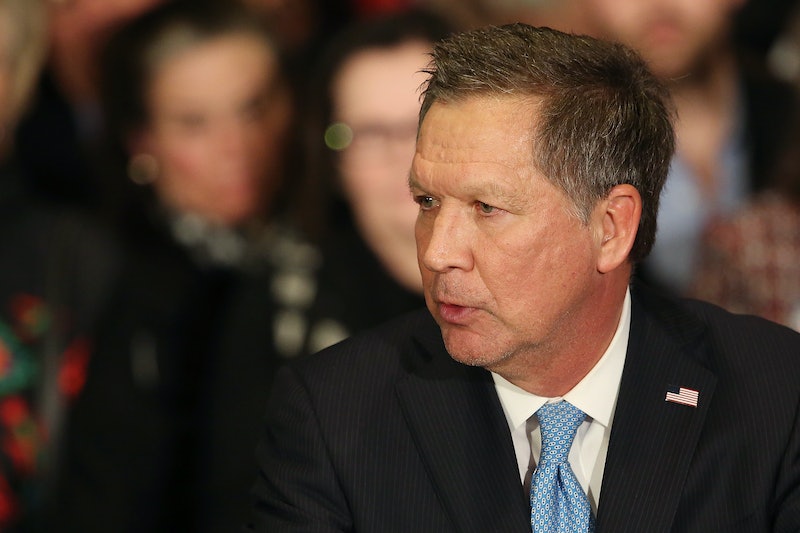 Ohio Governor John Kasich's presidential campaign got a major boost Tuesday when he placed second in the Republican New Hampshire primary, after Donald Trump. Though Kasich's win was fueled largely by moderate Republicans, the presidential hopeful is far from moderate when it comes to reproductive rights. In an attempt to highlight the candidate's super-conservative record and beliefs on women's health, the Dr. John Kasich, Gynotician Facebook page uses excellent Photoshop skills and satirical quotes to bash his anti-abortion agenda.

The term "gynotician" is the perfect way to describe politicians who ignore medical experts' opinions and try to control women's healthcare options based on their personal religious or moral beliefs. Considering the way many Republicans across the nation fight to limit access to abortion procedures and birth control (including Kasich), it can seem like they think of themselves as both politicians and gynecologists. The Facebook page's description sums up Kasich's approach to reproductive rights, saying: "John Kasich knows exactly what's best for your health— he'll even make your decisions for you!" The fake Dr. Kasich works at the Riffe Center in downtown Columbus, which is actually a theater complex right by the Ohio capitol. The phone number listed is for the governor's office.

Dr. Kasich offers helpful advice for ladies, like "squeezing an aspirin between your knees is the most effective form of birth control" and "wishing really hard not to be pregnant works 102 percent of the time," with the hashtag #facts. The aspirin tip can actually be attributed to Foster Friess, a very conservative businessman who told MSNBC's Andrea Mitchell in 2012: "The gals put it between their knees, and it wasn't that costly." Friess was obviously advocating for abstinence as the best form of birth control (though it's been proven ineffective time and time again). While Kasich didn't offer this advice IRL, he falls into the same group of conservative men who like to play doctor and control women's reproductive lives.

While the page is satirical, Kasich's anti-choice record isn't made up. As the governor of Ohio, he signed a 20-week abortion ban into law that didn't even include exemptions for rape or incest, and only a very narrow exemption for cases in which a mother's life is in danger. Kasich also signed Ohio's 2013 budget, which included a provision prohibiting state-funded rape crisis counselors from referring rape victims to abortion providers. If caught offering women abortion information, those clinics could lose their funding. When the Republican took office in 2011, Ohio had 16 abortion providers. Thanks to multiple provisions signed by Kasich, there are now only eight.

Dr. Kasich's Facebook page sheds light on how ridiculous Kasich and his counterparts' attempts to limit women's reproductive rights are, and how harmful a president with an anti-choice agenda would be for American women. Gynoticians like Kasich need to leave women's health to the real doctors.