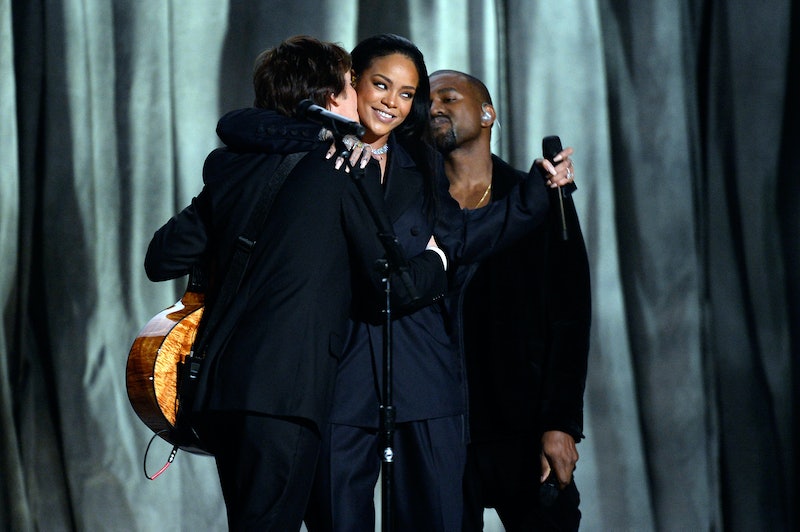 In light of the fact that Hollywood is still lacking in representation for people of different colors and sizes, let's take a moment to recognize some of the people getting it right: Namely, the folks at the Grammy Awards, who've always been pretty good at diversity. Yes, all of the inclusivity issues plaguing the entertainment industry can feel somewhat insurmountable at times — it's so difficult to even convince people there's a problem, let alone fix it — so it's important to remember that it is an achievable goal we should all be striving towards. And part of finding that sense of hope? Remembering that it's happened before. Last month's heavily-inclusive (and frankly, inspiring) Screen Actors Guild Awards were proof of it, and you know who else has honored diverse entertainers since their inception over fifty years ago? Why, the Grammy Awards of course.

While the Grammys are far from perfect, it's definitely worth noting that they've given diverse singers, songwriters, musicians, and producers some major time in the spotlight over the past 58 years. A look back at Grammy history reveals music icons spanning all the way from Ray Charles, to Diana Ross, to Prince, to Ricky Martin, to Beyonce. Rihanna and Jennifer Lopez have worn some of the most memorable Grammys red carpet ensembles over the years, stars like Aretha Franklin and Whitney Houston have taken the stage to much acclaim, and Michael Jackson and Beyonce respectively hold records for most awards won in a single night — suffice it to say, there's a lot worth celebrating, especially as we continue to strive for change within the entertainment industry.

So, with all that in mind? Let's take a look at 38 times the Grammy Awards got things right.

1. When John Legend & Common Performed Their Oscar-Winning Song in 2015

John Legend and Common performed "Glory," a song written for Selma — which just so happens to be nominated twice this year.

2. When RiRi Slayed in a Giambattista Valli Couture Cupcake in 2015

One of the best Grammy red carpet moments of all time. OF ALL TIME.

Robert Lopez and Kristen Anderson-Lopez won big with the chart-topping "Let It Go."

4. When Bruno Mars Won for "Best Pop Vocal Album" for Unorthodox Jukebox in 2015

Bruno Mars (who happens to be nominated twice for "Uptown Funk" this year) took home one of the night's major awards last year.

Also known as the year he wore The Hat.

7. When Pharrell & Daft Punk Performed "Get Lucky" With Stevie Wonder and Nile Rogers in 2014

8. When All Your Favorite Artists Paid Tribute to Bob Marley in 2013

Bruno Mars, Rihanna, Sting, and Damian and Ziggy Marley all got together to perform a tribute to Bob Marley, and it was pretty much everything you'd hoped and dreamed it would be.

9. When Jennifer Lopez & Pitbull Presented Together in 2013

These two have been working together for years, and they cut quite the elegant figure together when they presented at the 2013 Grammys.

10. When Brittany Howard of Alabama Shakes Performed in 2013

11. When Nicki Minaj Walked the Red Carpet as Little Red Riding Hood in 2012

In the words of Nicki herself: YAASSSS.

Yolanda Adams, Christina Aguilera, Jennifer Hudson, Martina McBride, and Florence Welch honored Aretha Franklin by performing some of her biggest hits, like "Respect," and "Sisters Are Doin' It For Themselves."

Still one of her best dresses ever, and that's saying a lot.

16. When The Black Eyed Peas Performed at the Grammys in 2010

They also picked up the award for "Best Pop Vocal Album" that year.

17. When Beyonce Made Grammys History By Winning Six Times in 2010

She set a new record for female artists by taking home six Grammys (after being nominated for a whopping 10!).

"Will you be my American boy?"

That red suit, though.

The "Don't Know Why" singer picked up a whopping five Grammys back in 2003.

27. When Jennifer Lopez Stunned in Versace in 2001

Some dresses make red carpet history, and this dress is one of them.

28. When Destiny's Child Performed Their First Grammys in 2001

Now, here's Beyonce near the beginning of her decades-long reign.

29. When Carlos Santana Swept the Grammys with a Record 8 Wins in 2000

Not pictured: His Leather Pants.

31. When Aretha Franklin Saved the Grammys in 1998

Luciano Pavarotti called in sick an hour into the performance — but luckily, Aretha Franklin was on hand to perform a heartrending rendition of "Nessun Dorma" in his stead.

32. When Whitney Houston Performed "I Will Always Love You" in 1994

Whitney Houston blew the roof off the Grammys with her stunning take on one of her most iconic songs back in 1994.

Penned by Michael Jackson and Lionel Richie, "We Are The World" was a groundbreaking song that raised funds for famine relief in Africa.

Grace Jones is fabulous for a lot of reasons, and this concoction of graphic eyeliner, statement hat, bone structure, and cape, is just one of them.

Remember that record Carlos Santana tied in 2000? Well, it was a record first set by Jackson in the early '80s.

For the record, she nabbed the award six years in a row.

After famously inventing The Twist back in the early '60s, Chubby picked up a Grammy for an album in 1962.