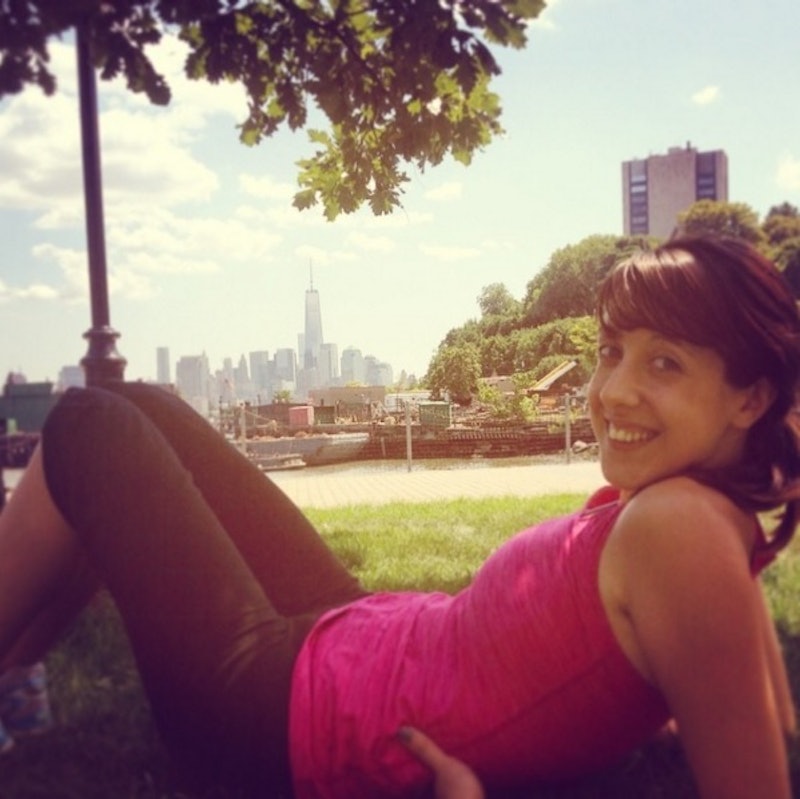 It is Tuesday night and today I have eaten: an energy bar, raw vegetables. I did not eat dinner last night. In fact, I have been skipping dinner for days. I meet my boyfriend at a bar. “Did you eat?” I ask him hopefully.

Later, at his apartment, I say, “I wish you had asked me if I wanted dinner.” I can’t tell him I’m hungry because I’ve been skipping meals. I am furious with myself because he’s the one (society tells me) who’s supposed to be eating all the time and I’m supposed to be the one who’s "not really hungry." I am angry because I am not good at this not-eating-thing like I used to be.

He points out that he told me I could eat, and I snap, “Well you weren’t eating.”

I do not like to admit that I am hungry. It feels weak to me, still. I fail to mention that I had been counting on him, this night — a night in which I am concerned about the fact that I have been skipping meals when I am supposedly "recovered" from my eating disorder — to encourage me to eat.

We go to sleep. My stomach grumbles in hunger, cramps in emptiness. I lay still, place two hands to it in satisfaction, and try not to feel too happy about that.

“Today I will like myself,” I chant pathetically in the mirror each morning before work. By noon, I will have heard at least three colleagues talk about their diet, their exercise routine, how they won’t eat the office chocolates, how they should get a salad today, how they have been going to the gym every night, so really maybe it’s OK to eat this chocolate, to not have the salad.

That recent night with my boyfriend is about as bad as it gets for me, now. In the throes of my eating disorder 10 years ago I was limiting myself to an 100-calorie-a-day diet. Simple tasks, like walking from the front door to my bedroom after school, exhausted me. I had to take breaks from climbing up the stairs of my childhood home. I remember those days by what I ate, how much I ate, who I ate with.

I used to read Marya Hornbacher’s memoir of anorexia and bulimia, Wasted, compulsively. I carried it around in my school bag, fingered the pages under my desk in classrooms. Eventually, sometime in college, I saw the book for what it was — not a how-to-be-disordered guide, but a how-to-get-better guide. “You are all that you have,” she writes, in the closing chapters. “So you must be enough. There is no other way.”

Being away from home during college hadn't been good for me. I starved and binged, unsupervised. I couldn't make friends, wasn't dating — I hated myself too much to try. But Hornbacher's words stuck with me. I began to realize that hating myself was so easy, so obvious. I finally connected the disorder to my unhappiness and loneliness. I transferred schools, and decided I wanted to work on liking myself.

I studied abroad in Italy and fell into a group of girls who were adamant about eating pasta and gelato every day. We off-set the carbs and sugar by walking miles through Florence. I didn't have a scale abroad, so I couldn't be sure, but I didn't feel like I was gaining weight. No one else seemed very concerned, anyway. Looking back at photos, I can see that I was the heaviest I had ever been since the eating disorder — and the happiest. For one of the first times in my young adult life, I was healthy.

When I came home, I intensely feared a relapse. I dragged myself through recovery, read inspirational quotes and blogs and books. I chanted daily affirmations to myself every morning. I made conscious decisions to eat; if not for me, then for my family, for my friends. It remains one of the hardest things I have ever done. But I didn't consider myself "recovered".

Hornbacher argues that an eating disorder is not something you just get over; “It is something that will haunt you for the rest of your life,” she writes. I had, for the longest time, post-recovery, believed this to be true so much so that it became a self-fulfilling prophecy, an excuse to never be fully well. In a world that is so obsessed with diet and exercise, how could anyone ever really fully recover?

“Today I will like myself,” I chant pathetically in the mirror each morning before work. By noon, I will have heard at least three colleagues talk about their diet, their exercise routine, how they won’t eat the office chocolates, how they should get a salad today, how they have been going to the gym every night, so maybe really it’s OK to eat this chocolate, to not have the salad. But they won’t eat the chocolate anyway and they will get the salad, so today they "did good". I walk back to my desk, where I have emergency chocolate stashed. I try not to cry.

Trying to like myself enough to eat has been nearly as isolating as the years I spent hating myself enough to not eat. In many ways, it has involved separating myself from a certain part of society. I had to throw out my Fitbit. Pre-loaded health apps that count your steps are my nemesis. They're far too triggering; I am too prone to obsessive behavior to use them as intended. I can’t look at nutrition labels; can’t discuss calories, fat, or sugar. I don't own a scale. I tell the doctor not to tell me my weight. I have had to distance myself from people who are unhealthy or fanatical about food or exercise.

I was once at a dinner party with some girlfriends when, after a constant stream of body hatred chatter, I near-shouted: “You’re all beautiful! And,” — I added, somewhat hysterically— “it’s OK not to exercise every day!” I have never heard one person in my life tell me that they love their body. I look at these beautiful, smart women I admire and I try not to think, “If they don’t even like themselves, what can that possibly say about me?” I stopped going to their dinners because I was concerned their conversations might cause me to relapse.

I try to counter all the body-negativity by reading influential women writing smart things about our collective body obsession. I work in book publishing and once worked on a novel about a 300-pound female protagonist who fell into a guerrilla group of feminists who taught her how to love her body. Yet I would consume this sort of empowering, body-positivity and hypocritically decide not to eat dinner. And then Hornbacher’s words — it "will haunt you for the rest of your life" — come creeping back.

It’s a rather terrifying truth that the only person truly stopping myself from starving is me.

I found an interview with Hornbacher recently that she did about 15 years post-publication of Wasted. She amends her recovery statement: “At that time, […], the running line in therapeutic circles was the patronizing notion that you’ll always struggle with your illness. To me, that’s like consigning someone to hell. I don’t buy it. I know so many women and men who’ve recovered. They’ve worked their asses off.”

Maybe eating disorder recovery is like any serious, life-threatening addiction. You don’t just wake up one day and stop having it; the withdrawal would be too much to bear. I'm lucky in that I escaped from the depths of my disorder mostly unscathed. I was never hospitalized and came away with virtually zero threats to my health but for the occasional fainting spell and a hyponatraemia diagnosis, solved by a high-sodium diet (to this day, my body cannot regulate salt from the years I spent starving it). I pulled myself out before I was too far in.

Maybe I will, on occasion, continue to make the easy choice to not eat — set off by some trigger or other — or maybe that need will go away eventually, too. Maybe I can only acknowledge it as a part of the recovery process. I may never be normal about my food, because my daily affirmations have to include, “I will eat three square meals today. If I am hungry, I will say so. If there is chocolate in the office, I can have it without beating myself up for the whole day,” where other people just eat when they’re hungry.

It’s a rather terrifying truth that the only person truly stopping myself from starving is me. It feels awfully feeble, sometimes. But, in spite of my occasional slips, I do believe that I will be fully recovered, one day. Because in between the panic over dinner with my boyfriend and trying not to cry over office chocolate, are the happy times. No more cold, lonely, shivering nights, no more trolling around websites for "thinspiration," no more self-hate that is so severe, so acute, that I will myself to disappear into nothing. These days, I like myself enough.

Last night I was at a family party where I ate chips and dip, a slice of pizza, and even a brownie for dessert. I feel fine about it. Not great, but fine. At the least I am living, which is more than I can say for my former self. I consider that a win.