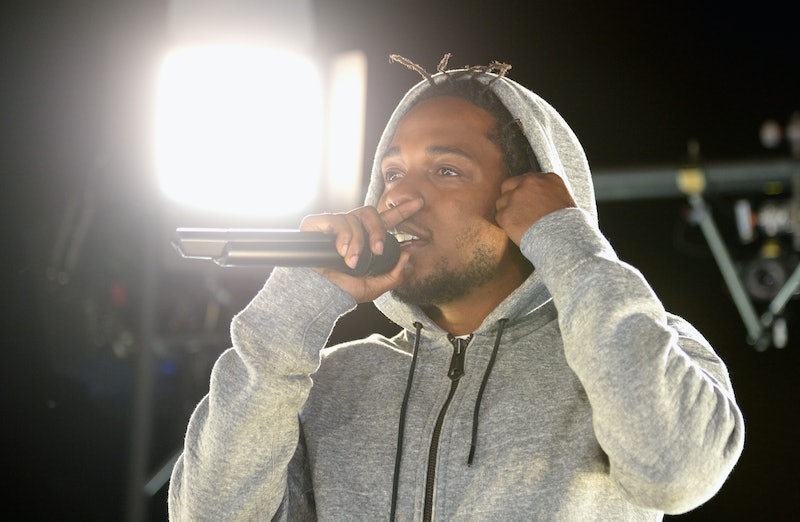 By now, everyone knows that Kendrick Lamar is one of rap's biggest heavy hitters — the release of his latest album To Pimp a Butterfly was so highly anticipated, the music world had a collective freak out when the album secretly dropped a week ahead of schedule last spring, and critics have been singing its praises ever since. Unsurprisingly, the album nabbed 11 Grammy nominations, proving that Lamar's career trajectory is on the up and up as 2016 rolls steadily along. But one aspect of his life that doesn't get quite as much attention, but that seriously deserves some, is the super sweet romance Lamar has with his high school sweetheart, Whitney Alford.

Lamar has been dating Alford for nearly a decade (!!) and he confirmed their engagement back in April of last year, telling the Power 105.1 radio show The Breakfast Club that he was in fact engaged, adding, "Yeah, definitely. I'm loyal to the soil." (Swoon!) If cuteness overload hasn't settled in yet, he also told Billboard last January, prior to their engagement announcement, "I wouldn't even call her my girl. That's my best friend. I don't even like the term that society has put in the world as far as being a companion — she's somebody I can tell my fears to."

There's obviously nothing cuter than high school sweethearts who can go the distance, so if you're looking to gawk at the pair's cute photos, now's your chance to do so judgment-free.

A Match Made In Award Show Heaven

They clean up well!

In The Christmas Spirit

How cute are they?!

Her Outfit Is Fire

I can't be the only one obsessed with this stylish pair. I can't wait to see what Alford will wear down the aisle when she and Lamar say "I Do." I have a feeling it's going to be crazy-stunning!