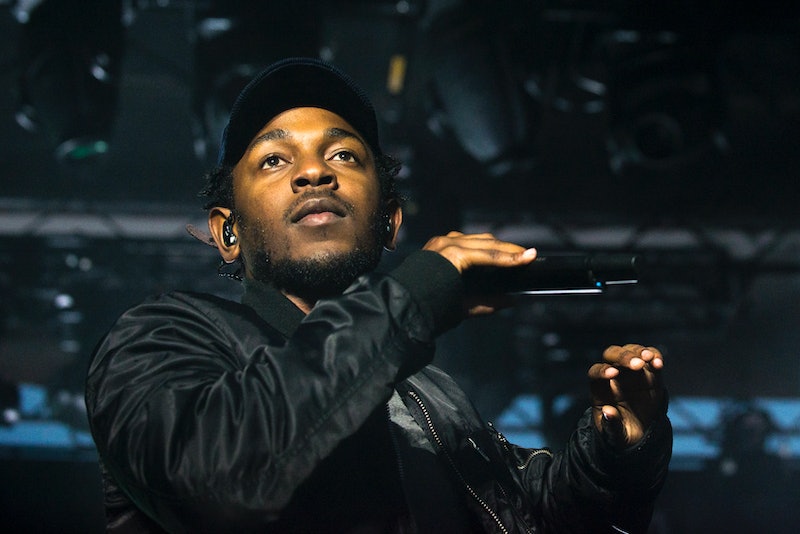 Even though Kendrick Lamar's new album wasn't scheduled to drop until next week, he pulled a straight up Beyoncé and casually released To Pimp a Butterfly Sunday night via Twitter. I guess the whole secret album drop schtick is kind of the in thing now, and we should probably all get used to it at some point. In the meantime, it's pretty effing exciting to get an album an entire week ahead of schedule. There are good surprises and bad surprises, but this is definitely a good one. To Pimp A Butterfly is the third studio album from the 27-year old rapper, and it's pretty damn good.

But here's the thing about dropping a surprise album — NO ONE WAS PREPARED FOR THIS KENDRICK LAMAR. So now I'm supposed to scramble around trying to get a hot take on each of these tracks from a single listen? Never gonna happen. His stuff is too good for that. It requires a million listens to truly get the significance of every lyric.

So, instead, we're going to quite literally judge this book by its cover to help those who didn't have time to grab more than a quick listen before they fell asleep. Looking at the track title of each song enables me to tell you not only what it's about, but what it reveals about Lamar. It's very important work that I'm doing out here.

Ah, so now we know Lamar watched 30 Rock, as this is a clear reference to the theory that we should all be settling for whoever in our lives we run into the most, á la Liz Lemon and Wesley Snipes! Michael Sheen must be pretty psyched to have a whole song written about his character.

This has got to be a think-piece on how awkward it is to be the first person to dig into the cheese plate at a party. That's something that resonates with all of us, buddy.

Not even gonna joke around with this one, it's about Kunta Kinte, who had his right foot chopped off after attempting to escape the plantation where he was enslaved. And it's damn good.

Higher education is an institution, so I'm betting this is a song with a bunch of tips and tricks for writing the perfect college essay. Bonus points if it includes an incisive takedown of the new SAT.

This one's about the Wall Family, who live next door to Lamar. Except he always gets them confused with another set of Walls who live upstate, so he wrote the song to help him keep track.

This one isn't actually a song, it's just the beginning of a "u up?" text that Lamar fell asleep before sending.

You know how, when people ask you how you are, they don't really care? Well, Lamar found a solution to that problem, which was to write a track that you can just start playing as soon as someone asks. There's no better way to pique someone's interest in your day than by having an answer ready-made and three minutes and 39 seconds long.

About that doggie in the window.

If this one isn't about "Mama June" Shannon from Here Comes Honey Boo Boo, then I won't know what to do with myself. We've gone too long without a music-based think piece about her and her family.

I'm from Oregon, so I recognize the reference on this one to Mt. Hood. Probably Lamar tried to start a utopia of sorts on its slopes, but the whole venture fell apart because there was no bipartisanship. What a shame.

"How Much A Dollar Cost?"

Lamar's finally gonna tell us about that time he got a concussion and literally forgot how much a dollar cost. Been waiting a long time for this.

This one is pretty confusing for me because it feels like it's all over the place. I'm guessing it'll be a remake of that Christina Aguilera song that was like "When will my reflection show / who I am inside?" — just with "complexion" substituted in instead of "reflection". Y'know, for kids with acne? That Kendrick Lamar, always a role model.

"The Blacker The Berry"

OH BIG FOOTLOOSE FAN IN THE HOUSE HUH??? (That's where that song "Mama Says" is from.)

Lamar is finally gonna tell us what he thought about the movie I Robot. And based on the title of his review, seems like he could've done with way fewer robots.

Probably the one I'm most excited about, because it involves Lamar pitching an entirely new superhero to all of us. Cannot. Wait.

Okay, so if you listen to the epic majesty that is this latest Lamar album, you'll probably end up thinking that these songs are about something else. However, I stand by my theory that this is all what Lamar was really trying to say with these new songs — and that just makes me love them more.

More like this
Adam Levine & Behati Prinsloo Welcome Their Third Child Together
By Jake Viswanath
Harry Styles Is Performing At The 2023 Grammy Awards
By Jake Viswanath
Brad Pitt Wants To Share The Spotlight With This Celeb In Shania Twain’s “That Don't Impress Me Much”
By Alyssa Lapid
Meghan Trainor & Daryl Sabara Are Expecting Their Second Baby
By Jake Viswanath
Get Even More From Bustle — Sign Up For The Newsletter
From hair trends to relationship advice, our daily newsletter has everything you need to sound like a person who’s on TikTok, even if you aren’t.