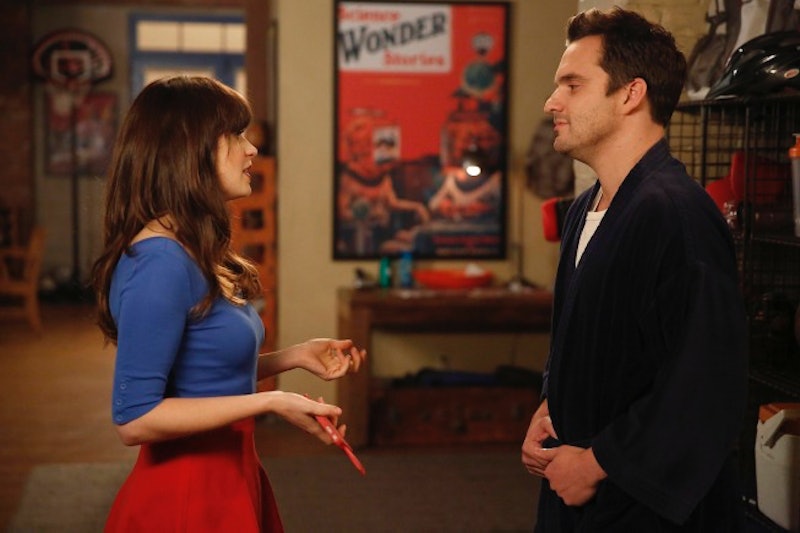 You never forget your first love — especially if your first love is Seth Cohen, or some version of him, at least. Adam Brody will guest star on New Girl on Tuesday, Feb. 4 and he'll be playing Jess's ex in an episode aptly titled "Exes," which tries to prove that former flames can stay friends. We already know where this is going because we've seen it before, in 2004, on Adam Brody's other FOX show — The O.C.

Here's the thing about Seth Cohen — or as he's referred to in this episode of New Girl, Berkeley — his exes NEVER fall out of love with him. See: Summer Roberts. (Also, feel free to stop for a second and wonder if his New Girl name is a reference to the college where his O.C. parents, Sandy and Kirsten, met.) So if Jess is bringing him back into the picture, Nick Miller should be worried. Really, really worried.

According to the episode's synopsis, Nick runs into his terrible ex, Caroline, and because he's Nick MIller he doesn't handle it very well. Cue Berkeley aka Seth Cohen 2.0, so she can introduce him to Nick and prove that exes can stay friends even after they've moved on. (Brody's character is a stay-at-home dad, which would be SO Seth Cohen if there was a series reunion.) Berkeley even looks like what we imagine Seth Cohen would at this point with long, effortlessly styled curly hair, a t-shirt that he's probably had since college, and wide-collar, printed cardigan. YOU ARE SO COOL, SETH COHEN. E! has the first photos of Berkeley here and our hearts are already melting.

So, not exactly the same as when Summer introduced Cohen to her new boyfriend, Zach and his fabulous hair — but I know you're already envisioning a future New Girl where Berkeley and Jess are the ultimate hipster couple. If "Exes" were an episode of The O.C. (which it might as well be, honestly, if they're going to make the character exactly like what we've imagined Seth Cohen to grow up to be) here's how it'd probably pan out:

Just because she's got a point to prove.

Nick And Berkeley Meet And Become Friends Right Away

Because just like Zach before him, Nick will be unable to fight off his charm — and also comic books.

Things Would Get Kind Of Weird

After spending so much time with Nick/close to Jess, Berkeley won't be able to pretend anymore.

And Jess Would Try To Prevent This From Going Further

But it won't work and things will get really out of control. EMOTIONS EVERYWHERE.

Jess Would Get Overwhelmed And Freak Out

And she'd have to tell Nick.

But he already loves Berkeley so much that he can't even be mad, so he composes himself.

But Jess will still try to deny it — I mean, they did break-up once before, how does she know it won't happen again?

And Then She'll Finally Give In

Something really romantic like this will happen. And then this:

Wherein Berkeley supports Jess in going overseas to teach underprivileged children and they live happily ever after. And just like Zach, who we remember only for his fabulous hair and his fake Italian girlfriend Francesca — Nick Miller will become a footnote in Seth Cohen's love story 2.0.