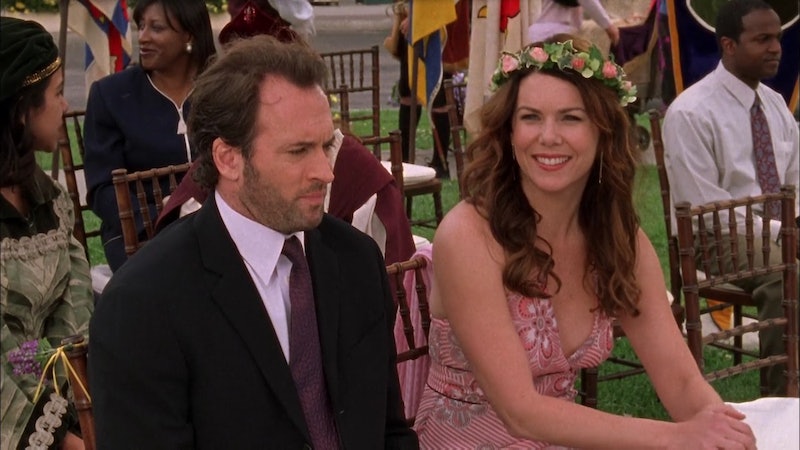 A TV episode doesn't need to be set in February to be romantic, and sometimes you don't want to sit down for a whole movie. Luckily for us, Netflix offers a variety of options, too. Though, let me just say that I am so glad Downton Abbey isn't on Netflix anymore — I am not ready to talk about Matthew and Mary and "Christmas At Downton Abbey" it is always too soon. A couple of my favorites, like Pushing Daisies and My So-Called Life aren't streaming here either. There are plenty of shows on Netflix that I'm not the best judge of too, like Doctor Who and Pretty Little Liars, though I've heard both of those have been known to bring the feels. Was Mad Men ever romantic? I saw the whole thing when it aired and I'm still not sure.

So all that is to say that this is one girl's opinion. Here are 19 romantic TV episodes that I recommend. Get the popcorn and cupid's arrow ready!

I debated about this for a while. Some might prefer the happy ending of "Once More With Feeling," but this is one of the best Spike episodes — and as twisted as he is, the ending to this episode is one of the realest and romantic moments in the whole show.

Pam and Jim's wedding is a nice romantic escape and their first kiss memorable (albeit a bit awkward) but this episode — which ended with the show breaking format by Jim interrupting a confessional to ask Pam out — still takes my breath away just thinking about it.

I don't think I want to pick sides with Rory's boyfriends, so while there's no Logan in this episode, it is very romantic for Luke and Lorelei (you can always let your Netflix autoplay take over and watch the next episode, where they finally kiss, too.) PS: It's also the episode where Jess asks Rory to run away with him — which I don't believe ever happens in real life and therefore must be romantic, right?

It's never a bad time to watch "The Constant." I'm also partial to "LaFleur" and "The End" — but those are more controversial than this Desmond and Penny classic.

Oh Season 3, so brought with Ben and Leslie tension. I also love 'The Smallest Park" in Season 4, when Leslie lays her feelings out on the line. But in terms of pure romantic joy, we gotta go with their first kiss.

While we're on the subject of recent good first kisses. If you need me, I'll be watching this gif on a loop...

You better believe it. Meredith's speech every day.

There are rarely happy endings on Skins, but this episode has some of the sweetest moments. Chris and Jal spend a day bettering themselves by the other's standards.

Come on, it's a literal fairy tale. OUAT has taken a lot of turns, but nothing beats the curse on Storybrooke breaking and Snow's reunion with Charming.

Because we're still talking about who our lobster is.

OK, so there's some serious business with the President going on in the background, but ignore all that for the most adorable Josh and Donna subplot of all time. It only took them five more seasons to kiss on the mouth, no big deal.

The Mulder and Scully 'ship is one of the most painful in television history. In this episode, when Mulder has cancer, their feelings were bubbling to the top.

This isn't the most romantic show, but this episode is a particularly good one for Connor and Oliver.

It's never simple with these crazy kids, but I think the finale has some of the most romantic moments.

Honestly, you gotta get past the name and watch this whole series — it's short, romantic, and very funny. But if you've already seen it, skip to the end and revisit that finale.

I'm not really ready to reconcile with Ted Mosby and his choices, so why don't we stick with an epic Lily and Marshall episode? Nothing is more romantic than a ritual!

OK, some may prefer "War Stories," but there's nothing more traditionally romantic than a ball and a duel, and what other sci fi series gives you both in one episode?

No matter who you 'ship on this show, everyone's definitions of love make this episode all-around feel good and romantic.

Let's end on a grand romantic gesture, shall we? Chuck's return from Europe with gifts and those three words with eight letters is one of the best.