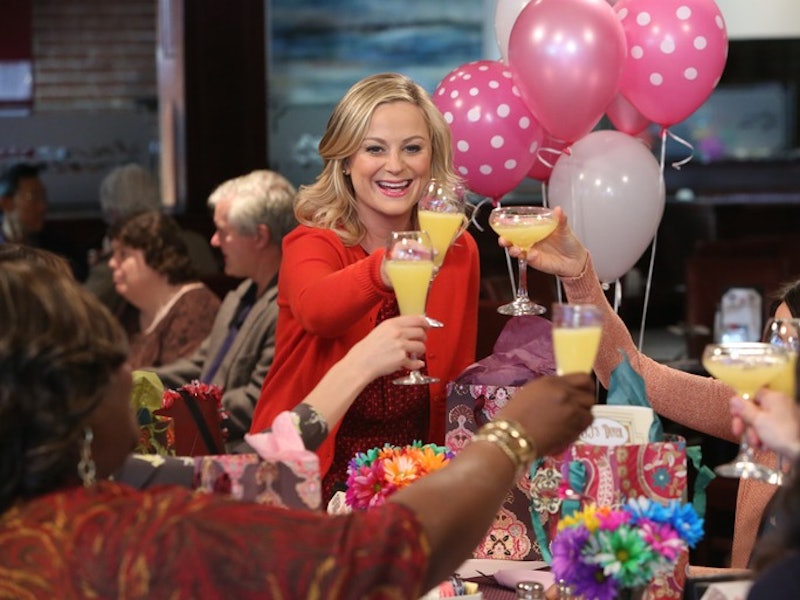 Whether you consider yourself to be a romantic person or not, Valentine's Day is pretty much an unavoidable time of the year. Supermarkets become flooded with heart-shaped chocolates and PDA sightings can be found around almost every corner. (Seriously, people, get a room!) Even some of our favorite television shows make a point of honoring this love-centric holiday. In fact, there are a variety of Valentine's Day-themed episodes that can be found on Netflix to help get you in the mood for, well, getting in the mood. It doesn't matter if you're in a relationship or completely single, these episodes provide the perfect balance of love and laughter to help make any viewer enjoy themselves on February 14.

From terrible blind dates (Oh, my, gawd!) to magical love spells gone horrible wrong, these shows have offered up some of the most relatable (and not-so relatable) scenarios that can occur during the most romantic day of the year. So whether you're looking for the perfect Netflix and Chill ambiance or are just in need of a time out from real-life romance, you won't find a better selection of Valentine's Day episodes than this lot. With that in mind, sit back, relax, and get ready to fall even more in love... with TV.

1. Friends — "The One With The Candy Hearts"

Running into your ex at any time can be super awkward. Accidentally going on a double date with them on Valentine's Day, however, is a billion times worse. (Could his luck BE anymore terrible?) But if Chandler Bing can make it through such a trying holiday, then so can we all. (Season 1, Episode 14)

I mean, is there anything better than a Valentine's Day scavenger hunt? Only when the likes of Andy, Ron, and Ben are attempting to solve it. Forget about romance, this bromance is everything you'll ever need. (Season 4, Episode 14)

Even the most skeptical romantics won't be able to resist getting all the feels during this Warbler performance. And what's wrong with that, I'd like to know? (Season 2, Episode 12)

In an attempt to win his ex Cordelia back, Xander asks Amy to cast a spell to make her fall back in love with him. The only problem is, every other female in Sunnyvale is affected by it... and it's a love they're all willing to die for. (Season 2, Episode 16)

There's nothing like a party with our favorite Upper East Siders to tug at our heartstrings... or just rip them out altogether. Not only did this mark Dan and Blair's first real kiss (a relationship I try to pretend never happened), but it also served as an introduction to Lola (aka the real Charlotte Rhodes), who became a more prominent member of the group for the remainder of the season. As usual, everyone looked fabulous. Xoxo. (Season 5, Episode 15)

Because nothing says happily ever after like a trip to the dentist. Liz Lemon is all of us, always. (Season 4, Episode 13)

8. How I Met Your Mother — "Desperation Day"

Barney teaches the gang all about the joys of Desperation Day: the day before Valentine's Day when a woman's standards are at her lowest. Ah, romance! (Season 6, Episode 16)

Much like the title suggests, this episode was all about Michael and Holly's ongoing public displays of affection and how it starts to make everyone at the office feel uncomfortable. (Classic Michael!) But any awkwardness gets immediately forgotten when Michael drops the L word on Holly, proving once and for all that these two crazy kids are meant to be. (Season 7, Episode 16)

After finding herself single for the first time on Valentine's Day, Jess persuades Schmidt to be her wingman, which leads to some pretty hilarious results. Gotta watch out for those youths. They're everywhere. (Season 1, Episode 13)

Tempers run high when Lorelai, Luke, Rory, and Logan decide to take a weekend trip to the Huntzberger house on Martha's Vineyard, but it still leaves plenty of room for romance and the usual Gilmore charm. Plus, Martha's Vineyard! (Season 6, Episode 15)

Created by the amazing Leslie Knope, this holiday (which takes place the day before V-Day) is all about ladies celebrating ladies over some drinks and delicious breakfast food. And really, what could be better than that? (Season 2, Episode 16)