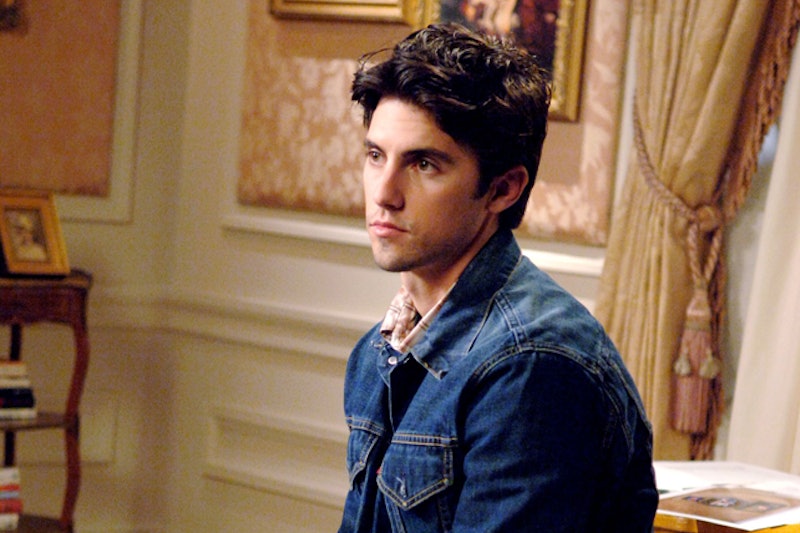 It is actually happening, everyone: Jess Mariano is returning to Gilmore Girls . You know what this means: Rory and Jess could be endgame! Life is perfect — except, I need to know more and I need to know more now. Milo Ventimiglia took to Twitter to announce the return of Jess with a photo of a Gilmore Girls ' script for the Netflix revival. The script in question has Ventimiglia's name stamped across the front of it, proving this is not some beautiful shared dream everyone is having, but is indeed reality.

Given the last time Gilmore Girls fans saw Jess it was Season 6 and Rory was telling him she was in love with Logan, it's only natural for Jess and Rory fans to be freaking out right now. There was so much left unsaid between Jess and Rory, and now there is a very real possibility that those things are going to be said. There could even be a wedding! I mean, I have no proof of this, but dream big or go home, right?

There is maddeningly little to go on where Jess' return is concerned. There is only one photo to parse for clues and it is a picture of a script cover page — but I shall persevere. Everyone put on your deerstalkers because when it comes to the return of Jess, no clue is too small to speculate over.

1. Jess Will Appear In A Daniel Palladino Episode

Daniel Palladino wrote the last Jess scenes of the series in "The Real Paul Anka," so it is only fitting for Jess to return in a Daniel episode. He is duty bound to unbreak your heart.

2. Ventimiglia Doesn't Want You To Know What "Season" He Is In

That strategically placed pen is covering the episode number on the script. Each episode is a different season, which means this could be super valuable information. Is it winter? Is it spring? Summer? Fall? Well — yes, it is definitely one of those seasons, because those are all the seasons.

3. Jess & Rory Are Probably Having A Baby

That is a Gerber pen, my friends. Gerber makes baby food. Babies eat baby food. Jess and Rory are having a baby — I mean, that's definitely not a random pen choice. Ventimiglia is trying to tell us something. I SEE YOU, MILO.

4. Jess Will Be Around In October... Maybe

OK, I am at least 45 percent sure one of the words you can see through the first page of the script is October. It could also be "remember" or "butter" or virtually any word that ends in "r," but I am choosing to believe it says October because Jess always looked amazing in sweaters.

5. Jess Is Still Breaking The Rules

That script clearly says it's not supposed to be reproduced. Rebel Jess lives!

6. There's Going To Be A Scene Involving A Cafe Table

The script is clearly sitting on one of those iron outdoor tables generally found around cafes. From this information, I am going to deduce there will be a scene where Jess and Rory reconnect outside of a New York café, because that is definitely not just the table where Ventimiglia happened to be sitting when he took this photo.

7. Something Major Will Happen Between Jess & Rory

Stay with me here. This script is dated Feb. 3, and the month of February has historically been a pivotal month for Jess and Rory. The episodes "A-Tisket, A-Tasket," "Swan Song," and "Nag Hammadi Is Where They Found the Gnostic Gospels" all aired in February, and "The Real Paul Anka" aired in April — which means it was probably filmed in February. In conclusion, history dictates this script will include important Jess and Rory happenings.

Remember how Jess left all those notes in Rory's copy of Howl? Well, I definitely see some underlining going on through the page there. Jess is still the only person you wouldn't punch for writing in your favorite book.

9. Jess' Return Will Cause A Major Uptick In Happiness For All Gilmore Girls Fans

Since this photo hit the Internet everything is beautiful and nothing hurts. True story.

Treasure this moment. Jess Mariano is back, and the one thing I know for sure is his return is going to be everything you've been waiting for since the last time you saw him in Season 6. How could it not be? Jess never disappoints.