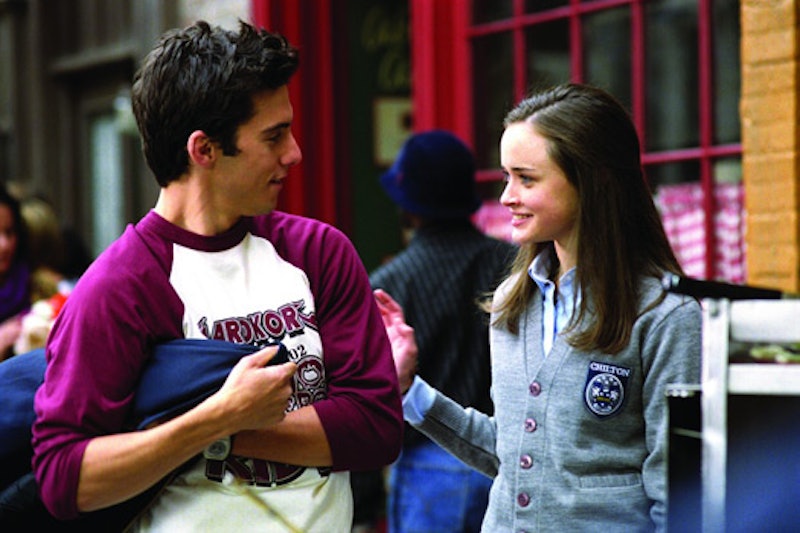 As long as there have been teen dramadies, there have been 'shipper wars. Spuffy versus Bangel, Chair versus Dair and... whatever portmanteaus apply to Rory Gilmore and her main love interests, Jess Mariano and Dean Forester. In fact, that's one of the biggest divides between Gilmore Girls fans, which is ridiculous — because Jess and Rory's relationship was obviously the endgame pick between the two.

Put down your pitchforks, Dean and Rory shippers. I see the appeal of Dean, make no mistake. With Dean comes all the adolescent trappings of first love, wrapped up in the gigantic, gorgeous package that is Jared Padalecki. When Jess was doing some outmoded, chip-on-his-shoulder James Dean thing, then, yes, I admit that he wasn't necessarily the ideal boyfriend.

But Jess, aside from really nailing that roguish bad boy appeal, shared rare chemistry and compatibility with Rory. Hell, those crazy kids even dated in real life, no joke. So I approach this with fairness, but also strength of conviction. Here are seven overwrought and overthought things that make Jess the superior boyfriend for Rory when compared to Dean — because, come on, those two are so endgame it hurts.

1. Jess and Rory Had A Shared Passion for Books

Books got a shout out in Rory's high school graduation speech, you guys. That's how serious she is about reading. And Jess understood that, so much that, upon their first meeting, he stole Allen Ginsberg's Howl and Other Poems and returned it... with notes. Dean, bless his heart, saw Rory reading from a distance and was impressed by how engrossed she was in it. Engrossment with a book is clearly not something Dean's familiar with.

Yeah, I wasn't big on the whole build-a-car thing that Dean did. That is a BOLD move for a 16-year-old to pull on his girlfriend of three months, and then he gets all pissy that Rory doesn't say "I love you" to his declaration of insanity? Hmm. Again, from the teenage perspective, I kind of get the melodrama behind this, but as an adult, I look at this whole situation as just... no.

3. Jess' Bad Decisions Were Impulsive and Romantic in Their Own Way

Jess ran away from Stars Hollow (several times), with Rory's best interest in mind. Even though showing up at Yale with a "Run away with me!" plea was Crazy Town, it's sort of sweet, and you got the sense that Jess was not his best self in that moment.

Dean made the very conscious decision to get married to his new girlfriend at 18 years old. When he sucks at being teen married (as most teenagers do), he finds his way back to Rory through spontaneous virginity-taking, and poor Lindsay gets caught in the crossfire. There's a certain scary awareness in those kind of poor life choices, you guys.

Not initially, of course. Jess, for all we know, is still pretty much a high school drop-out, and Dean is at least an illustrious college drop out. Regardless, in bits and pieces after he left for Venice Beach, we really saw Jess getting his life together. He wrote a novel, he was working at an independent publishing company in Philly, he was finding himself, and he was carving out a respectable life.

Dean was like, "Guess I'll get teen married and fall casually into a life of construction."

5. Jess Came Back for Rory Time After Time

Dean was done with the show after his final Rory break-up, while Jess popped up during the college years in... mostly constructive ways. That dinner with Rory and Logan was disastrous, but he tried.

6. The Rory and Dean Arc Had Clearly Run Its Course

But the difference was that Rory and Jess both matured in their time apart, Jess especially, allowing for a much healthier relationship sometime in the future.

7. Jess Really Understood Rory, and Dean Had to Make an Effort

Jess was a kindred spirit to Rory, an intellectual, a lover of reading and punk rock. They brought out the best in one another because they recognized each other's strength. It was Jess who inspired Rory to go back to Yale, and Rory who inspired Jess to write his first novel.

Dean, for all his positive qualities, was always a little off with understanding Rory. He gives Max Medini some pointers about getting along with the Gilmores ("They like parmesan cheese, go with their bits," etc.), and these are things he's learned from observation.

It can't be stressed enough that Jess is not perfect for Rory, but he offered potential, and that gives us hope. In time, there's definitely more of a chance that they'll find their way back to each other, unlike Dean, who's doing manual labor in Nebraska or something. Jess and Rory forever.