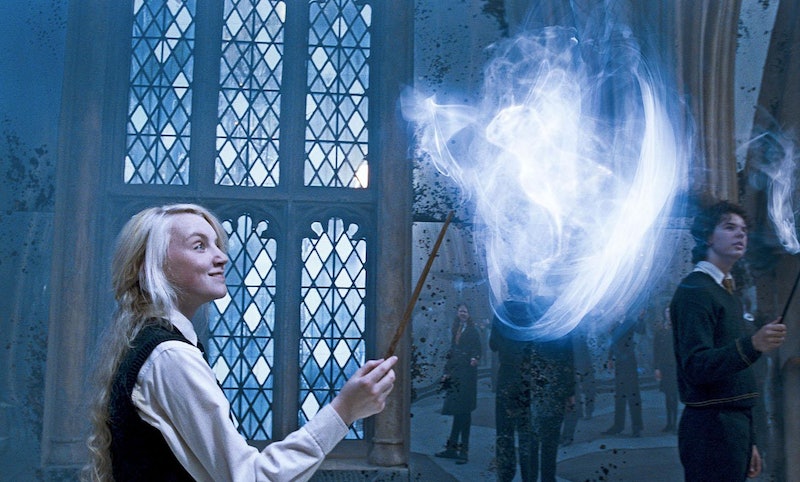 For many people, Harry Potter is a series that represents hope. After all, the story itself has so many hopeful moments: Harry, a seemingly unremarkable boy, discovers an entire world brimming with magic and overcomes a series of obstacles to bring peace back to the wizarding world. Not only does that world offer him hope, he offers the world hope by defeating the dark lord. Even when times seem dark, the characters in Harry Potter hold onto the belief that good will win in the end, and it’s this spark that keeps them going — and keeps us reading.

For fans, the hope you get from the series might sound less epic than the plot itself. Maybe you had a terrible day, and reading the series gives you a glimmer of faith that tomorrow will be better. Maybe you can relate to the characters, and their successes give you confidence that you can also be successful. Maybe you’re even inspired by J.K. Rowling herself, and the story of an unpublished author creating a beautiful and lasting series gives you motivation to work towards your own goals. Wherever it comes from, it’s clear that Harry Potter is a series full of hope, from the plot to the backstory to several great quotes.

1. When he had been younger, Harry had dreamed and dreamed of some unknown relation coming to take him away, but it had never happened; the Dursleys were his only family. Yet sometimes he thought (or maybe hoped) that strangers in the street seemed to know him.

2. "The Patronus is a kind of positive force, a projection of the very things that the dementor feeds upon — hope, happiness, the desire to survive — but it cannot feel despair, as real humans can, so the dementors can't hurt it. But I must warn you, Harry, that the charm might be too advanced for you. Many qualified wizards have difficulty with it."

"What does a Patronus look like?" said Harry curiously. "Each one is unique to the wizard who conjures it." "And how do you conjure it?" "With an incantation, which will work only if you are concentrating, with all your might, on a single, very happy memory."

3. A glass case next to it held a magnificent silver sword with large rubies set into the hilt, which Harry recognized as the one he himself had pulled out of the Sorting Hat in his second year. The sword had once belonged to Godric Gryffindor, founder of Harry’s House. He was gazing at it, remembering how it had come to his aid when he had thought all hope was lost.

4. “Do nothing unless I command you!” Voldemort shouted to the Death Eaters. And then an unearthly and beautiful sound filled the air. . . . It was coming from every thread of the light-spun web vibrating around Harry and Voldemort. It was a sound Harry recognized, though he had heard it only once before in his life: phoenix song. It was the sound of hope to Harry . . . the most beautiful and welcome thing he had ever heard in his life.

5. "Time is short, and unless the few of us who know the truth do not stand united, there is no hope for any of us."

—Albus Dumbledore, Harry Potter and the Goblet of Fire

6. [Cho] had definitely chosen to come and talk to him, and that made the second time in two days . . . and at this thought, Harry’s spirits rose. Even the ominous sound of Snape’s dungeon door creaking open did not puncture the small, hopeful bubble that seemed to have swelled in his chest.

7. “Did you not understand my note, Minerva?” asked Professor Umbridge in honeyed tones, quite forgetting to cough. “Of course I understood it,” said Professor McGonagall, her teeth clenched so tightly that the words came out a little muffled. “Well, then, I am confused. . . . I’m afraid I don’t quite understand how you can give Mr. Potter false hope that —” “False hope?” repeated Professor McGonagall, still refusing to look round at Professor Umbridge. “He has achieved high marks in all his Defense Against the Dark Arts tests —” “I’m terribly sorry to have to contradict you, Minerva, but as you will see from my note, Harry has been achieving very poor results in his classes with me —” “I should have made my meaning plainer,” said Professor McGonagall, turning at last to look Umbridge directly in the eyes. “He has achieved high marks in all Defense Against the Dark Arts tests set by a competent teacher.” Professor Umbridge’s smile vanished as suddenly as a lightbulb blowing... "[T]his boy has as much chance of becoming an Auror as Dumbledore has of ever returning to this school.” “A very good chance, then,” said Professor McGonagall.

8. "You are a symbol of hope for many, Harry. The idea that there is somebody out there who might be able, who might even be destined, to destroy He-Who-Must-Not-Be-Named — well, naturally, it gives people a lift."

9. “I never really gave up on you,” [Ginny] said. “Not really. I always hoped. . . . Hermione told me to get on with life, maybe go out with some other people, relax a bit around you, because I never used to be able to talk if you were in the room, remember? And she thought you might take a bit more notice if I was a bit more — myself.”

10. Kingsley showed no pleasure at the sight of any of them. Over Hermione’s shoulder Harry saw him raise his wand and point it at Lupin’s chest. “The last words Albus Dumbledore spoke to the pair of us!” “Harry is the best hope we have. Trust him,” said Lupin calmly.

11. "I got this one,” he indicated another slash to his face, “for asking how much Muggle blood she and her brother have got.” “Blimey, Neville,” said Ron, “there’s a time and a place for getting a smart mouth.” “You didn’t hear her,” said Neville. “You wouldn’t have stood it either. The thing is, it helps when people stand up to them, it gives everyone hope."