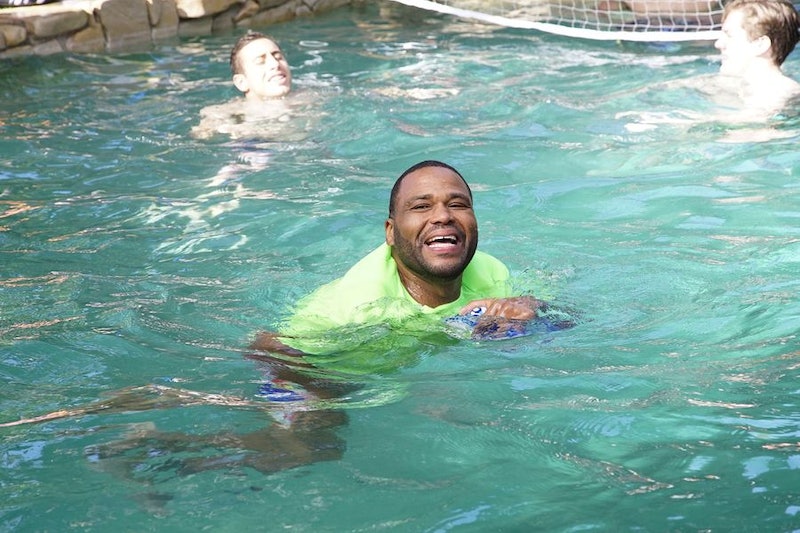 After an inexplicable three-week hiatus, black-ish returns by jumping into yet another stereotype deconstruction. And rather than going for religion, politics, or economics, black-ish covers the stereotype that black people can't swim. And even though it might seem like a slight topic, via the sporadically-used voiceover function, the show does a mini history lesson about the politics of swimming — and serves as a reminder that even some of the seemingly innocuous facts of black history were fueled by the presence of white supremacy. And for the most part, the fun deconstruction goes swimmingly (I know, that was bad).

When the Johnsons routinely get ignored by neighbor Janine's pool parties, Dre becomes fixated on getting an invitation. And his insecurity about the fact that he actually can't swim is what winds up fueling him to confront his neighbor and drives the final setpiece where, of course, he spectacularly fails to prove his swimming skills. Another nice twist is that while Janine and her husband are portrayed as cluelessly and somewhat offensively terrified of black people, it's Dre and Bow's established hatred of her and her family that drove her to exclude him.

The swimming plotline's only failure? The tag about the video of Dre's drowning going viral, mostly because I hate the idea of sitcom characters becoming Internet famous.

However, I can't give this episode full marks, because its B and C stories are much stronger and cohesive ideas, but wind up getting underbaked, something that would never happen to one of Jack's casseroles. I've been waiting for a Bow-centric episode, and her inclination to shame what she thinks of as moms taking the "easy" route could have been a perfect choice. As it is, though, the only lesson she learns is that the woman she was judging is beautiful, does yoga five times a week, spends all of her time volunteering, puts on a subservient air in front of her nerdy husband, and... is also a surgeon. I understand why it works in a basic teach-a-character-a-lesson way, but it's a bit of a cop out. Bow doesn't really learn much besides not to judge a blond woman by her cover. And how does it tie in with Zoe's quest to buy Chanel on GoFundMe?

Meanwhile, another interesting premise is wasted in this swim-centric episode: Jack and Diane switch spots in their Boy and Girl "Rovers" associations, ignoring Ruby's insistence that they should fit their pre-assigned gender roles. But again, it doesn't resolve very well. Overall, sloppy finishes take what could have been a great episode into just another solid installment of black-ish Season 2.

More like this
Adele’s All-Female Lineup Includes Kacey Musgraves, Mahalia, & Self Esteem
By Shahed Ezaydi
Everything We Know About When To Expect The Rest Of The Upshaws Season 2
By Kadin Burnett
Zooey Deschanel Can't Be Anyone But Herself
By Samantha Leach
Superman & Lois Season 3 Will Introduce A Complicated New Supervillain
By Brad Witter
Get Even More From Bustle — Sign Up For The Newsletter