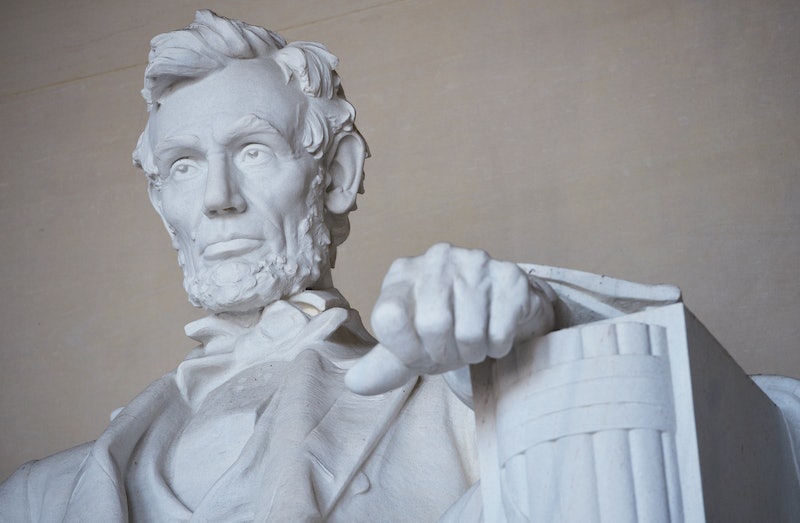 Friday is a big day: It's former president Abraham Lincoln's 207th birthday. The man that foresaw the current lumberjack facial hair trend — he was, indeed, the first president to rock the full beard look — was born on Feb. 12, 1809. He issued the Emancipation Proclamation and is regarded as a noble historical figure who morally opposed slavery and helped to eradicate it by leading the Union during the Civil War. As a figure of equality, it makes sense that Lincoln would also be a feminist. Was the 16th president a champion of social rights endeavors across the board? The answer is... sort of.

During his time in office, insistence upon slavery was tearing up the nation. Thus, ending the atrocity and achieving some greater form of racial equality (natural rights, as he dubbed it) was Lincoln's top priority, and rightfully so. Though women suffragists often quoted him in an effort to gain support, Lincoln was not actively forthright when it came to his views on women. Nevertheless, he has proven to be a beacon for overall equality among all humans, suggesting that, by extension, he believed in the feminist movement's causes.

In the 1800s and early 1900s, women's right to vote defined first-wave feminism, which focused largely on addressing legal issues. In the early 1900s, after Lincoln was assassinated, women suffragists in Washington invoked Lincoln to help further their cause, holding up signs that read, "Lincoln said women should vote." The signs were designed by suffragist Missouri T. B. Hanna and ultimately helped convince the state to pass the suffrage movement in 1910. It featured a quote from the former president:

I go for all sharing the privileges of government who assist in bearing its burdens, by no means excluding women.

Unfortunately, the politician's words were taken out of context at the time. According to the Gilder Lehrman Institute of American History, the letter from which the quote was taken was addressed in 1836 to the Illinois General Assembly. In context, the part about women was included in parentheses as a secondary point:

I go for all sharing the privileges of the government, who assist in bearing its burdens. Consequently I go for admitting all whites to the right of suffrage, who pay taxes or bear arms, (by no means excluding females.)

The Institute's webpage goes on to quote Lincoln biographer David Herbert Donald, who claims that Lincoln's mention of females was irrelevant to the women's suffrage movement. During that time, Lincoln was a member of the Illinois House of Representatives and women had yet to earn the right to own property, let alone pay taxes or bear arms, automatically excluding them from Lincoln's proposed "right of suffrage."

Though he didn't explicitly fight for women's right to vote, the women's suffragist movement supported Lincoln during his time in office, suggesting he was friendly towards their goals. Susan B. Anthony, who played a large role in winning women the right to vote, backed Lincoln's policies during her involvement in the Women's Loyal League.

According to Lincoln, democracy entailed equal rights and equal opportunity. However, he also believed that beyond natural rights, such as freedom, civil rights such as the right to vote should be left up to the states to decide.