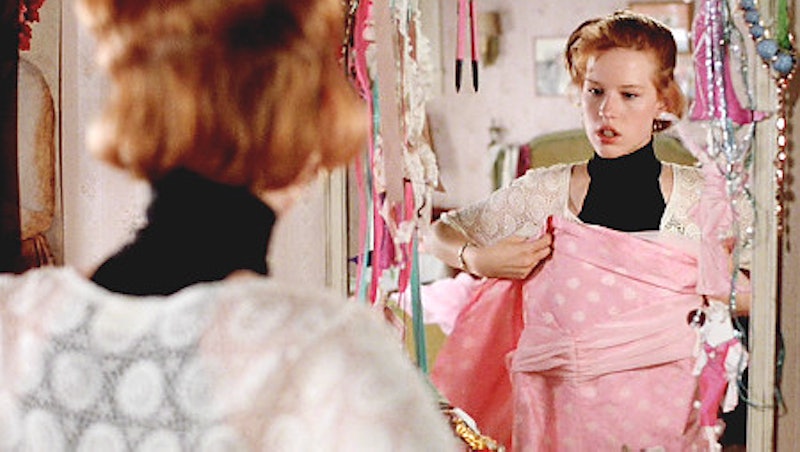 When you think of '80s fashion, nothing is more iconic than Molly Ringwald's dress in Pretty in Pink. Whether you fell in love with the movie when it came out, or discovered it years later, it's a film that's withstood the test of time, one that we can all relate to and universally love. On the 30th Anniversary of Pretty in Pink , I was fortunate to speak with the movie's costume designer, Marilyn Vance, and learned exactly what went into creating that iconic prom dress. Spoiler: Not everyone was as in love with it as we are.

The '80s teen movie turns 30 on February 28 (can you believe it's been 3 decades since it came out?), and if you haven't seen it yet, I highly suggest streaming it on HBO NOW, where it's available during the anniversary. But if you've already discovered the brilliance of the film, then you might be curious to know some behind-the-scenes info about that infamous dress from the woman who created it herself, Marilyn Vance.

You obviously know that the dress Andie wears to prom was her own creation, a reflection of her unique, individual sense of style, made by combining the dress her father bought her and Iona's prom dress, but what you may not not know is that the actual dress from the film was made the same way. Vance went down to Van Nuys boulevard in LA and bought a dress at a Mexican dress shop (for a girl's Quinceanera), and then combined it with another dress. "We put together oddball pieces that brought her character to life because she had no money. She had individuality and humility, so I had to work that into it," Vance says.

And as iconic as the dress has become, Molly Ringwald would have probably preferred not to wear it. "Molly hated the dress with a passion," Vance says. Imagine how different the movie would have been if the dress was more to her liking?

Pretty in Pink's legacy is undeniable, but Vance reveals that she had no idea it would have such a lasting cultural effect. "It's unbelievable to me. When you're doing a project, you really don't count on it becoming iconic, or even doing good at the box office, you're just serving the characters in the movie to move the story along, so I am so honored [to be a part of it]," Vance says.

This dress goes down as one of the semional moments in movie fashion history, and the fact that it's still buzzed about 30 years later pretty much says it all. Happy anniversary, Pretty in Pink!

More like this
Here Are All 703 Outfits Rachel Wore On Friends
By Kat George
Sydney Sweeney Just Revived The Iconic ‘90s Cone Bra Trend
By El Hunt
The Best Heels For Bunions, According To A Podiatrist
By Margeaux Baulch Klein and Maria Cassano
The 10 Biggest Tattoo Trends Of 2023
By Carolyn Steber
Get Even More From Bustle — Sign Up For The Newsletter