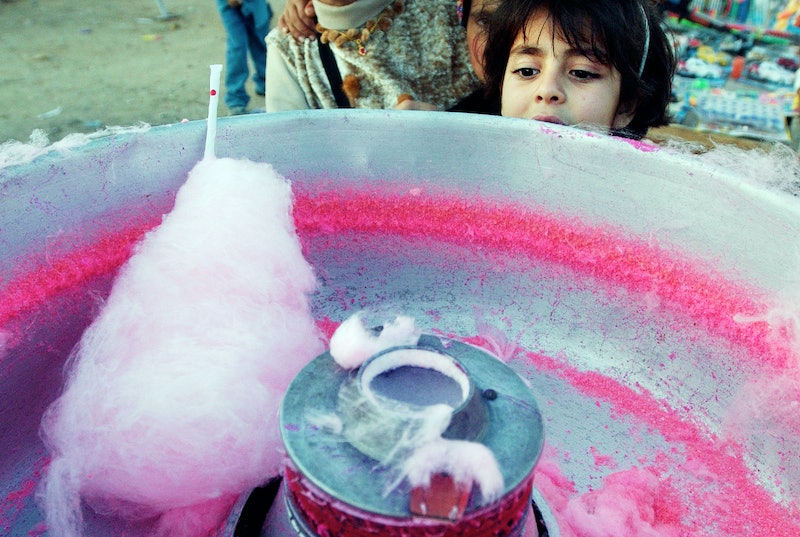 The latest advancements in medical research might be sweeter than you’d think. A research team from Vanderbilt University is using cotton candy machines to make artificial blood vessels — that’s right, machines just like the ones that make sticky, colorful sugar clouds at carnivals and fairs. Who knew that the gadgets responsible for your childhood sugar highs (and inevitable sugar crashes) might someday be used to make artificial organs?

The research was led by Leon Bellan, an assistant professor of mechanical engineering at Vanderbilt. In a press release, he explained that the idea to use a cotton candy machine to produce artificial capillaries (the body’s smallest blood vessels) first came to him as a grad student when he attended a lecture on tissue engineering. “The analogies everyone uses to describe electrospun fibers are that they look like silly string, or Cheese Whiz, or cotton candy,” he said. “So I decided to give the cotton candy machine a try. I went to Target and bought a cotton candy machine for about $40. It turned out that it formed threads that were about one tenth the diameter of a human hair — roughly the same size as capillaries — so they could be used to make channel structures in other materials.”

Figuring out how to use cotton candy as a mold to make viable artificial capillary systems was a challenge. A lot of research in tissue engineering uses water-based gels known as “hydrogels.” But although hydrogels work well for creating artificial tissues, they posed a problem for use with cotton candy. As anyone who’s eaten the stuff knows, cotton candy dissolves when it’s exposed to water — and hydrogels are water-based. What Bellan needed to figure out was how to coat the cotton candy (or cotton candy substitute) in the gel without dissolving the candy’s intricate, tiny threads. But after the gel was set, he then needed to be able to dissolve the candy, leaving behind a network of tiny passageways, through which cells could travel.

He found the solution in a polymer called “PNIPAM.” PNIPAM is insoluble at some temperatures and soluble at others, so Bellan and his colleagues could spin “cotton candy” from it, keeping it at a temperature that would keep it from dissolving in water, and use it as a mold for the gel. Once the gel had set, they could lower the temperature to the point at which PNIPAM would become soluble, and the PNIPAM “candy” would dissolve. What was left was a cell-friendly, three-dimensional artificial capillary system.

In a recent article published in Advanced Healthcare Materials, Bellan and his fellow researchers report that this artificial system has so far been able to keep cells alive for more than a week. This method of creating artificial capillaries is still in the research stage, but Bellan hopes that it will eventually help to support artificial organs. He said, “Our goal is to create a basic ‘toolbox’ that will allow other researchers to use this simple, low-cost approach to create the artificial vasculature needed to sustain artificial livers, kidneys, bone and other organs.” In a video about his research, he adds, “The sci-fi version would be that you would like to be able to basically build an organ from scratch.”

Find out more about Bellan’s research in the video below.