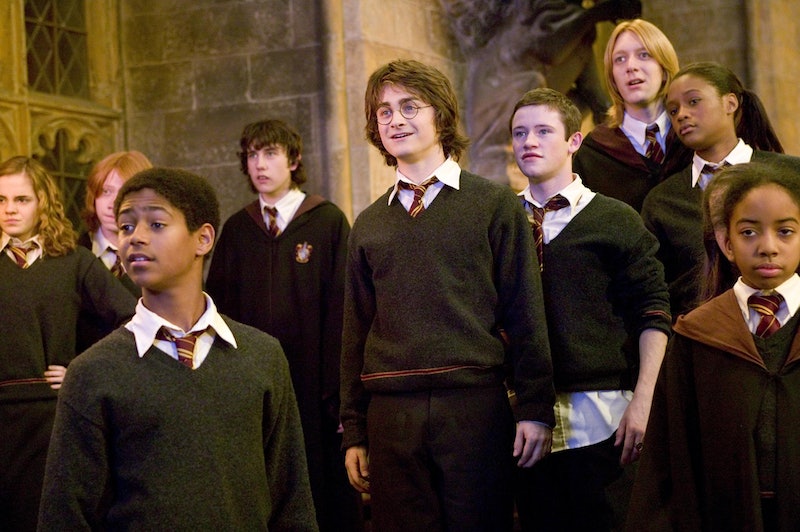 But at long last, scientists have devised an elegant solution to the Which 'Harry Potter' Character Would I Be? conundrum. As any centaur will tell you, the answer is written the stars: Your zodiac sign can reveal whether you're a know-it-all Hermione Granger or a devil-may-care Sirius Black. I mean, didn't Professor Trelawney prove to us that astrology is infallible and always correct?

We've got some time to kill before the new Cursed Child script book comes out, so we might as well find out which HP character embodies our cosmic personality. And look, I know that these Zodiac signs don't all line up perfectly with the characters' official birthdays. But the universe works in mysterious ways. Besides, do all you Capricorns really want Voldemort as your Harry Potter Zodiac match? I didn't think so.

So if you've ever wondered which Hogwarts student (or alum) the heavens have picked out for you, here are the 12 Harry Potter characters of the Zodiac:

People would call you hot-headed, if they weren't so afraid of your bat-bogey hex. But even if you have a bit of a temper, you make up for it by being the enthusiastic, outgoing, tough customer that you are. Adventurous and independent, you manage to assert yourself despite having six older brothers. And when it comes to relationships, you never apologize for having fun or for liking the people you like (even when your brother is being a huge jerk about it). Most importantly, you never settle for anyone unless they're as strong as you are.

You're dependable (or as some might put it, stubborn), and you make a great friend. You like your creature comforts (and your feasts), and you wouldn't turn down an extra galleon or two, so some people might mistake you for a shallow person. But you're not shallow at all: your emotions run deep, far deeper than anyone around you might guess. When it comes to love, you have a lot of tender feelings hidden away under the surface. And even though you're the stubborn, steady bull, you can still bring the fun when the situation calls for it. (You're also pretty solid at Wizard Chess.)

I'm sorry Geminis, I know you were holding out for the Weasley twins. And while the Weasley twins are as energetic and entertaining as any Gemini, it's Malfoy who's got the whole dual-personality thing going on. You're living a double life, and you're good at keeping up appearances no matter what's going on underneath. The rest of the Zodiac likes to put you down, but they're just jealous of your intense mental energy. You can appear mysterious and detached, but really you're highly adaptable and quick on your feet (and maybe just a little bit misunderstood).

You've got the biggest heart in the Zodiac, and you love your family, friends, and pets with ferocity. Yes, you can be a little moody, and sometimes you just want to sulk in your hut. But even though you can be insecure and eccentric, you're loyal and loving to the very end. Like the crab, you've got a hard outer shell and a soft, sensitive interior (which is why you can see past other creature's tough outsides, be they students or blast-ended skrewts). You don't even mind that Harry didn't bother to name any of his kids after you. (I mean... Severus over Rubeus? Seriously?)

You're the main character, because of course you are. You're not an egomaniac though (at least, not most of the time), you're a natural born leader, and people look to you to show them the way. The plus side of being the center of attention is that you attract loyal friends, who you'll do anything to protect. The down side is that it seems like everything is always happening to you. Luckily, you've got the strength of character to weather any storm (but seriously, you wouldn't mind taking a break from the spotlight once in a while).

Perfectionist doesn't even begin to cover it. You're often the most organized of the signs, and you're confident and caring to boot. You can come off as fussy and narrow-minded, but that's not really you: Deep down, you're an incredibly compassionate person who cares about doing the right thing above all. No house-elves are going to suffer under your watch. You don't mind letting other people take center stage, but when it's your turn to shine, you're luminous. As long as you're not stressing over that A-, you're an unstoppable force of well-organized genius.

You bring balance to the Zodiac, and people love you for it. Even when you're wearing a threadbare cloak, everybody's into you. You seek harmony, and you manage to stay charming and sane even when your life doesn't turn out quite the way you imagined. All you want is a life of peace, but your constant balancing act can make you a little indecisive (poor Tonks). In the end, though, you'll make the right choice: you just like to think things through (and to try and avoid ripping innocent children to shreds with your wolf fangs).

Look, Scorpios, I'm not saying that you're all violent Death Eaters (please don't hurt me). I'm just saying that you're the most passionate, resilient, and powerful sign in the Zodiac. And think what you want about Bellatrix Lestrange, but she's not lacking in passion or power. Plus, it takes a whole lot of resilience to bounce back from Azkaban. You're fanatically loyal to the people you love, and secretive when you need to be. Above all, you will survive anything. Your emotions run deep, and even people who don't quite understand you have to respect you (or fear you, which is basically the same thing, right?).

Sagittarius is the sign at the top of the guest list for any party, because you're the fun one of the Zodiac. You're expressive and full of a love for life (even if you've spent most of yours in wizard prison). No one should try to tie you down, because you're a restless soul, and optimistic even in dark times. You're independent and not always that tactful, but at the end of the day you're one of the most free and generous signs in the cosmos. You believe that anything is possible (which might be why you don't always give the best advice to your godson).

You're the patient, ambitious member of the Zodiac. You're good at biding your time and keeping to yourself, and you will persevere through any situation. People never quite know what's going on in your head, but that doesn't bother you: you're as self-reliant as they come (and you know how to get what you want). Your ambition can be seen as cold or even calculating, but you're also capable of all-consuming love. When it comes to relationships, you desire a permanent connection. Because underneath that efficient exterior, you're really a hopeless romantic (just don't take your romantic frustrations out on your potion class).

People may call you eccentric, but you don't really mind. You're a creative, forward thinker, and you're too busy looking at the big picture to let the haters get you down. Above all, you're a humanitarian, dedicated to the greater good (and willing to make a few sacrifices along the way). You're also quick to solve problems, outgoing when it suits you, and the leader of the Zodiac ever since the Dawn of the Age of Aquarius. Even though you can get a bit caught up in being a heady intellectual, you are also able to command the loyalty of everyone around you.

You're the dreamer. The sensitive, mysterious, and often gifted dreamer of the Zodiac, who's always looking for the magic in the world. Other people might not always "get" you, but they'll admire your unique take on things. You might stand out from the crowd a little with your turnip earrings and your cork necklaces, and you can be sensitive about being misunderstood, but your resilience and wild imagination makes up for it all. And when you do find people who appreciate your creativity, you love feeling connected to others more than anything else. Don't let anyone tell you that crumple-horned snorkacks don't exist.