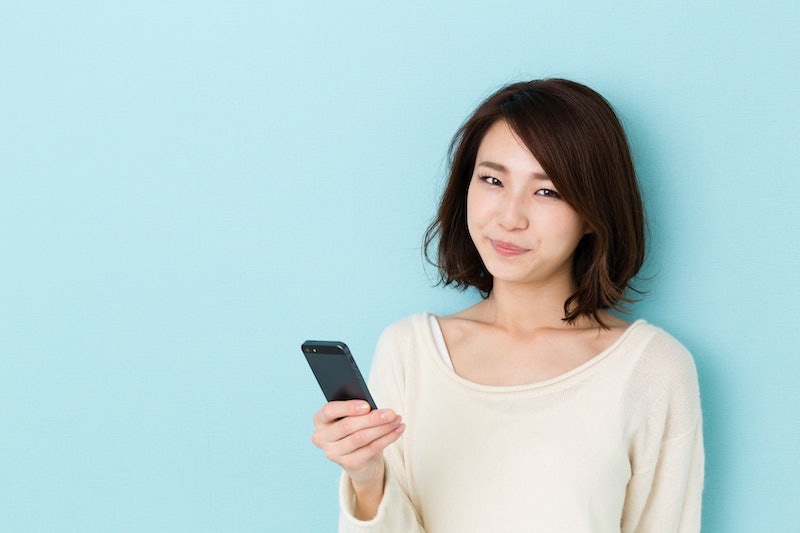 The other day at an epic, three-hour brunch in the West Village in NYC, my friend announced that she's going to try online dating. "But what do you do if you regret giving your number to someone on a dating app?" she asked. She assumed that Tinder automatically gave your number to potential matches, which is thankfully untrue and would cause outright pandemonium and mass blocking if it were. It's still a legit question, though: Almost anyone who has tried online dating has, at one point or another, shared their telephone number with a match only to regret it later. Whether it's the 2 a.m. "sup" texts, the jackrabbit texts ("hey," "hey are you there," "hey did you get this?") or just unwanted contact after ties have been cut, some people outlast their texting privileges and don't know how to take "no" for an answer.

In a new study of 384 people conducted by communications company Bandwidth, exactly this topic was analyzed, and they turned up some interesting results. It seems as though phone-number–sharing regret runs deep, anonymous texting and calling might be the answer, and people are just looking for connection. Here are five revelations from the just-released study, including a very cute infographic.

Almost 60 percent said they have regretted giving their phone number to someone online, which sounds low — until you consider the phrasing of the question: "Have you ever contacted someone through a dating site and regretted giving them your phone number?" Apparently, the 40 percent that said no reflects the larger group who have never contacted someone on a dating site at all — and the likely much smaller group who have contacted people online, but have no regrets.

A whopping 78 percent agreed or "somewhat agreed" with the statement, "I can create a stronger personal connection with others over the phone, instead of over email." Even though we live in Texting Nation, apparently most people still think phones are where true intimacy lies. But who knows, by "over the phone," people might have meant "via text." For all I know, no one even knows that phones make actual phone calls anymore.

At least among the respondents to this survey. Only 12 percent said they often share their number on dating sites, hugely overshadowed by the quarter who said they never do and 60 percent who said they do so rarely, which begs the question: Who, exactly, was tapped for this study? Old people?

4. Anonymity Is Where It's At

Of the group surveyed, 84 percent said they'd feel safer dating online if they didn't have to give out their actual phone number, which I can totally get down with. There are apps that disguise your phone number, such as Burner, Pinger, TextNow, Mustache (for texting only) and many others, but some of these all seem to have certain drawbacks (hidden fees, etc.). That said, I'd rather take the hit for a hidden fee or two than field texts from a stage five-clinger at four in the morning.

5. People Are Worried About Their Safety Online