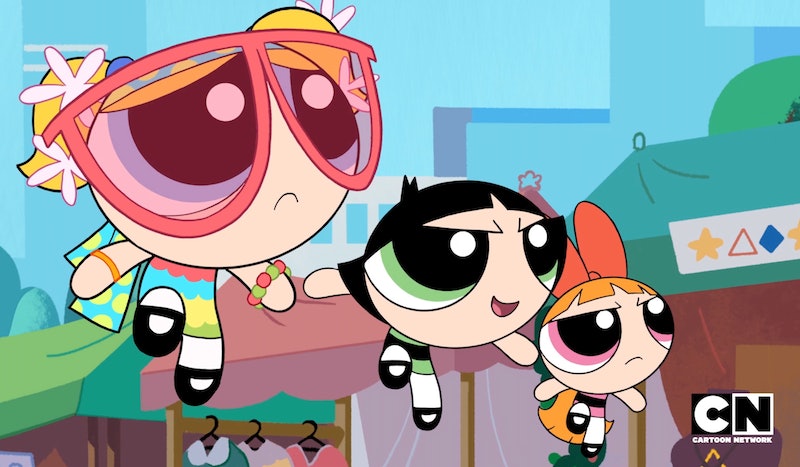 Sugar, spice, everything nice, and a heaping dose of feminism. These were the ingredients chosen to create the exquisite cartoon that was The Powerpuff Girls. From 1998 to 2005, the Emmy-winning animated series chronicled the adventures of a trio of sisters who, thanks to the clumsy Professor Utonium, happen to boast superpowers. Back in 2014, the news broke that Blossom, Bubbles and Buttercup will be returning to the small screen, and, after the first clip from The Powerpuff Girls reboot hit the web, I couldn't help but reflect upon the fact that The Powerpuff Girls was the most feminist show around, at a time when I was too young to appreciate it.

Fans of the show should be pleased to know that it seems like the reboot is going to keep on carrying out the original iteration’s feminist message: when a brawny, bearded villain dares to call Buttercup "princess," the green-clad heroine gives her a piece of her mind. And by "mind," I mean "both of her fists." To gear up for the series' revival, here are some of the feminist moments from the original Powerpuff Girls series that, if you didn't notice as a kid, you definitely notice as an adult.

1. This Excerpt From “Superfriends”:

Bubbles: Whoa! Look at all those weights! I bet our new neighbor is strong and very manly.

2. And This Excerpt From “Superfriends”:

Blossom: Hey! Look at all that plasticware.

Bubbles: What if our new neighbor is a beautiful lady and falls madly in love with the Professor?

Buttercup: Just because you see plasticware doesn't mean it has to be a girl.

Blossom: Yeah. Boys need a place to put leftovers, too.

OK, yeah supervillain Femme Fatale wreaks a bunch of havoc (and doesn’t really understand what gender equality means), but she also addresses issues like the lack of women on American currency (hence her fondness for the Susan B. Anthony coin) and a disproportionate number of female superheroes in comic books. Femme Fatale's overall ethos is misguided, no doubt, but she makes a few solid points.

4. When The Girls Learn A Valuable Lesson (“Equal Fights”)

By the end of the episode, the Powerpuff Girls realize that being empowered should not come at the expense of others' rights. They don't want special treatment. They want equal treatment.

5. When The Show's Narrator Tries To Laugh Off The Lack Of Female Narrators ("Equal Fights")

At the end of the episode, the show’s narrator snarks that there are “no chick narrators.” And then we hear what sounds like a piece of metal being chucked at the narrator. The narrator asks, “Who threw that?” Answer: WE ALL DID.

6. When The Powerpuff Girls Save The Association Of World Super Men (“Members Only”)

The Powerpuff Girls go to Mount Neverest in order to seek out join the Association of World Super Men. The three sisters pass the membership test with flying colors, but Major Glory and Co. turn the Powerpuff Girls away. Why? Because they aren’t male. Later, the men of the AWSM put their sexist boots right in their mouths when they’re saved from the villain Mascumax by — you guessed it! — the Powerpuff Girls.

7. This Excerpt From "The Rowdyruff Boys":

Brick: Hey! What’s wrong with you girls? You’re supposed to start crying when we hit you!

Blossom: What are you guys, new?

Buttercup: And it takes a lot more than a couple of cheap shots to make us cry.

Mojo Jojo creates three evil, male counterparts to the Powerpuff Girls: Brick, Boomer, and Butch, aka the Rowdyruff Boys. The boys assume the girls aren't strong superheroes simply because they are girls. Blossom, Bubbles, and Buttercup waste no time in proving them wrong.

8. And This Line From "The Rowdyruff Boys":

Blossom: Whenever [the Rowdyruff Boys'] masculinity is threatened, they shrink in size.

The girls make a mental note of this, natch.

How do the girls thwart the Rowdyruff Boys, you ask? By batting their eyelashes planting smooches on the cheeks of the boys, that's how. The moment things get too "girly," the boys combust.

10. This Chunk Of Dialogue From “Members Only”:

Major Glory: Right! Who pays the rent and puts the bread on the table?

Major Glory: Bingo! And who cooks the meals?

Major Glory: Who does the laundry?

The Professor may be the girls' father figure, but he doesn’t ascribe to traditional gender roles. Oh, you say doing the laundry and the dishes are traditionally “feminine” chores? Bubbles, Blossom, Buttercup, and the Professor are too busy being progressive to hear you.

11. And These Two Lines Of Dialogue From “Members Only”:

Major Glory: Then who mows the lawn and washes the car?

Oh, you say mowing the lawn and washing the car are traditionally "masculine" chores? Bubbles, Blossom, Buttercup, and the Professor are too busy being progressive to hear you.

The Powerpuff Girls reboot is slated to make its triumphant return to Cartoon Network in 2016.