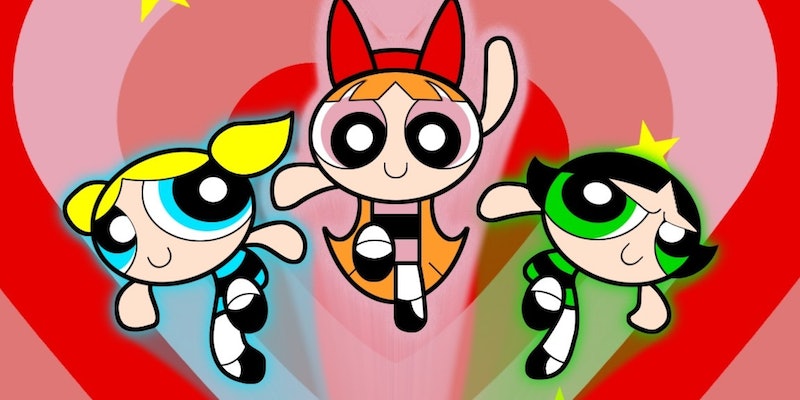 "The original Powerpuff Girls was a franchise phenomenon for Cartoon Network, paving the way for a new generation of innovative storytellers and enthusiastic fans worldwide," said Chief Content Officer Rob Sorcher. "We are calling these girls back into action based upon an overwhelming demand for sugar, spice and Chemical X."

The Powerpuff Girls, for those who have never owned a television or been on the Internet, tells the story of three superpowered kindergarteners named Blossom, Bubbles, and Buttercup who were created in a lab accidentally by Professor Utonium (aka the best father ever) and fight crime before bedtime to save their beloved city of Townsville. It was known for its female empowerment, its distinctive characters, its hidden adult humor, and for almost being called "The Whoopass Girls".

The original cartoon ran from 1998 to 2005, though it existed in cartoon shorts as far back as 1992, and the only thing known about the revival at this point is that the girls are returning for new adventures. Although I have my fingers crossed that they don't change a thing — not the art, not the animation format, and hopefully not any of the voice actors — here are some things they absolutely have to keep.

The Relationship Between the Girls

Like most sisters, Blossom, Bubbles, and Buttercup rarely saw eye to eye, but when it came right down to it they were always, always there for each other. When Bubbles was kidnapped by Him during the episode "Octi Gone", Blossom and Buttercup, who had spent the entire episode arguing, immediately set aside their differences to go and help their sister. When Buttercup fell in love with Ace of the Gangreen Gang in "Buttercrush" and they used it as a means to distract her while they destroyed her sisters, Buttercup immediately dumped him and saved their lives. The Powerpuff Girls are always stronger together than they are alone.

Their Love for Professor Utonium

Professor Utonium might be their creator, but he is first and foremost their father. Sure, there are times when he's overbearing, like in "Uh Oh Dynamo" when he insisted the girls use a giant robot suit to fight crime to keep them safe or like in "Daylight Savings" when he enforced a curfew so the girls wouldn't sleep through kindergarten because of all their crime fighting, but there is nothing the girls wouldn't do for the Professor and nothing the Professor wouldn't do for them. In light of that, this news was the perfect thing to come so close to Father's Day.

Those Jokes You Only Get on the Rewatch

In addition to this little gem from the Powerpuff Girls' completely human friend Robin, there was a lot of hidden adult humor that a fan can only truly understand when they rewatch the show later. For example, the episode "Members Only" featured the girls attempting to gain membership in a men-only club of superheroes and when they are turned away because they're children (and also women) the club is attacked by an alien who wants them to "test their manhood against his own" to see who "measures up". Yeah. That episode title is looking suspicious now, isn't it?

In episodes like "Members Only", and in basically every episode of the show, Blossom, Bubbles, and Buttercup were kicking ass and taking names. They may have been incredibly different in personality — Blossom being the brains, Buttercup the raw strength, and Bubbles the cutesy, girly one — but there wasn't a single one of them who couldn't completely destroy an enemy, especially when their loved ones were in danger. Girl power indeed.

The Powerpuff Girls was also an incredibly feminist show. In the episode "Equal Fights", they run into a villain called Femme Fatale who convinces the girls that women need to look out for one another and it's men who are keeping them down. The girls believe her until other women point out to the girls that being a feminist means wanting equality, not hating men, and that Femme Fatale is hardly a good feminist role model and send Femme Fatale to jail. The girls then gave the greatest speech about feminism in history. Are you excited for the show to come back yet?