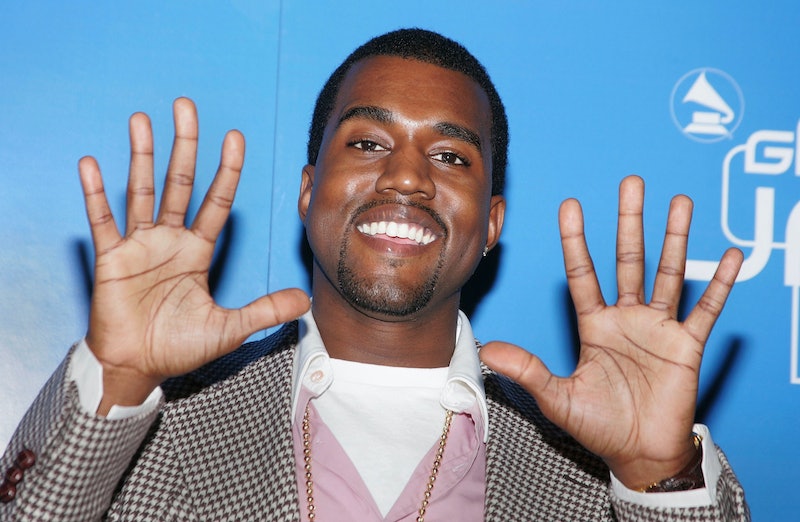 One thing is for sure: you can never call Kanye West unaware. During the reveal of his over-the-top fashion line, Yeezy Season 3 on Thursday at Madison Square Garden, the outspoken Grammy winner decided to upstage most of the music industry and launch the biggest listening party ever with the debut of Kanye's new album, The Life of Pablo. He played track after track in the background as more than a dozen models stood one stage stoic, still, and with blank stares. Then, a spooky pause renders and the song "Feedback" begins to play. It's a song with colliding beats, but it isn't until the end of his rap that West becomes bizarre and self-reflective, painting an almost cubist self-portrait. To top it all off, the track ends with West rapping about literal Kanye memes.

I know, I know, I have no chill, but hear me out on this. West starts talking about "the old Kanye," "spaz in the news Kanye," and everyone's favourite, loving oneself like "Kanye loves Kanye." It is downright hilarious. But it's OK. If you don't believe me that West is criticizing himself and describing his memes, like Yeezy, Imma break it down for you — lyric by lyric, meme by meme. Here are West's "Feedback" lyrics that directly refer to Kanye memes.

2. "Talking 'Bout The Soul Kanye, Set All His Goals Kanye"

4. "I Miss The Sweet Kanye, Top Of The Beats Kanye"

5. "See I Invented Kanye, There Wasn't Any Kanyes"

6. "And Now I Look And Look Around And There's So Many Kanyes"

9. "What If Kanye Made A Song About Kanye"

12. "We Still Love Kanye And I Love You Like Kanye Loves Kanye"

Now, who says West can't be critical of himself in his art? Let's just hope that, this time, his inward contemplation helps him stay out of trouble.