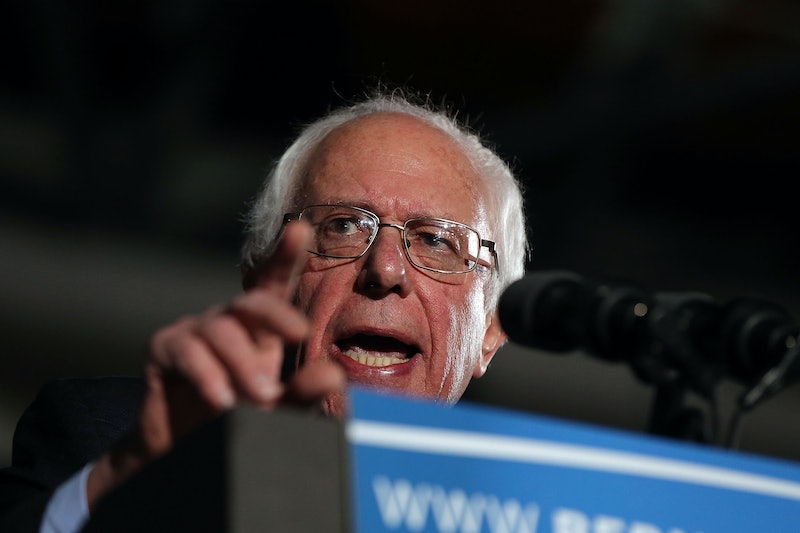 Bernie Sanders returned to the debate stage on Thursday for the who-knows-how-many-I've-lost-count-teenth time during the race for the Democratic presidential nomination. Along with him, Sanders brought his famous finger wag, the spunky gesture he's taken to using whenever former Secretary of State Hillary Clinton says something he doesn't agree with. Fortunately for viewers, he doesn't agree with Clinton very often.

Every candidate has his or her go-to move. Clinton — like many politicians — often makes a fist with her thumb subtly pointing out. Sanders, however, likes to wave his index finger in the air like he just don't care... although it's clear when he does it that he actually does care very, very much. The gesture is sort of a mix between scolding his opponent — typically Clinton — and screaming for attention.

Sanders pretty much gestures continuously with his hands while he speaks. It makes for a very engaging and hardly ever distracting picture. He'll point his finger or move his arms in a way that illustrates his point, but he only reserves the index finger wave for moments when you're imagining him screaming, "I don't think so, missy!" internally. On Thursday night, those moments even included talk of foreign policy, on which Sanders isn't usually considered an authority when compared with Clinton. No matter what the point, though, Twitter seemed pleased with the return of the finger wag.

All jokes aside, Sanders was also criticized on social media by some who thought the finger-wagging was less than presidential. Presidential or not, the finger-wagging seemed to wake up an otherwise restrained debate. It also goes to show that Sanders' eccentric personality probably isn't going anywhere any time soon.