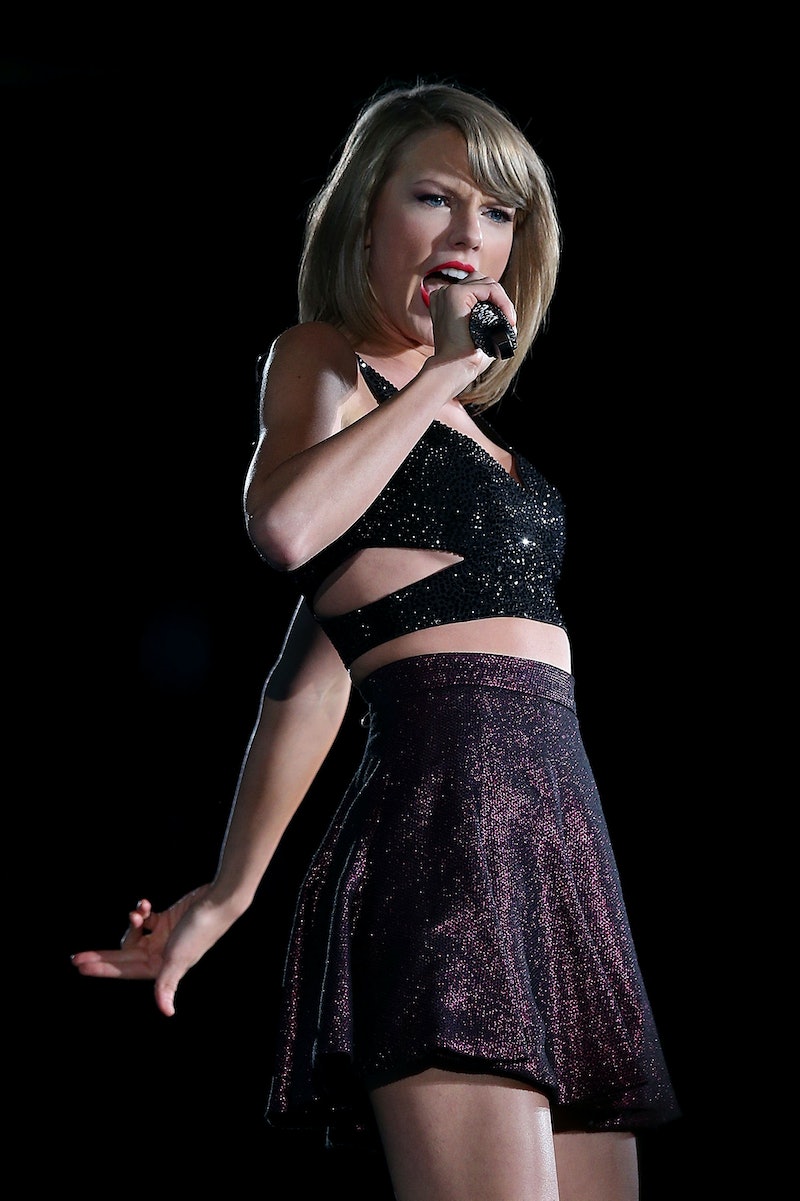 I'm gonna let Kanye West finish, but Taylor Swift didn't need Kanye to get famous. Sure, West got Swift some additional headlines way back in 2009 when he bum-rushed the stage to let everyone know Beyoncé's "Single Ladies" video really should have won the MTV Music Award for Best Female Video. But, let's be honest, West really jumped the gun on this one since Beyoncé went on to win the biggest prize of the night: Video of the Year. Swift won the Best Female Video award for "You Belong To Me" — her first VMA — all on her own, because she was already becoming a pop force to be reckoned after 2008 pop-crossover album, Fearless. That's just one more reason why West's line on "Famous" about Swift — "I feel like me and Taylor might still have sex / Why? I made that b*tch famous" is so offensive. He's taking credit for an accomplishment of Swift's, and, in doing so, reducing her agency in her own career.

On the Friday after West premiered his latest album, The Life of Pablo, the conversation surrounding his music has been Taylor-centric overall. No one seems interested in anything but that "Famous" line. We all want to know how Swift feels about it, and, no matter what West tweets, it's unlikely that Swift condoned or came up with it on her own. In fact, according to her publicist, Swift warned West about the misogynistic line before the album even dropped. Websites are writing up pieces about Swift's brother, Austin, throwing out his Yeezys in solidarity and Swift's #squad showing support by making it clear they're #WithHer. At the moment, it seems like Swift is the one making Kanye famous.

In the years, since West's infamous stage crash, he's apologized for the act, only to retract his apology and apologize again later whenever he needs the headlines. People aren't on his side after the awards? West's out there telling Jay Leno he's ashamed of what he did. When he's got a new album coming out, West is telling The New York Times he has no regrets about stealing the mic. "If anyone’s reading this waiting for some type of full-on, flat apology for anything," he told the paper. "They should just stop reading right now." But, in 2015, on the MTV Video Music Awards stage, West did full-on, flat apologize to Swift for disrespecting her, invoking fatherhood as a reason he should have never done what he did. And now, keeping with this schedule, he's found a new way to insult her, so it's only a matter of time before he's offering his mea culpa.

The Daily Beast has already questioned when the misogynistic battle between West and Swift will be over because it's just so dated. Hip-hop is all about calling out your competition, but West has never seemed keen on this idea that Swift is his equal. This is even more clear with a line that swears that he made her famous. However, a line like that in 2016 just comes off as tone-deaf and uncomfortable — not for Swift, but for Kanye, the 38-year-old man who's still stuck on a battle he started seven years ago.

This "Famous" line seems even more bewildering consider that, in those seven years since West jumped on stage, Swift has sold millions of albums and become one of the biggest pop stars in the world. It becomes downright wrong when you consider that Swift's last album, 2014's 1989 hit the five million mark in just 36 weeks, while West's last album, Yeezus has sold approximately 630,000 copies in nearly three years. No one will deny that West isn't over nor that he's possibly more famous than he's ever been. Of course, he's also got his wife Kim Kardashian and her family to thank a lot for introducing him to a new audience.

West has become such a polarizing figure, with people loving him or downright despising him, to the point that he's almost a parody of himself. That's why it's a good thing that Swift hasn't bothered to directly respond to the line about her. It doesn't really warrant a response for someone of her caliber. Perhaps she's already working on a killer revenge song about him that he can maybe remix. Though, at this point, West may not be famous enough for that.