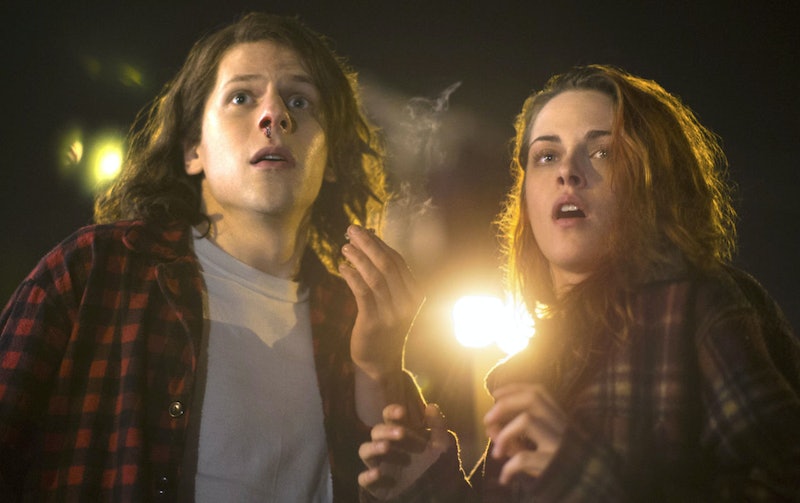 You've all heard someone say it: "I can't smoke weed. It makes me paranoid." Perhaps you can relate, or perhaps you find you judge this reaction. But the fact that it's such a common side-effect of marijuana begs the question: why does weed make you paranoid?

Well, it has to do with your endocannabinoid system, and the way THC interacts with it — and your psychology. As the cannabis site Leafly explains, "Cannabinoids (such as THC) bind to receptors throughout the brain, many of which are focused in the amygdala. The amygdala is involved in emotional processing, governing responses such as fear, stress, and paranoia. When THC acts upon the amygdala, it modifies the neural communication for better or for worse."

But that doesn't exactly explain why some people seem to have a worse reaction than others to the very same joint. To find out more, I surveyed 15 people in their 20s and 30s about their relationship to paranoia and marijuana, and I spoke with Dr. Julie Holland, a psychiatrist and author of The Pot Book: A Complete Guide to Cannabis, who says that the fact that weed makes some people paranoid and not others makes total sense. "Just like some alcohol doesn’t agree with everybody, sometimes pot doesn’t agree with everybody," she says. Here are four risk factors for why weed might be making you paranoid.

1. How Much THC Is In Your Strain (Not Whether It's Indica Or Sativa)

Many people swear that they only get paranoid smoking either sativa or indica strains. "I only get paranoid when I smoke certain strains. I think that indica tends to cause paranoia more than sativa. And to be honest, I'm not sure that "paranoia" is the correct word. I mostly start to worry about things I already worry about, but much more vividly," Anna, 30, responded in the survey I sent out. Marie, 24, echoes this. "I get paranoid when I smoke indicas, rather than sativas. Every single time. Because I have such a strong reaction to one particular type of weed (the whole indica = "in da couch" thing truly being my case), I often assume people just react differently to different types."

But according to Dr. Holland, the difference a strain makes actually doesn't come down not to whether it's indica or sativa — but how much THC is in it. The more THC, the more likely she says you are to get paranoid, since that's where the psychoactive effects come from. "Every strain is different. You can’t simplify it and say that all indica is high-CBD, and all sativa is low, and vice versa. It just doesn’t work that way. There are plenty of sativa strains that can be high CBD or low THC, so no it’s not as simple as picking a sativa or indica," Dr. Holland says. "If you get paranoid, agitated, self-conscious, or get insomnia, you’re going to want a high CBD strain to calm you down and help make you less paranoid." Of course, to know what you're getting for sure, you need to go to a legal vendor, preferably medicinal.

2. Feeling You Have To Hide Being High

Obviously, the fact that in many places marijuana use is still illegal has a lot to do with people getting paranoid when they use it. "I often became paranoid during the early years of my relationship with marijuana because I was smoking in places where my chances of getting caught seemed high: dorm rooms, cars, parks, crowds, etc. Eight years later, I smoke in my own apartment in a city where weed is decriminalized, and I don't have to worry about an RA or a cop knocking on the door," Audrey, 27, tells Bustle.

Dr. Holland confirms that the fact that weed is still often illegal is definitely a factor. "With psychedelics, set and setting are always an issue. And if you need to hide something, you’re going to be paranoid about it and you’re going to be anxious about it. So, it is very possible where cannabis smoking is totally accepted and out in the open and no big deal, you will be less anxious and less paranoid."

Of the 15 people I surveyed about weed and paranoia, seven mentioned that they used to get anxious when they smoked, but no longer do. Only two people noted a shift from enjoying weed anxiety-free to becoming more paranoid in their mid 20s.

"I didn't use to get paranoid! I smoked weed every day from when I was 19 to when I was 25 or so, pretty much without incident. Then, around 25, I started to get really paranoid. I think it's because I changed psychiatric medications and my anxiety level is sort of always at a low simmer these days," Alex, 26, tells Bustle.

Mia, 27, echoes her sentiment. She says she used to "smoke all the time," but now gets too paranoid. That may be because weed has gotten stronger since she started smoking, she says, but she also thinks that perhaps, "something happened in my brain when I became a grown-ass adult such that the chemicals in mj affect my brain differently than they used to when I was younger. Maybe I've got more on my mind? As in, now I have adult problems that I fixate on when I smoke that I didn't used to."

Dr. Julie Holland backs this up as a trend. "The first thing that I noticed when I started doing psychiatry and I asked people about their history [with marijuana] is that a lot of people told me that when they were teenagers and got high they would just laugh and have fun and maybe get a little self conscious — but they would you know giggle and goof around. But when they were in their early twenties, they noticed that puffs started making them feel more anxious, more self-conscious, more paranoid — and a lot of people stopped smoking around that time." Dr. Holland says this makes sense on a social as well as a neurological level; the brain is developing into your mid-twenties, so it follows that your reaction to THC might change.

4. Being Uncomfortable Confronting Your Feelings

Of course, it's possible that you just don't like confronting your feelings in the way getting high tends to make people do. Perhaps you're uncomfortable with your emotions, or you're in an anxious place to begin with — it makes sense that if you then ingest a drug that tends to make you feel whatever it is you're feeling more intensely, that it might make you paranoid. "There are definitely some people that aren’t comfortable with losing control, and there are some people that aren’t comfortable with looking at their own thoughts or at their own behavior as a sort of outsider. You know, not everyone is built for self-reflection," Dr. Holland says. Harsh, but true.

Leslie, 28, puts it another way. "I have never had the luxury of feeling relaxed with weed in my system ... As an individual who worries an inordinate amount and tends to block extreme emotions, daily anxieties run my life. I'm sure weed makes me feel as though I have no control on my outward emotional appearance and I become defensive while under the influence."

That said, for others who are naturally anxious, marijuana might actually be a way of feeling some relief. "I only got slightly paranoid one time. I think it's because I'm an anxious person and I use weed to allow myself to let go of anxiety rather than hold onto control," Mich, 28, tells Bustle. So, just because you're anxious, doesn't mean you'll get paranoid — but it certainly could.

More like this
Here’s What TikTok's "Mascara” Trend Is *Really* About
By El Hunt
These Artists Are Reimagining Black History Month To Create A Better Future
By Katie Mitchell
25 Inspiring Quotes From Black Women To Celebrate Black History Month
By Kyli Rodriguez-Cayro and JR Thorpe
19 Instagram Captions For Celebrating Black History Month
By Ayana Lage
Get Even More From Bustle — Sign Up For The Newsletter
From hair trends to relationship advice, our daily newsletter has everything you need to sound like a person who’s on TikTok, even if you aren’t.