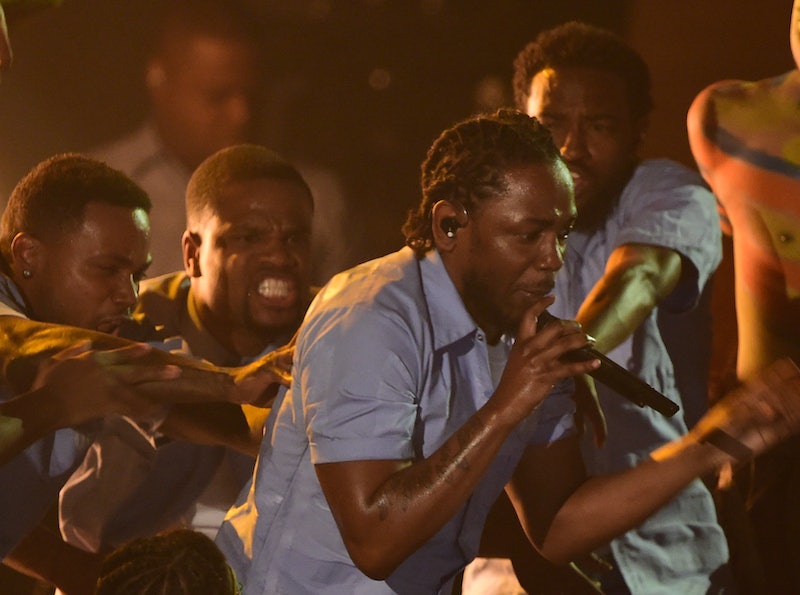 With a whopping 11 Grammy nominations this year alone, Kendrick Lamar set out to crush the 2016 Grammys, and crush it he did. In a year where people of color are severely underrepresented at significant award shows (see: the all-too-telling hashtag #OscarsSoWhite), the To Pimp A Butterfly rapper scored a historic amount of Grammy nominations (second only to the legendary Michael Jackson). Though we still have much left to see of the rapper, Kendrick Lamar's 2016 Grammys performance of "Alright," among other songs, already came, saw, and conquered Music's Biggest Night, bringing the crowd to their feet and proving to the world exactly why it is that he is up for 11 nominations this year.

Lamar performed with a group of men wearing glow-in-the-dark paint that only became visible when the lights went low, causing a burst of glowing neon color to illuminate the stage. But if you thought that was the only surprise that Lamar had in store for the performance, then you were soon proven wrong as he faux stumbled to another side of the stage, in front of a bonfire stage as women danced around him. The performance ended on a light-up screen that displayed the word COMPTON on a map of Africa as if the two were one and the same — both his home. But I can't be the only fan who watched Lamar's performance and, after getting my mind blown, turned my thoughts toward trying to figure out what the message was behind all of this stage magic?

As with all of Lamar's performance, there was a lesson waiting to be learned. His performance was a celebration of African culture, of black culture. It reinforced the idea that Lamar is one of the greatest artists of our generation not just because of the music and the politically-charged lyrics but because of the mastery he has over his art. Lamar didn't just rap; he put on a show. He blasted his audience in the face with his joyful, enthusiastic, and passionate rhymes, the equally passionate dancing, and the stage that was full of plenty of dancers of color. In one fell swoop, Lamar reminded us why diversifying awards shows like the Grammys is such a great thing — because, in the midst of performance after uniform performance, Lamar delivered something not unique and different but warm and familiar to people of color. Something that doesn't get enough spotlight in the mainstream. Representation that just can't be faked, and can't be underestimated for how necessary it is for viewers of color.

In highlighting Compton, in highlighting Africa, in highlighting his roots as a black man in a society that hasn't always been kind to him, Lamar gave us a showstopper we'll all be talking about for weeks to come, and made every black person from every culture, from every country, in the Grammys viewing audience feel unified in their admiration of Lamar.