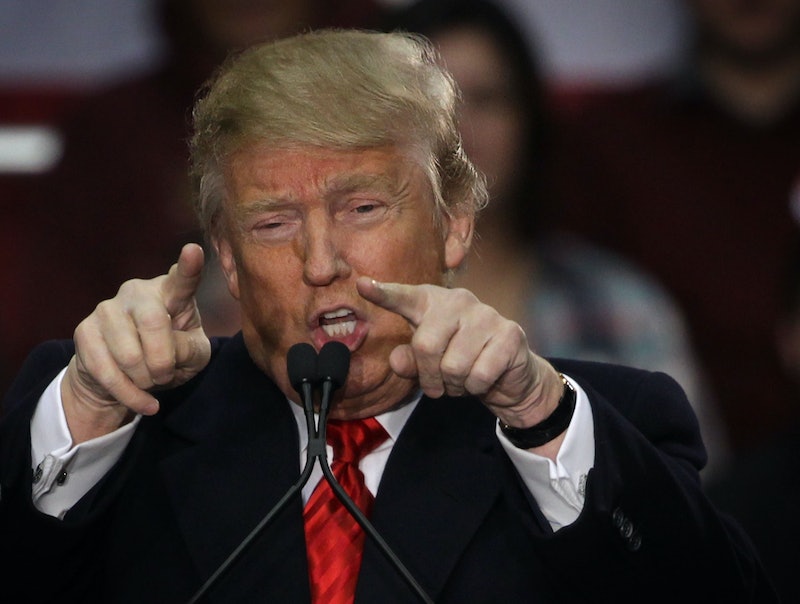 Once again, Donald Trump came to play at the GOP debate on Saturday night. The Republican frontrunner took the momentum from his dominant New Hampshire Primary win and turned that into a debate performance that only upped the ante of his posturing and showmanship. Trump's ceaseless feud with former Florida Gov. Jeb Bush took center stage at the Peace Center in Greenville, South Carolina, almost contradicting the very message of the venue itself. Donald Trump's closing statement appeared to piggyback on that sentiment, as the candidate condemned politicians while aiming to set himself apart from his fellow candidates.

The back and forth between candidates appeared louder than ever on a decidedly less crowded stage with just six presidential hopefuls facing off. The likes of Trump, Cruz, Rubio, Bush, Kasich, and Carson made their presence known, looking to set themselves apart in a state that will prove pivotal to the Republican party in days to come. The GOP is eying an upcoming South Carolina primary on Feb. 20, thus much was at stake for the candidates onstage. Moderator Jon Dickerson once again returned to host a presidential debate this election season, having previously moderated the Nov. 14 Democratic debate. Dickerson touched on issues like foreign policy, immigration, and what the current Republican presidential race means for a party still somewhat divided.

Trump repeatedly attacked Bush, was booed more than once, and appeared almost disgusted by what has been unfolding over not just Obama's term but President George W. Bush's before. His closing statements echo that disdain. The Donald said:

Politicians are all talk and no action. You've seen where they've taken you to. We owe $19 trillion right now. It's going to be increased with that horrible budget from a month ago that was just approved by politicians. We need a change. We need a ver big change. We're going to make our country great again. I say this every night, every day, every afternoon and it's so true: we don't win anymore. We don't win at healthcare. We don't win with ISIS and the military. We don't take care of our vets. We don't take care of our borders. We don't win. We're going to start winning again. We are not going to be controlled by people that are special interests and lobbyists that everybody here has contributed to. And you know what they do? Exactly what those folks want them to do. We're gonna make our country great and we're gonna do the right thing. I'm working for you. I'm not working for anybody else.

Though Trump continues to pull in major support and appears to still be polling higher than any other candidate, the Saturday evening debate showed a crowd divided and unwilling to put up with Trump's rhetoric. The candidate attacked the audience, insinuating that they were all lobbyists, then took the time to address common voters in his closing remarks. Trump's message and slogans were on full display but the ninth GOP debate appeared to show a whole new side to the candidate that voters may not necessarily be embracing. Only time will tell if Trump still has the momentum and support to secure a Republican nomination.