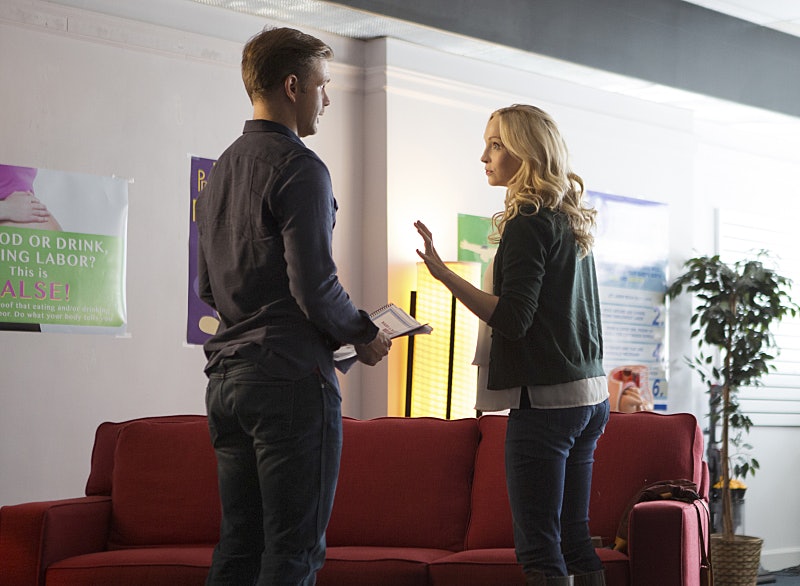 Pregnancy is never easy (or so I've been told), but the pregnancy problems that Caroline is going through on The Vampire Diaries are on a whole different level on the stress scale. During Friday night's episode "Postcards from the Edge," Caroline discovered that the twins are siphoning the vampire magic out of her body, which is causing her to slowly desiccate. Luckily, Valerie was able to rectify the situation (for now), but I doubt this little problem is just going to go away. In fact, it even gave me an idea: what if the twins' siphoning causes Caroline to become human again on TVD ?

Hear me out of a second here. We know that whatever this is won't actually kill or desiccate Caroline (for long) because we've seen her multiple times in the flash forwards. So that's not really a main concern. However, I don't remember seeing Caroline use any of her vampire abilities in the future scenes. Granted, that could just be a coincidence considering these have been very brief glimpses into their future lives. But maybe, just maybe, it was a hint that she's no longer an immortal. It could even help to explain how she was so easily overpowered by the Huntress in Dallas. Originally, I just took it as proof of the Huntress' strength, but maybe it was actually due to her lack of vamp speed and abilities.

I know it seems to be making her desiccate right now, but maybe Valerie will be able to use her witchy powers to prevent that part from happening. But with all of her vamp powers gone, that would just leave her human... right? Not to mention that it would also help to explain what eventually breaks Stefan and Caroline up.

We know they are no longer together in the future. What if, when she became human again, Stefan wanted her to be able to have a nice, normal life with another human, rather than be dragged back into his immortal drama. It certainly sounds like the kind of noble, broody thing that Stefan would do.. And while I suppose that a human Caroline is much better than no Caroline at all, it'd still be a shame to say goodbye to that side of her. Caroline was born to be a vampire and really developed as a person after her transition. Will we really have to see all of that slip away from her? I suppose only time will tell...