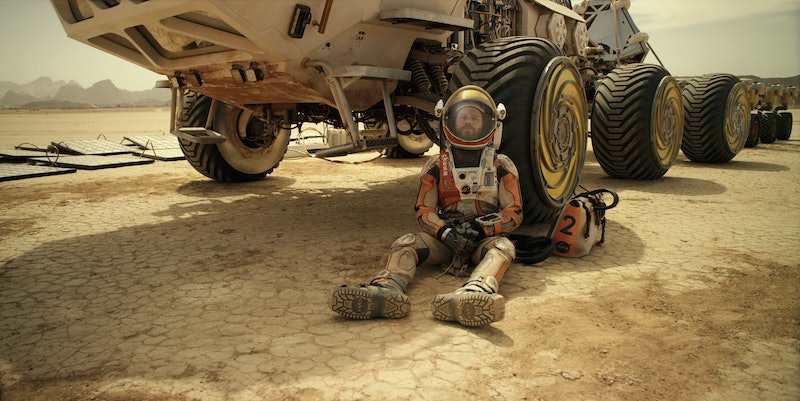 When I was 8 years old I made my own space suit, and from that moment on I've wondered what life might be like on the final frontier. I lived the dream in tinfoil and moon boots for as long as I could, but after a few failing grades in chemistry class and a brush with death on a roller coaster, I realized I wasn't cut out for an astronaut's life... but that doesn't mean I wasn't first in line to witness Mark Watney take on the red planet in living color on the big screen.

Normally, I don't keep track of Oscar nominations (it's not that I'm not above all that, or anything, I'm just profoundly forgetful and with a list of names that long I don't stand a chance), but this year I've Mark Watney and The Martian to root for, so I'm getting my head into the game. Right up until February 28th and the knock-down-drag-out brawl for best picture, I will be focusing my love for The Martian in the best way that I know how, through books. So, if you too find yourself marooned in the doldrums leading up to Hollywood's biggest night with Watney on the brain, give these 11 books a chance to win you over as you root for a best picture win.

Imagine a story that blends the very best elements of a mission into the vast reaches of the solar system (á la The Martian) with the high octane thrills of an interplanetary conflict and you've got Downbelow Station — an epic saga staged aboard a space station orbiting an alien world. So, if you're ready to push the envelope after so much time alone on the red planet, make your way to C.J. Cherryh's Hugo award-winning novel, and prepare for the ride of your life.

Even taking into account the scenes that occur aboard the Hermes as Watney's crewmates struggle with the aftermath of inadvertently stranding a colleague on Mars, The Martian is a movie that makes the most of the destination and leaves the journey by the wayside. When you're ready to expand your perspective on space travel, spend your time hurtling through the inky darkness with Kim Stanley Robinson — Aurora is the story of an epic, unpredictable space odyssey, and the perfect counterpart toThe Martian.

Celebrate the magic of a newly minted classic with a look back at one of science fiction's greatest adventure stories. The first novel in Arthur C. Clarke's beloved Rama series brings the alien planet to earth and unleashes human explorers on the technological wonder that is an alien space ship. If you're comfortable stepping off the red planet but you don't want to leave the mysteries of outer space too far behind, look no further than Rendezvous with Rama.

Andrew "Ender" Wiggins is still a boy when he embarks upon an epic quest to end a war between species and bring peace to the galaxy; of course, before he can set foot onto the battlefield, he has to make it through training at the academy. With wry humor and no shortage of heart, Ender channels Mark Watney's spirit on an adventure that spans decades, solar systems, and five exceptional novels.

The dual stream of Neal Stephenson's Cryptonomicon is populated by mid-20th century code breakers associated with the war efforts of Bletchley Park on the one hand, and later day tech geniuses working to bring peace to the world through cyber-intelligence on the other. Blurring the lines between historical fiction and techno-thriller, Cryptonomicon is brimming with the innovative spirit that kept Mark Watney alive on Mars, not to mention a whole lot of cold, hard science.

Ursula K. Le Guin's The Dispossessed pushes beyond the narrative of an isolated explorer stranded on a foreign planet to explore a world in which a lone colony of anarchists on a barren moon seek contact with society at large. If you caught the settlement bug after just a few hours alone with Mark in in the hab on Mars, you'll want to set some time aside for a rendezvous with The Dispossessed.

7. Good Omens: The Nice and Accurate Prophecies of Agnes Nutter by Neil Gaiman and Terry Pratchett

Admittedly, Gaiman and Pratchett's comic masterpiece sets aside the world of space and time for a deep dive into the realm of good and evil, but the humor that grounds Good Omens is the same dark, rich breed that elevated Mark Watney from astronaut to icon. So, whenever you're ready, set aside the hazards of life in space and follow the son of satan into a fight for the end of the world that will tickle your funny bone in all the right ways.

It has been quite some time since Americans fell headlong for the charms of the Apollo mission and embraced astronauts as the celebrities of the space age. In all its modern glory, The Martian calls to mind the epic history of man's journey to the heavens, and James Michener brings that journey to life for any fan who's ready to start from the beginning.

When he wasn't fertilizing spuds with human feces, The Martian's Mark Watney was focusing all of his energies on making contact with the blue planet. Carl Sagan's beloved novel Contact tackles that same interplanetary communication problem from an alternative perspective, probing the life of a young scientist dedicating her life to monitoring signals from outer space in the hope of making contact with alien life. Merging the miraculous potential of science with the adventurous spirit of a true believer, Contact is the perfect novel for fans of The Martian who are ready to venture beyond the red planet.

10. A Natural History of Dragons by Marie Brennan

11. As She Climbed Across the Table by Jonathan Lethem

There's nothing like satire to take the edge off of a stressful situation. So, while you wait with bated breath for the winner of best picture to be announced by the Academy, dig into Jonathan Lethem's deliciously entertaining look at the love between a particle physicist and a young anthropologist parsing the intricacies of interdisciplinary conflict, and let a little jab at the institutionalization of science fill the gap in your life left behind by the magic of the Ares III mission.