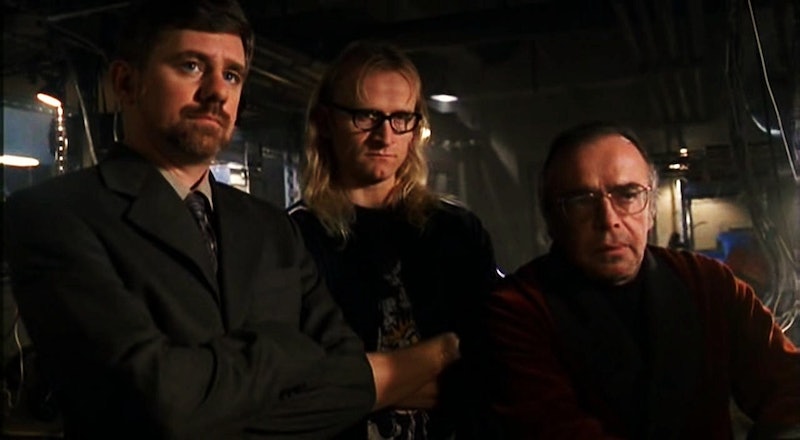 We're more than halfway through the rebooted X-Files mini-series, and quite frankly, I'm not sure what to think. So far, all we've seemed to establish is that the government lies, aliens probably exist, and the truth is still out there — all of which we knew 15 years ago but apparently felt the need to re-establish. Oh, and William. Everything is about William (but that's a whole separate article). The biggest highlights of this new batch of episodes, while heavy-handed at times, have been the references and occasional inserted footage from the original series, touching on some of the most important and emotional moments that all longtime fans will immediately remember. It's a nice touch, as is bringing back the likes of Skinner (how is he still working there?) and Cigarette Smoking Man. But they're not the only fan favorites making an appearance — The X-Files is bringing back the Lone Gunmen back on Monday night's episode. But wait... how is that possible?

In case you forgot, the Lone Gunmen — Langley, Frohike, and Beyers, that is — are actually dead, and have been since the Season 9 episode "Jump The Shark". The X-Files Season 10 comic book series retconned that and brought them back to life, so technically it's possible for them to be in the new series, but how many people really read the comic books? In the minds of most viewers, the Lone Gunmen are no longer part of this world, so how can the new series justify bringing them back? Creator Chris Carter just has to think outside the box.

"When you’re dead on the X-Files, you’re never necessarily gone," Carter explained to Entertainment Weekly. "There are ways to bring people back in dream sequences, flashbacks, and the like. This was an opportunity to use them, and bring them back to the show, in what is a presumed psychedelic hallucination ... I was sad to see them go. They were go-to characters when you needed weird exposition. I didn’t want to pretend that they weren’t dead, but I was looking for any way to bring them back."

Admittedly, I wasn't crazy about the Lone Gunmen in the original series. I didn't mind them, but I can't say that the new series would have been incomplete without them. Still, they are an important part of the X-Files universe, and finding a way to bring them back, even if it is via a psychedelic hallucination, will most certainly be appreciated by fans, including myself. I've been constantly searching for connections to the series I knew and loved so much growing up, and they provide an invaluable link to that past, so I'm all for it.

With only a couple of episodes left before this revival is gone from our screens again, very possibly for good, we need to enjoy every possible second.