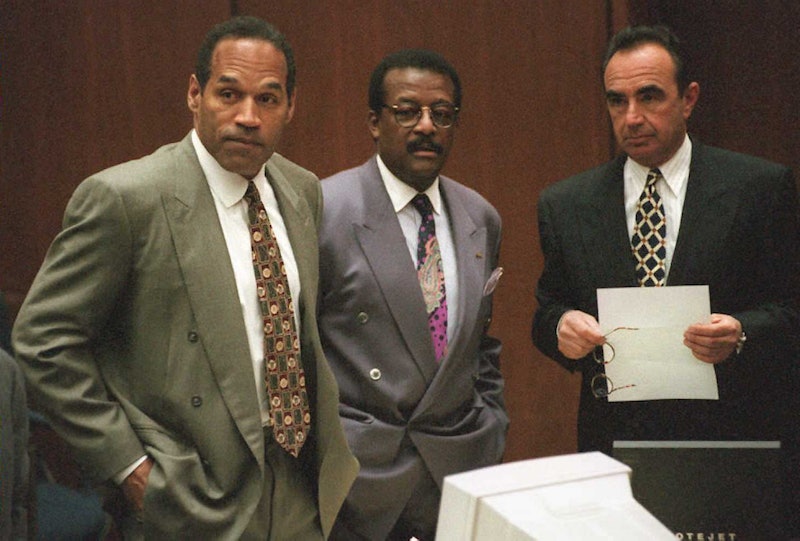 It's hard to believe that the O.J. Simpson murder trial ended more than 20 years ago. Where has the time gone? Like many of us who grew up in the '90s, I have vivid memories of watching much of the trial and certainly the verdict on TV in middle school. It was a case that scandalized the nation: a celebrated athlete accused of murdering his ex-wife, Nicole Brown Simpson, and her lover Ronald Goldman. To this day, the Simpson trial remains one of the most talked about criminal cases in history — in fact, FX began airing a five-part mini-series, American Crime Story: The People V. O.J. Simpson, earlier this month, proving just how relevant this case — and those who were involved with it — still are. Among them, Robert Shapiro, the prominent defense lawyer who represented Simpson during the murder trial and got him acquitted of murder charges in 1995.

Shapiro was admitted to the State Bar of California back in 1969, and since then has made a career representing high profile celebrity clients and corporations, from Johnny Carson and Darryl Strawberry to Occidental Petroleum and RockStar. However, it's his work with Simpson that he is perhaps best known for, and for good reason: he successfully got a not guilty verdict in the case.

Below are some videos of Shapiro during and after the trial that lend more context to his involvement and his work in toward insuring that Simpson went free.

Throughout the O.J. Simpson trial, Shapiro often addressed the public, sharing defense tactics and attempting to sway public sentiment in his client's favor. These speeches didn't give much away in terms of key information that could harm his efforts in court, but were at times extremely convincing, even to those who were unsure about Simpson's guilt or innocence.

Shortly after the verdict was announced, Shapiro stopped into Larry King Live to answer not only questions from King about the O.J. Simpson case, but from the general public, who called in to quiz the attorney on the ins and outs of the trial. During the interview, Shapiro insisted that he tried not to get caught up in the public uproar over the case and instead concentrated only on defending Simpson.

Just around the time Shapiro appeared on Larry King's show, he also answered a few questions from Barbara Walters and discussed the personal and professional challenges he faced after choosing to accept his role of defending Simpson.

In what seems to be a rather random (yet still totally interesting) interview which took place in 2004, Shapiro sat down to discuss his career in law, its highs and lows, and his feelings on the profession in general. While this interview doesn't pertain specifically to the Simpson trial, it's clear that his work on it changed his career indelibly.

While the Simpson trial may be two decades gone, one thing's for sure: it'll certainly live on in American culture for many decades more, and Shapiro is a central part of that mythology.