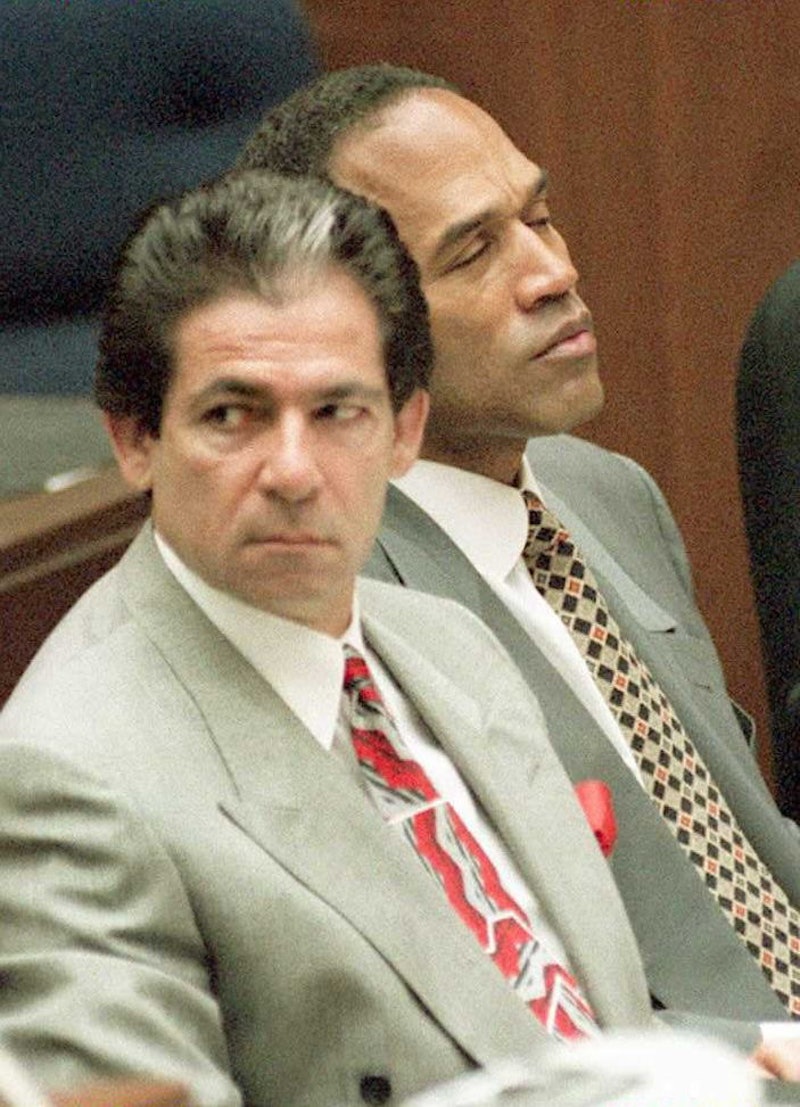 Though the true case behind The People v. O.J. Simpson: American Crime Story happened over two decades ago, the first installment of Ryan Murphy's anthology series feel relevant to a modern day audience for many reasons. One reason in particular being the inclusion of a family we all know too well: The Kardashians. The link, of course, comes from the man who acted as O.J. Simpson's defense lawyer when he was on trial for the murder of his late wife, Nicole Brown Simpson and waiter Ronald Lyle Goldman in 1995 (for which he was later acquitted), Robert Kardashian.

However, the late Kardashian patriarch had a long withstanding friendship with Simpson before the trial ever took place: The friends met in the 1970's and quickly hit it off, and, according to The Huffington Post, the pair and their respective families even spent holidays and vacations together. To say they were close would be an understatement.

It's difficult to imagine a time when the name "Kardashian" didn't stir up a media frenzy, but in 1994, right before Kardashian joined Simpson's defense team, the lawyer had lived his life relatively unnoticed. Until Kardashian read the controversial Simpson suicide letter during a live press conference in 1994, the world was unfamiliar with him. That, of course, quickly changed: In a somber tone and tuxedo, Kardashian — described as "Simpson Friend" — read Simpson's letter to the press. Part suicide note, part thank you letter to all those in his life he had felt stood behind him, the supposed parting words of Simpson — coupled by the infamous and ongoing white Bronco chase that day — left many baffled.

Shortly after the letter, Kardashian decided to join Simpson's legal team. An odd choice, it seemed, as Kardashian hadn't been practicing law for nearly 15 years, and didn't have experience in criminal trials — but he moved forward with the decision. However, though Kardashian's involvement in the case was questioned, whatever he — and the legal team — did, worked: Simpson was acquitted in the case. Following the news of Simpson's release, Kardashian sat down with Barbara Walters for a quick interview in 1995. Appearing distinctly more chipper and alert, Kardashian discussed everything from his friendship with Simpson to what Simpson was planning to do with his future.

Then, in 1996, Kardashian gave Barbara Walters a strikingly different interview. Though Kardashian always remained faithful to Simpson's innocence, during the interview, Kardashian admitted to having doubts. He said, "I have doubts. The blood evidence is the biggest thorn in my side; that causes me the greatest problems. So I struggle with the blood evidence.” When asked if he would do it all over again, Kardashian said "No. I would not get involved again." The aftermath to his family, business, and personal life were apparently too much to bear — something he only realized after the fact.

Kardashian's involvement with Simpson and the high-profile case affected his and his family's life in ways we can't really imagine — and, considering Kardashian sadly passed away in 2003 at the age of 59 eight weeks after being diagnosed with an aggressive form of esophageal cancer, he's tragically no longer around to speak on those effects. However, through videos of Kardashian speaking about the Simpson trial in the past, it's easy to get a sense of how complex and chilling the case must have been — and how difficult it must have been tod deal with first-hand.