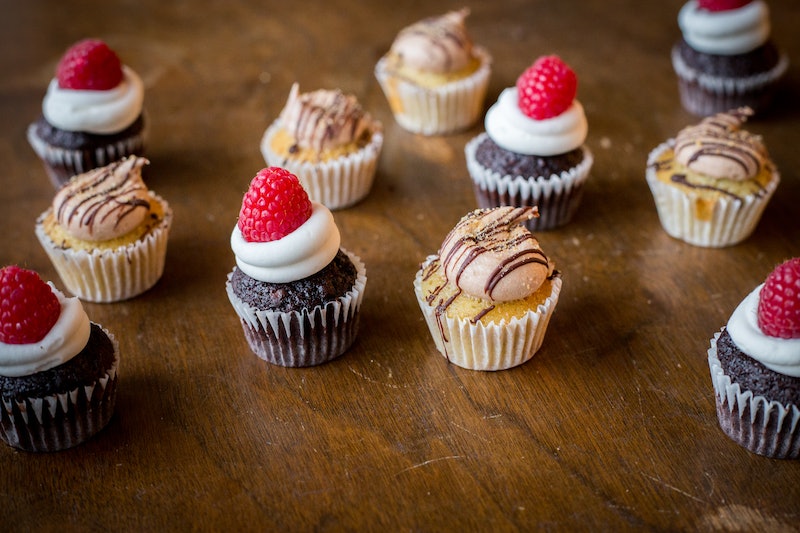 Whether or not you've asked someone to "Be Mine," take the day to treat yourself with these boozy cupcake recipes just in time for Valentine's Day. The holiday is all about love, and what comes before anything else is loving yourself — especially by way of baked goods and booze. You don't have to decide between dessert and drinks with these two recipes that bring you the best of both. Whether you're returning home after surviving an overpopulated restaurant to fulfill a reservation that was made six months ago, or (more wisely) chilling in total comfort on your couch, snuggled up or solo, reward yourself with a delectable treat of the alcoholic variety.

Prohibition Bakery in New York, the city's "original alcoholic cupcake company," teamed up with Pinnacle Vodka to deliver two special edition cupcakes. The cupcakes aren't available in store, but they can be recreated at home with these recipes. Both cupcakes promise an exciting edge by way of Pinnacle Vodka — "Berry In Love" is a dark chocolate beauty with a Pinnacle Raspberry vodka white chocolate ganache core; "S'more Love" takes marshmallow fluff to the next level by mixing in Pinnacle "Whipped" and topping it off with crushed graham crackers.

Whatever your plans this Valentine's Day, make sure to indulge in this sweet treat that's guaranteed to satisfy all your cravings. But as Prohibition Bakery disclaims, "Please eat responsibly."

To Make the Cake:

In a large bowl, cream butter and sugar until light and fluffy.

Add the egg and beat thoroughly.

Measure flour, cocoa powder, baking soda, and salt in a bowl, and set aside.

Stir buttermilk and Pinnacle® Raspberry Vodka in another bowl.

Alternate adding flour and buttermilk mixtures a quarter at a time, beating between each addition.

To Make the Filling:

Finely chop white chocolate and set aside in a heatproof bowl.

Heat cream on low until tiny bubbles form around the edges. Do not allow cream to boil.

Let rest for 30 seconds, and then whisk until smooth.

Slowly add in Pinnacle® Raspberry Vodka one tablespoon at a time, stirring thoroughly between each addition.

Transfer ganache to a squeeze bottle. Let cool for at least one hour before using.

To Make the Frosting:

In the bowl of a standing mixer, beat butter until smooth.

Slowly add in confectioners’ sugar with mixer on low speed, and beat thoroughly.

Slowly stream in Pinnacle® Raspberry Vodka, and beat until smooth.

Transfer to a piping bag.

Using a small piping tip or the end of a steak knife, core a hole into the center of each cupcake.

Garnish with a single raspberry directly in the center of each cupcake.

To Make the Cake:

Preheat the oven to 325, and line baking pans with cupcake liners.

Heat water and butter in saucepan over low heat until butter is completely melted, taking care not to let the mixture boil.

In a food processor, process an entire sleeve of graham crackers until completely crushed.

Add sour cream and egg to the mixing bowl of a stand mixer and beat on low until completely mixed.

Once baked, let cupcakes cool completely on a cooling rack or sheet pan before assembling.

Melt chocolate for frosting and garnish (six ounces) in microwave or in a double boiler on low heat.

In the bowl of a standing mixer, beat butter until smooth.

Slowly add confectioners’ sugar with mixer on low, and beat until lumpy.

Add Pinnacle® Whipped® Vodka a tablespoon at a time, and beat until smooth.

Add half of melted chocolate to frosting, and beat until completely mixed.

Let other half of the melted chocolate cool for 15 minutes, and then transfer to a squeeze bottle.

To Make the Filling:

Once cupcakes are cool, core each cake with a small piping tip or the end of a small knife (such as a steak knife).

Drizzle melted chocolate over cupcakes in a zip zag pattern, and then sprinkle with crushed graham crackers.