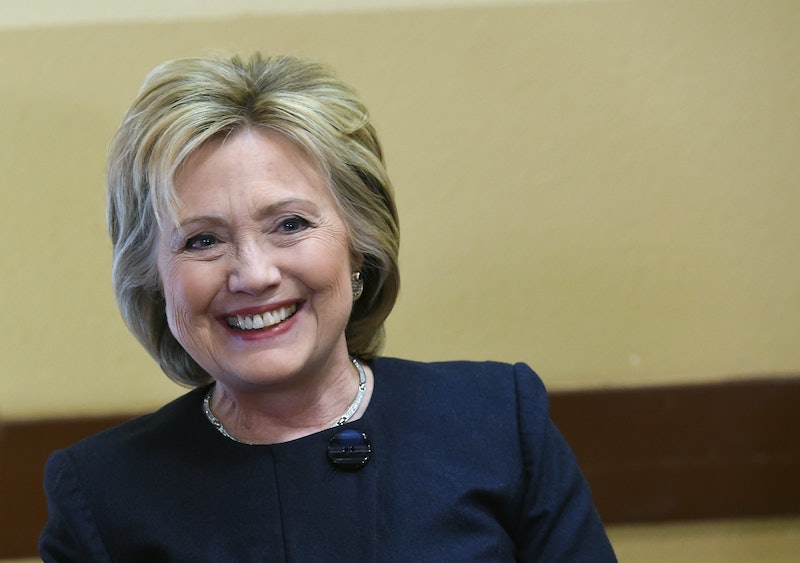 On Saturday, the remaining six Republican presidential hopefuls took the stage in yet another GOP debate. With the South Carolina Republican primary coming up on Feb. 20, Donald Trump, Ted Cruz, Marco Rubio, Jeb Bush, Ben Carson, and John Kasich debated in the state, all trying to convince voters that they should be the party's nominee. As always, Hillary Clinton responded to the GOP debate on Twitter, saying that it wasn't even worth live-tweeting.

Just like you can expect Trump to personally attack one of his GOP opponents in every debate, you can count on the Clinton campaign to issue immediate responses to what the Republicans say on the debate stage, poking fun at the party rivalry and stating why she strongly disagrees with the candidates on stage. Clinton's obviously not invited to the Republican shindigs, but she has no problem inserting herself into the conversation. After all, she is one of the main people (along with President Obama) the GOP contenders attack endlessly, so she can't just sit back and silently take all the criticism.

Saturday night, Clinton spoke at a Colorado Democratic dinner, so her team didn't live-tweet the debate to the same extent it normally does. Nevertheless, her campaign found the time to tweet the major takeaways from the GOP showdown.

Pointing out troubling aspects of the Republican event, Clinton tweeted: "Demonizing immigrants, dangerous foreign policy proposals, and nonstop bickering—no need to live-tweet #GOPdebate. We've seen enough." Maybe her campaign got tired of attacking her GOP rivals on immigration, women's rights, national security, and the economy during every debate, on top of being turned off by the constant screaming matches. Stating that the debate wasn't even worth her time is almost more insulting than live-tweeting her rebuttals — essentially, she asserted that the Republicans are so out of control, she won't give them the time of day.

After the event wrapped up, Clinton had one more simple response: "Takeaway from #GOPdebate: We can't let one of these guys rip away the progress we've made." Her feelings are pretty straightforward — she wants to be the next president and definitely doesn't want to see a Republican in the White House. Who would have thought?

More like this
Michigan’s Governor Is “Going To Fight Like Hell” To Protect Abortion Access
By Andrea Zelinski
LGBT+ Men Fleeing Afghanistan Were Denied Asylum By The Home Office, New Findings Show
By Sam Ramsden
Cardi B Explains To David Letterman Why She Uses Her Star Power For Politics
By Jake Viswanath
Kim Kardashian Remembers Her Last Words To Death Row Victim Brandon Bernard
By Jake Viswanath
Get Even More From Bustle — Sign Up For The Newsletter