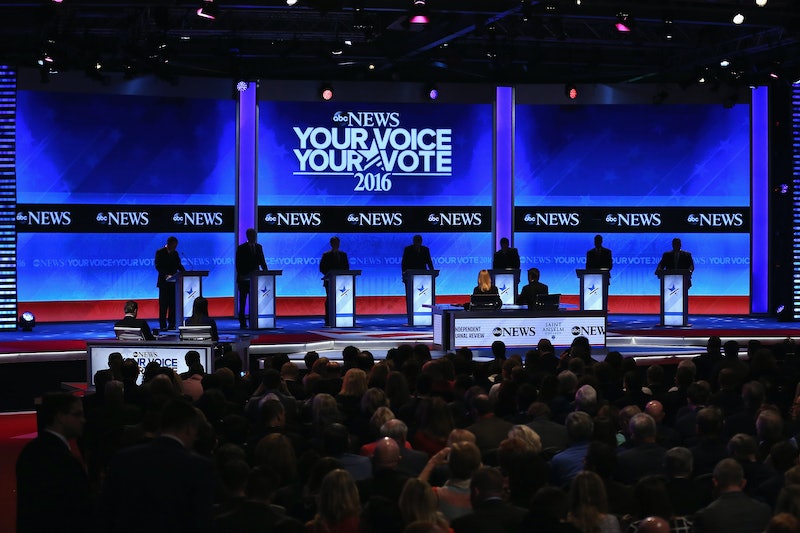 The last GOP debate before the South Carolina Primary took place in the Palmetto State on Saturday night. Six candidates took the stage following a wild New Hampshire Primary that saw Donald Trump win handily. Chris Christie and Carly Fiorina dropped out in light of their low polling numbers, as did Jim Gilmore. Thus, it is now down to Trump, John Kasich, Ben Carson, Marco Rubio, Ted Cruz, and Jeb Bush, all of whom took the stage at the Peace Center in Greenville. There is certainly a lot riding on this pivotal debate and Saturday night was an important time for candidates to lay out their presidential plans. Sadly, that was not to be as the event appeared to slip away from its intended purpose. The GOP debate loser was the person who lost control of the showdown itself, CBS moderator John Dickerson.

Candidates were forced to think on their feet as Dickerson addressed what was on the minds of all who watched — the sudden death of U.S. Supreme Court Justice Antonin Scalia. A moment of silence to honor Scalia kicked off the event. The Associate Justice was frequently evoked throughout the debate with presidential hopefuls paying tribute to one of the most unique, verbose judges to grace SCOTUS. The issue of President Obama aiming to pick a nominee to succeed Scalia before he leaves office was also repeatedly touched upon. Following that line of questioning, things began to devolve between Dickerson and the candidates.

Dickerson was booed by the audience after questioning Cruz on a key point regarding SCOTUS justices being confirmed during election years. His handling of the war of words between the likes of Rubio and Cruz as well as Trump and Bush was met with candidates deliberately talking over the moderator. At one point Dickerson even said "don't make me turn this car around," his joke falling flat to no avail. He was repeatedly interrupted midway through questions as candidates continued to fight. The bell signifying a candidate had used all their time up repeatedly went ignored as well.

"The bells are ringing, sir," Dickerson pleaded with Trump as he continued to talk over the time allotted in the middle of a particularly heated spat with Bush. At one point the flustered moderator appeared to give up altogether, stating that he'll "ask the question, you do what you want" when attempting to ask Rubio a question. Dickerson is no stranger to moderating presidential debates, having assumed the duty earlier in the election season during a Nov. Democratic debate. Saturday night was not his best showing, marking a major contrast between his previous performance.

For all of Dickerson's witty quips and asides, not a single one appeared to show the candidates onstage that he meant business. The debate was sadly reduced to what amounted to a glorified yelling match between presidential hopefuls. Very few laid out legitimate rhetoric regarding hot button issues like immigration, foreign policy, and economics. Though Dickerson challenged Cruz, he sadly fell short throughout the rest of the debate, as did many of the candidates onstage as a result.