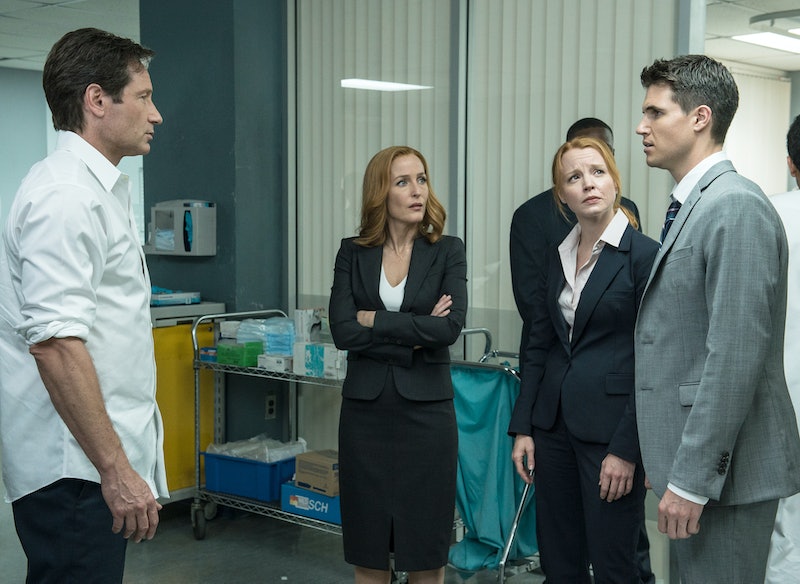 There's no one in the world quite like Mulder and Scully — but the partners are about to meet two people who bear a striking resemblance to them when Agents Miller and Einstein join The X-Files for the revival's final two episodes. According to FOX's official synopsis, the Feb. 15 episode "Babylon" will introduce us to "a pair of younger FBI agents," played by Robbie Amell and Lauren Ambrose. In the revival's penultimate episode, the pair will "push Mulder and Scully to examine their own beliefs" as they continue to seek answers to their ongoing professional and personal mysteries.

Based on a teaser clip, it looks like Miller and Einstein will come knocking on Mulder's door fairly on in the episode — prompting to Scully to dryly answer that nobody's down there but "the FBI's most unwanted," which is the same warm welcome Mulder gave her when they first met. She's been waiting 23 years to say that and it felt "pretty good." This reference to the pilot could be an indication that everything will come full circle as the revival concludes — and Miller and Einstein may be instrumental when this happens.

When the agents enter the room, viewers will basically be seeing double — and not just because the younger agents bear physical similarities to Mulder and Scully. Agent Miller is a profiler obsessed with the paranormal, while Agent Einstein is a no-nonsense medical doctor who would prefer to head back to Texas rather than explore supernatural methods to potentially solve the case of the week. Check it out:

As if their character descriptions aren't enough of a giveaway, even the new agents' names are a nod to their older counterparts — Miller obviously sounds a lot like Mulder, and Scully wrote her thesis about Einstein's Twin Paradox. In an interview with Entertainment Weekly, Ambrose explained that showrunner Chris Carter wanted Einstein's character to be "powerful" and "kind of a ball-breaker." That certainly sounds very similar to another strong-willed redhead who's beloved by X-Files fans everywhere.

How will Miller and Einstein click with Mulder and Scully? That remains to be seen, but Ambrose confirmed in the same EW interview that Einstein will return for the revival's finale and, according to Amell's IMDb page, Miller will also appear in "My Struggle II" — so, regardless of the outcome of the "Babylon" case, it seems likely that the four agents find enough common ground to warrant working together again. Ambrose teased her role in the finale: “[Mulder and Scully] need to figure out how to solve a giant problem, and once again, I’m there to help."

The introduction of Miller and Einstein has sparked rumors that the two will get their own X-Files spinoff — which Ambrose and Carter have said is not out of the realm of possibility, although nothing is currently in the works. Either way, Miller and Einstein's presence in the finale, which will likely be the revival's most important episode, indicates that their purpose on the show goes beyond the humorous idea of introducing Mulder and Scully 2.0. It sounds like Miller and Einstein will have the opportunity to help Mulder and Scully save the world before the revival ends — and that would be a pretty amazing X-Files legacy, regardless of what the future holds for these two characters.