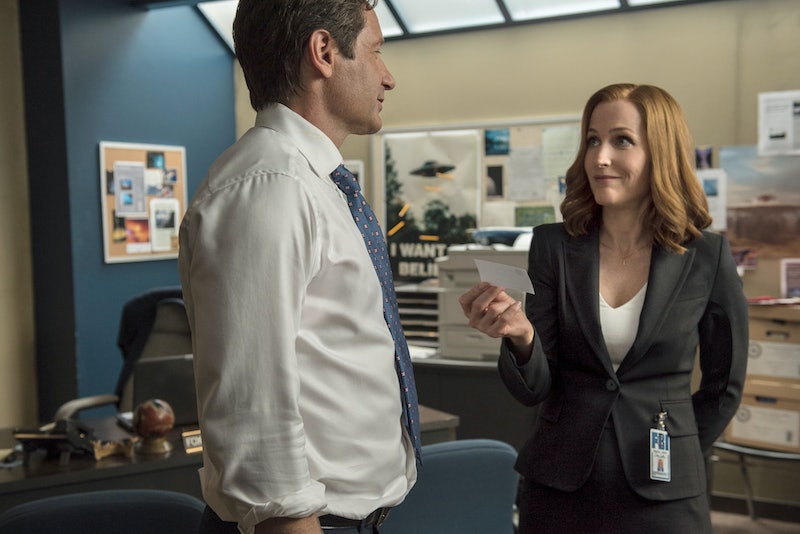 It feels like the revival just began, but we've already reached the penultimate episode and it brought us Mulder and Scully's doppelgängers (aka Agents Miller and Einstein) along with a case of the week that's both timely and sensitive — the four agents investigate a suicide bombing in The X-Files episode "Babylon." After extremists bomb an art gallery that contains offensive depictions of Muhammad, one of them survives and is hospitalized in a persistent vegetative state. While Scully is on her own personal mission to come to grips with her mother's recent death, Mulder persuades Agent Einstein to administer a hallucinogen that he believes will enable him to communicate with the comatose terrorist in order to learn what he's thinking and, more importantly, gain intel that could potentially prevent future attacks.

The result is Mulder on an acid trip of sorts, which would have been hilarious if it had occurred in an episode that focused on a less sensitive topic. Since we live in a world where, for many people, suicide bombings are a daily threat, it felt jarring to have a comedic sequence in an episode that also contained disturbing images of people running out of an art gallery on fire and the bomber lying disfigured in his hospital bed. Furthermore, "Babylon" did raise plenty of serious, thought-provoking questions about the power of ideation and what drives young men to carry out suicide missions — and the comedic element felt out of place.

If it had been a different episode, I would have loved to watch Mulder line dance in a cowboy hat. Perhaps part of the problem with only six episodes is that showrunners understandably want to tackle a number of serious, timely issues and provide viewers with the comedic aspects of the show that we know and love. Since they're trying to cover so much ground in so little time, it's not surprising when certain plotlines fall a little flat. In some ways, I felt like I was watching two separate episodes — one which raised thought-provoking issues about what compels young men to carry out suicide missions, and one that would have been far better suited to a lighter "case of the week."

Ultimately, Mulder's trip (which Einstein informs him was the result of a placebo) combined with Miller's knowledge of Arabic yield answers — when the bomber's mother arrives at the hospital, Mulder recognizes her and she's therefore allowed into her son's room to say goodbye before he dies. And, most importantly, he recalls several words that the bomber spoke to him in Arabic, which Miller is able to translate as "Babylon Hotel." This translation leads them to a hotel where another group of suicide bombers is preparing to carry out their next mission.

Although it would have been less "entertaining," I think it would have been in better taste to have the fantasy sequence purely exist for serious reasons in this particular context. The main reason is the episode's subject matter, but the Lone Gunmen's disappointingly brief appearance felt like a missed opportunity — Mulder was absent from Season 9 when his friends sacrificed their lives to stop a bioterrorist, so he never even had the closure of paying his last respects to them. (Scully and Skinner were shown at their graves in the aptly titled episode "Jump the Shark.") And, since so much of this season has focused on Scully's grief about William, it would also have been interesting to see Mulder tap into the emotions he's been concealing from her. As he tells Scully in the episode's final scene, Mulder saw "deep and powerful" things during his "trip" — and I wish the sequence itself had focused solely on those moments.