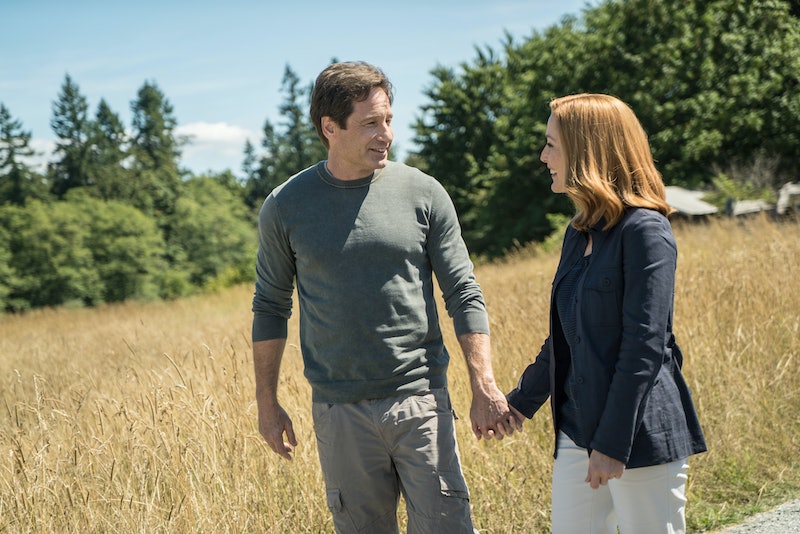 During the revival's penultimate episode, Mulder and Scully both had quite a week in Texas. His trippy experience lead to a revelation that prevented a second terrorist attack, while she struggled to come to terms with her mother's recent death and the unanswered questions Margaret left behind. The Feb. 15 X-Files episode "Babylon" used a variety of tactics and plot devices to ultimately stop a terrorist attack, and despite an attempt to intersperse comedy, the theme was decidedly dark as the agents repeatedly tried to understand how the power of words and ideas can drive young men to carry out suicide bombings. But, it ended on a hopeful note as Mulder and Scully reconnected in a personal setting to have a conversation about the power of truly listening.

Both these characters have been on an emotional roller coaster throughout the revival — Mulder has emerged from the seclusion of his house and is, once again, rejuvenated by his work searching for "the truth." And, despite experiencing a whole lot of heartache between her guilt about William and the death of her mother, rejoining the X-Files seems to have done Scully a world of good as well. She looked fairly uninspired by her hospital job in the premiere, but told Mulder that she was having a whole lot of fun during the "Were-monster" case and immediately sought comfort in her work moments after losing her mother.

At the end of "Babylon," Scully goes to Mulder's house to ask him about why he didn't tell her about his "little scheme." His answer is that she never would have bought it — and she tells him he's absolutely right. (Some things never change.) During what Scully playfully refers to as his "magical mystery tour," Mulder tells her he saw powerful things, like deep and unconditional love. But, back in reality, Scully saw different things — namely, unqualified hate that seemingly has no end. They agree that reconciling these two things is the question of our times, and perhaps this is a hint at what's to come in the revival's finale, when they'll attempt to save the country from "powerful enemies."

Scully's surprised to hear that Mulder has been thinking about God — although he doesn't disrespect her Catholic faith, believing in God has always been one more way the agents are polar opposites. This illustrates Mulder's evolution as a character — he "wants to believe" again, but he no longer immediately chalks everything up to the paranormal. Although he doesn't believe in God, Mulder now seems more open to the idea of God, and it mirrors Scully's evolution in the initial series when she went from a complete skeptic to someone who was willing to acknowledge that paranormal powers were sometimes at play. They've challenged each other to become more open-minded, and they're both better agents and people because of it.

When Mulder asks Scully where the hatred will end, she suggests that maybe it can end where it began — by finding a common language, opening our hearts, and truly listening. The X-Files has often come down to Mulder and Scully recognizing that, although their beliefs lie with different powers, they ultimately believe in many of the same things — the dialogue in "Babylon" is strikingly similar to what was said in the series finale when Mulder told Scully he wanted to believe that the dead aren't lost to us, and "if we listen to what's speaking, it can give us the power to save ourselves."

The revival's finale, "My Struggle II," sounds like it will be the ultimate showdown between good and evil — and this conversation between Mulder and Scully suggests that finding a common language could be key to solving both their professional and their personal mysteries.