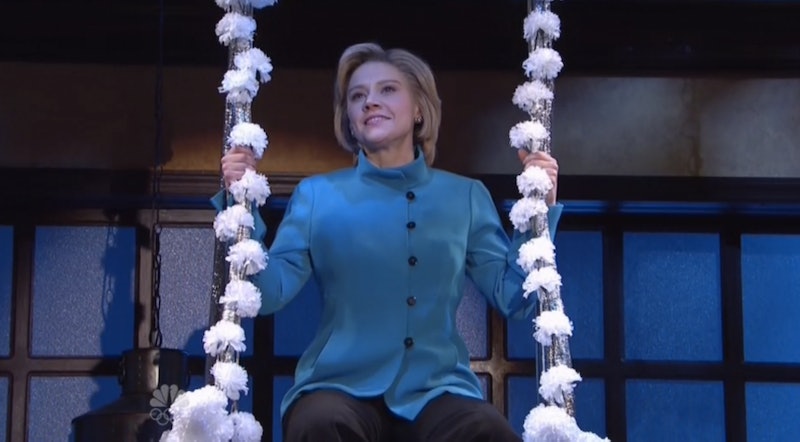 If you've been keeping up with the presidential race at all, you've likely heard about the backlash Gloria Steinem and Madeleine Albright have received for their comments about women who don't support Hillary Clinton. In short, Albright said, "There's a special place in Hell for women who don't support women," as reported by The Washington Examiner, but she was referring to women who aren't supporting Clinton as our next president. She later apologized for the comment. Steinem, meanwhile, suggested that some women support Bernie Sanders because "the boys are with Bernie." To join in on the conversation, this week's Saturday Night Live opened with a sketch about a group of people who support Bernie Sanders over Clinton, and Cecily Strong's character made sure to mention the anti-feminist, feminist messages of Steinem and Albright.

In the sketch, Strong's character said she was voting for Clinton because it was her feminist duty to support another woman, according to Steinem and Albright. Characters played by Aidy Bryant and Kate McKinnon quickly corrected her and made sure she knew that women supporting Clinton based solely on her gender is actually pretty sexist. Throughout the 2016 presidential election, Clinton has struggled to win the support of millennial women, especially after Albright's comment about women going to Hell. Specifically, progressive millennials don't identify with Clinton's "brand of feminism," according to The Daily Beast, because many view it as "first-wave" feminism, rather than the most recent second-wave feminism.

Recognizing the gravity of her words, Albright wrote an apology in the New York Times on Feb. 12 for her comment condemning women who don't support other women. In Albright's apology, she clarified that although she believes women should support other women, she absolutely does not believe in women supporting Clinton solely based on their mutual gender.

However, I do want to explain why I so firmly believe that, even today, women have an obligation to help one another. In a society where women often feel pressured to tear one another down, our saving grace lies in our willingness to lift one another up. And while young women may not want to hear anything more from this aging feminist, I feel it is important to speak to women coming of age at a time when a viable female presidential candidate, once inconceivable, is a reality.

Clinton has a long way to go to win over the Progressive Millennial Feminists, and it seems even the writers of Saturday Night Live recognize that. I'm glad they took some time during Saturday's episode to mock these now notorious "feminist" messages and bring more attention to these issues.